CODOH’s Campus Project, which took off with a roar at the start of the school year in September, surged ahead in October. The attention-getting $25OK reward offer for setting up a TV debate with the ADL has now run at over a score of colleges and universities across America, in publications with a combined circulation of over two hundred thousand.

At nearly every place it has appeared, the audacious ad that, blasts away at the ADL-enforced taboo against debating the Holocaust has aroused controversy, outrage, and interest among students, professors, and administrators, as well as a broader, non-academic audience of gentiles and Jews.

If there were anyone who still doubted the real efficacy, and the even greater potential of the Campus Project, the indications of anxiety from the chief custodians of the Holocaust cult that continued to multiply in the face of CODOH’s continued, and intensifying, ability to direct university audiences to its powerful cyberspace arsenal of revisionist scholarship, CODOHWeb, should prove the Project’s worth.

Last February 6, the Atlanta Journal-Constitution ran a brief story that stated: “An ad, so small that it might easily be overlooked, has caused a big stir at Georgia State University among students and faculty members because it directs readers to a Web site challenging certain aspects of the Holocaust. Funded by Bradley Smith, who calls himself a revisionist, the ad clearly questions whether gas chambers were used....”

That was then, this is now. As reported in last month’s Smith’s Report, the large (4” x 10”), impossible-to-overlook $250K reward ad set off a major uproar at Georgia State, an uproar that has not yet really subsided. The ad sparked at least two lengthy articles in the Atlanta Journal-Constitution, and has continued to attract articles and letters in the GSU Signal.

The dozen new ads published in the past thirty days have ignited campus controversies similar to those at Georgia St., the University of Wisconsin at Oshkosh, and California St.-Fullerton (see SR 58). At Indiana University-South Bend, where the reward ad was published in the Preface (circulation 4,000) on September 23, as at other campuses, the ad was news off campus, as the city South Bend Tribune reported “Ad Denying Holocaust Causes Stir at IUSB.” Despite the predictable tumult on campus, ten members of the IUSB faculty in effect endorsed CODOH’s call for open debate by placing a half page ad in the Preface, listing resources students can consult for “accurate” information about the Holocaust. While the storm of protests against the ad wrung a half apology from Preface editor Rebecca Ferguson (she said that she was sorry, but that she might well run the ad again!), and a public forum on the ad arranged by the Preface for the IUSB community (presumably so they could “vent”), the damage had been done—in the hard eyes of the ADL and the other watchdogs from the Holocaust lobby.

At Kent State, where the ad ran on October 8 in the Daily Kent Stater (circulation 14,000), the chiefs of KSU’s Jewish student groups (including the president of Hillel, which tracks revisionist doings on campus nationwide for the ADL [see SR 42], and the president of the Jewish United Students) published an angry letter in the Stater which included this memorable sentence: “History is not debatable.” The editors of the Daily Kent Stater fired back on October 21 with a staff editorial that made the nationwide U-Wire Today, an Internet Website that runs articles of interest from the campus press across America, in which they disagreed with CODOH’s revisionist position, but stated: “The Holocaust, like every other historical event, is open to interpretation,” and affirmed “It is up to the individual... to decide what they believe or endorse.” More heresy for the Holocaust cult!

At Marquette University in Milwaukee, where the reward ad ran on September 29 in the Marquette Tribune (circulation 7,500), the editors seem to have compounded their sin of accepting the ad. Not only did the editors err by not apologizing, noted Professor Richard A. Abrams of the School of Dentistry in a letter to the Tribune, but they also mistitled an op-ed piece attacking our ad: “Holocaust Denial Argument Lacks Strong Evidence.” According to Abrams, the title should have read: “Holocaust Denial Argument Is Totally Without Merit.” Once again, the damage was already done—and, on reading Professor Abrams’s angry screed, which in its demands exceeds any free-speech offense of Marquette alumnus Senator Joseph McCarthy, we’ll give his dentist’s chair a very wide berth.

At Wayne State University in Detroit, where our reward ad ran on September 16 (see SR 58), the campus controversy was still lively enough a month later for the WSU South End (circulation 10,000) to open its pages to the president of the university, Irvin D. Reid. “WSU President Reid Speaks Out” proclaimed the headline, and speak out he did, trumpeting the by-now obligatory Holocaust pieties. Lest he be somehow, even inadvertently, tarred with the stain of bigotry, President Reid delivered himself of this forceful line: “I reject any and all forms of racism and prejudice, including any which would create doubt where none should exist.” But the doubt was out, and the damage was done.

CODOH’s reward ad in the Stanford Daily (circulation 16,000) on October 1 caught the eye of the editors of the Forward (New York City), a small but influential Jewish newspaper with a national circulation (October 9). No apologies from the Stanford Daily to the Forward: “...the Holocaust deniers’ ad met the Stanford Daily's standards of decency.” Sole consolation (for the Lobby): first daughter Chelsea Clinton is on leave from Stanford while the nation ponders her dad’s standards of decency—of course, if she’s keeping up with events on campus, she can access CODOHWeb from the White House.

Despite being plugged in by phone, by fax, and via the Internet to the campuses on which CODOH has advertised (and those which haven’t yet run the ad), we are sure that only a fraction of the news-including published news—of the stir which our ads cause is coming back to us. That’s because in most cases getting much more than tear sheets, or copies of the ad as run, depends on more than ordinarily friendly editors, or CODOH contacts on campus or in the area. As yet, declared campus supporters of CODOH are few, and so we are able to report only fragmentarily on such items as the summoning of the editor of the SUNY-Plattsburgh (NY) Cardinal Points (circulation 6,500) to a special Star Chamber-style meeting with the university president and (at that legally secular state university) the Hillel rabbi.

At this time we don’t now if it happened, or if so, what ensued: we are as tantalized as you are.

CODOH’s sustained ability to make its advertised challenge to the Holocaust cult news at campus after campus in America should not mislead revisionists into thinking that victory is at hand in the war for historical truth on this key issue. It would be more accurate to say that we are gaining the upper hand in the debate about open debate on the Holocaust. Students (and their professors), like most Americans, are still reluctant to voice questions about the historical, as opposed to the free speech, implications of CODOH’s ads.

Nonetheless, we are receiving an increasing number of indications of covert revisionist activity on campus. An informant at Kent St. tells us that IHR’s excellent revisionist pamphlets keep appearing in the library there. In August, the appearance of a leaflet entitled Fight the Lies of the Holocaust on the campus of the University of California at Los Angeles resulted not only in the usual outcries but in the publication of a letter by Bradley Smith in the UCLA Daily Bruin. There Smith not only cited the arguments of Carlos Porter and Roger Garaudy, but included the address of CODOH’s powerful Website, CODOHWeb.

It is CODOHWeb, which offers students nearly instant computer access to an up-to-date, state-of-the-art archive of Holocaust revisionism, that continues to give CODOH’s Campus Project its bite. Controversy breeds curiosity; attacks arouse interest—and by accessing CODOHWeb intelligent students can see, and judge, for themselves and by themselves.

Nobody knows this better than the Holocaust lobby, of course. That’s why the Forward is concerned about our ad running at Stanford—and at Cal Tech, to name another elite West Coast school where our ad appeared (September 18). It’s why the Detroit Jewish News sought an interview with Smith, and why the American Jewish Committee’s specialist on “extremism,” Kenneth Stern, deplores Holocaust revisionism as “increasingly sophisticated” in its scholarship and “is particularly concerned by their marketing techniques which target young people... and college campuses” (from the weekly Brooklyn Papers, Brooklyn, NY, August 7).

For the last word on CODOHWeb, we turn to a representative of our very reluctant debate opponent, the ADL. Laura Kam, assistant director for public affairs at the ADL’s Jerusalem office, outlined to the Jerusalem Post (October 23) one of the Holocaust lobby’s Internet nightmares, as follows:

Let’s say that a youngster is doing a paper on the Holocaust and goes to a search engine. If he writes “Holocaust,” he’ll get not only Yad Vashem and other legitimate sources of information, but also the Web site of Bradley Smith, a major denier of the Holocaust, whose site looks as legitimate as Yad Vashem’s. Smith’s lies could then be incorporated into the school report and be passed on and on.

“Looks as legitimate as Yad Vashem’s”? No doubt Ms. Kam meant that as a compliment. But one has to sympathize with Ms. Kam: If she and her bosses are really worried about school boys blundering across CODOHWeb, they must be terrified by the prospect of thousands of college students and professors deliberately seeking out and carefully measuring CODOHWeb. 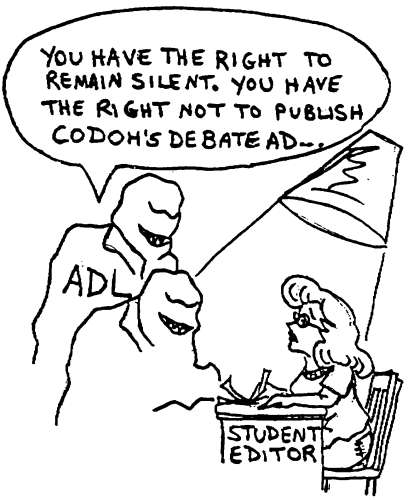 Now, you can publish it.

Eight years ago the Committee for Open Debate of the Holocaust’s Campus Project started placing ads on campus aimed at opening college and university minds to the revisionist case against the orthodox line on the Holocaust. What began as the work of one man, Bradley Smith, in placing one column-inch ads offering a list of book titles and an occasional letter to the editor, has blossomed into a national advertising campaign that makes news just by running ads, and directs students, professors and interested lay persons by the thousands—more than 4,000 revisionist documents (not counting graphics) were accessed daily on CODOHWeb during the month of September—to Butz, Berg, Faurisson, Garaudy, Rudolf and dozens of other scholars in literally hundreds of articles. Now Smith has the steady help of a number of skilled volunteers—and the help of a small but growing number of supporters, like yourself, without which CODOH’s work is impossible.

At CODOH we’re proud of what the Campus Project has achieved in terms of bringing the case for Holocaust revisionism to the attention of media, of academia, and of Americans from all walks of life. But we’re painfully aware that we can’t rest on our laurels—that we’ll have no laurels until we and the revisionist scholars whose work we champion have a fair chance to make our case before the nation and the world. We are expanding and intensifying the Campus Project, and our global Internet outreach. We aim to win this face-off, not simply raise a ruckus here and there. With your continued help, we will.