CODOH Leads in Fight for U.S. Publication of Goebbels

As promised in last month's SR, in response to the suppression of publication of David Irving's Goebbels: Mastermind of the Third Reich, Committee for Open Debate on the Holocaust mounted a campaign to notify publishers and editors of the accessibility of the book's actual content and Irving's introduction to the book, at CODOH's site on the World Wide Web.

Our press release, mailed electronically to some 600 newspaper editors and book publishing and media executives, alerted them immediately to the availability of the facts on Goebbels, including the exclusive publication of Irving's Introduction to Goebbels, to be had at CODOH's Website.

Until the CODOH release, the lies and smears of such groups as the ADL had been the book industry's sole source of direct, up-to-date information on Irving and revisionism. Now, it seems, Irving's biography of Goebbels is being seriously considered for publication by Random House, as well as other unidentified publishers in New York. In a story in the New York Post (April 24, 1996), Steve Wasserman, editorial director of RH's Times Books division, is quoted as follows:

I honestly do believe this book should be given a serious hearing... It appears to be a serious book by a controversial, yes, but ultimately serious historian of the Third Reich, and I say the public has a right to read it, and we should render its judgement at the marketplace.

Wasserman, who is Jewish, further stated (in a comment that, while half true, demonstrates the dysfunctionality of public discourse on the question to hand):

Obviously, it's precisely a Jew who should be publishing this controversial biography and not a non-Jew, where the move would be instantly misconstrued as being an obvious anti-semitic act.

CODOH has no way of knowing whether its press release alerting editors to its Website found its way directly into Wasserman’s hands. We do know that news of a hot topic -one that's forbidden fruit, no less — moves like wildfire among interested parties, above all when they’re connected by phone, fax, and the Internet. 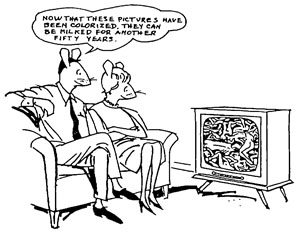 Text: Now that these pictures have been colorized, they can be milked for another fifty years.
ADL family watching late-night TV.

Meanwhile, in response to a query' from this writer as to when and if Goebbels is published here, might it not be controversial to some revisionists as well as exterminationists, Irving wrote:

Revisionists may well find much of my Goebbels. Mastermind of the Third Reich unpalatable: I disprove the prevailing theory (propagated most forcefully by revisionist Ingrid Weckert) about the Kristallnacht: I accept and prove that Goebbels was indeed the prime mover; I go into detail about the role of Goebbels and Speer in expelling the Jews from Berlin to first “the East,” then “Auschwitz”—while allowing only that Auschwitz was a slave labour camp with a very high mortality rate. Exterminationists will not like that the book, along with Goebbels himself, looks at the reasons why the Jews were widely disliked in Central Europe from the Weimar time onwards; the Jewish community (= ADL) does not like this topic to be ventilated at all. Soon no doubt it will become illegal to discuss it. The Holocaust came from “out of a clear blue sky,” with no rationale or justification, no rhyme or reason, whatever. So how come, if we are to believe Goldhagen, that millions of Germans willingly joined in?