Working in tandem with independent American revisionist scholar Samuel Crowell, the Committee for Open Debate of the Holocaust has fired the first gun in a campaign to expose fake evidence of a homicidal Nazi gas chamber on prominent display at the U.S. Holocaust Memorial Museum in Washington, D C.

Samuel Crowell made the discovery that the replica of a door claimed to have been manufactured for an alleged homicidal gas chamber at the Majdanek concentration camp is identical with gas-tight air raid shelter doors widely advertised and sold in Germany before the war. 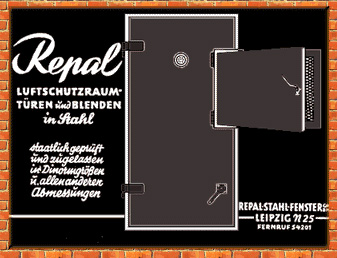 Bradley Smith is coordinating the public campaign and challenge, which begins with a letter confronting the museum with its fraudulent gas chamber door, addressed to the director of the Museum, Dr. Walter Reich, and referencing Crowell’s full, breakthrough articles published on CODOHWeb.

Smith was one of the first revisionists to take a public stand against the infamous enshrinement of the false and malicious Holocaust story in an officially sanctioned, taxpayer-supported museum in the midst of monuments and memorials to America’s greatest men and noblest ideals. Shortly after the U.S. Holocaust Memorial Museum opened in 1993, Smith toured it with German-American revisionist Hans Schmidt (see SR 15-16, Summer 1993). Then, in the academic years 1993/1994 and 1994/1995, his ads challenging the Museum to exhibit proof that the Germans used gassing chambers for mass murder during World War II, or proof that even one person was killed in such an instrument, began appearing in college newspapers across America. Eventually the ad ran at more than half a hundred, including Notre Dame, Brandeis, Georgetown, U. Miami, Stanford, Boston College, U. Maryland, Penn State, Hofstra and U. Michigan. In December 1993, Smith and Jewish revisionist filmmaker David Cole [David Cole Interviews Dr. Franciszek Piper] appeared on the Phil Donahue Show, where they roundly thrashed a bevy of survivors (who were peddling the discredited Nazi human-soap lie) and philosophy professor Michael Shermer, who ruefully acknowledges his defeat in his recent, widely reviewed book Why People Believe in Weird Things. As Shermer relates in his book, Smith told a national television audience of millions.

CODOH’s first attempt to get the USHMM to exhibit real gas-chamber evidence—or else bring its accusations into line with demonstrable fact—created a fire-storm of media, but didn’t succeed in forcing the Museum’s hand Smith didn’t know it then, but a new revisionist scholar was about to set to work on the one piece of gas-chamber evidence the Museum does display—the replica of the “gas chamber” door from Majdanek.

Samuel Crowell, an Ivy League-educated American with an interest in history and technology, as well as a passing familiarity with Holocaust revisionism, commenced a serious study of the gas chamber problem in 1996 (largely in response to the intensifying tempo of suppression of revisionism in Europe).

Starting with tire documents and evidence, largely on Auschwitz, as gathered and analyzed by French exterminationist J.C. Pressac, as well as with the revisionist classics. Crowell discovered a hitherto largely neglected aspect of the buildings, rooms, and fittings in question: many of them had either been adapted for or expressly manufactured for defense against air attack, including poison-gas attack. This was clear not merely from explicit references in blueprints and other documents, but from the still existing technical and commercial literature, which describes and advertises much of the hardware that Pressac and other exterminationists explain as evidence of mass murder by gas. (See SR 42 & 43.)

Because of space limitations, Smith's Report is not able to do justice to Samuel Crowell’s findings on the German air defense effort and its significance for the concentration camps and the subsequent Holocaust gassing myth. His two major articles on this matter to date—“Technique and Operation of the German Anti-Gas Shelters in World War II: A Refutation of J.C. Pressac’s 'Criminal Traces’” and “Defending against the Allied Bombing Campaign: Air Raid Shelters and Gas Protection in Germany, 1939-1945” are heavily documented, powerfully argued, and accompanied by numerous photographs. Both articles are published on CODOHWeb, CODOH’s site on the World Wide Web, and will soon be available from CODOH in printed form.

The Museum’s Replica of a “Gas Chamber” Door

Early this year Crowell discovered that a gas-tight door advertised and sold throughout wartime Germany as defense against poison gas attack (the same door advertisement was reproduced on p.8 of SR43) is identical, as Crowell has it, “in every conceivable physical feature,” to the door at Majdanek, a replica of which is exhibited at the USHMM as the door to a gas chamber.

Both are of the same dimensions and were originally equipped with U-shaped locking latches that could be operated from either inside or outside. Both have peepholes covered with perforated steel plates on the outside, a standard feature of air raid shelter doors (but proof, for exterminationists, that gleeful Germans peered in at their victims’ death throes). In fact, the doors at Majdanek have features the replica doesn’t show, including the sawed-off but still workable interior latches and a center door handle that makes it possible to open and close the Majdanek “gas chamber doors from the inside—for do-it-yourselfers, one supposes.

The door was not a door designed to kill; it was designed to save lives: the one piece of evidence on exhibit at the U.S. Holocaust Memorial Museum’s to substantiate the “gas chamber" claim is a hoax.

Samuel Crowell chose to come to CODOH with his findings. We are going to make the most effective use possible of his work Besides publishing the two articles mentioned above on CODOHWeb, we have opened a page there that addresses the Museum’s gas chamber hoax directly, exhibiting the Majdanek door and the air shelter door ad side by side and putting the question, “Why the Deception?” This page also offers full-text versions of pamphlets critical of the Museum by Robert Faurisson, Ted O’Keefe and Bradley Smith.

Crowell, associating himself with CODOH, has written a letter to Walter Reich, director of the USHMM, asking three very simple questions about its gas-chamber-door replica (you’ll find Crowell’s letter boxed on the following page). Dr. Reich is going to have to consult with a few of his Museum experts on this one. He knows full well what CODOH is, and the media we can get. His experts are going to sweat over this one. When Dr. Reich realizes his experts are sweating, he’s going to perspire a little himself. We’ve got them on this one.

Nevertheless, our past experience with the Museum tells us that we should not expect a serious response to Crowell’s questions, that it will all be hushed up among tire Museum insiders, so we are going to take this story—now—to the print press and other media, both on and off campus, with press releases, op-ed pieces, and a variation in our ad for student newspapers which will focus on this particular bit of key Museum fraud.

And that is not the end of it—by far. Crowell and other experts in association with CODOH are unearthing, have already unearthed, other damning evidence of fraud in the exhibits at the Museum. We will roll out this evidence month after month, presenting each piece of the story thoroughly to the media. We have very provocative materials, we’re having a lot of fun digging them up, and before we’re through a lot of people are going to realize we’re right, they’re wrong. The consequences for the gassing lie—and the Museum—could be momentous.

The U.S. Holocaust Memorial Museum stands at the nexus of American public policy and Holocaustomania; its replica of a Majdanek gas chamber door is specific, symbolic, and—for us revisionists—supremely ironic. We’re going to do everything possible to see to it that the Museum is strung up from its own door, a door that was built and installed, not to kill people, but to save them—Jews and Germans alike—from Allied bombers.

Samuel Crowell’s letter to the director of the USHMM