From its inception, the U.S. Holocaust Memorial Museum has been a target for Bradley Smith and CODOH. And even before it opened in 1993, the Museum’s spokespersons and allies were boosting the USHMM as the cure for Holocaust revisionism—and CODOH’s Campus Project.

In May, 1992 the newsletter of the future USHMM quoted Professor Deborah Lipstadt on the need for such a museum to combat Holocaust revisionism. The professor was particularly concerned about the activities of one revisionist: “In recent months, a lone denier, Bradley Smith, has garnered incredible amounts of attention with a tactically brilliant but devious maneuver: the placing of advertisements in student newspapers arguing there was no Holocaust.”

When the USHMM opened in April, 1993—its commitment to historical truth underlined in speeches by such celebrated truth tellers as Elie Wiesel and Bill Clinton—Smith took up the USHMM’s challenge to revisionism. In Smith’s Report, he launched a [???]

In America, the charge of “genocide” the Lobby has leveled against the German people is going to stand or fall on the evidence displayed in this one building. It will either demonstrate the existence of homicidal gas chambers at Auschwitz or it won’t. My position is: no gas chambers, no “Holocaust.” If the museum fails in this one task, the USHMM will come to be seen as a 100-million dollar monument to fraud (SR 14, March/April 1993).

Soon afterward, in May, 1993, Smith visited the Museum for himself. As he wrote in the subsequent Smith's Report, the three pertinent items on display at the permanent exhibition—an alleged model of an Auschwitz crematorium showing a mass gassing; a casting of an airtight door, supposedly to a gas chamber at Majdanek; and several aerial photographs of Auschwitz with postwar captions indicating alleged gas chambers—seemed to provide no credible evidence, let alone proof, of homicidal gas chambers. Smith’s attempts at that time to question the director and the official historian of the USHMM’s permanent exhibit on the museum’s evidence for the homicidal gas chambers resulted only in this dismissal by Dr. David Luebke, the historian: “I trust that you have already had an opportunity to view the permanent exhibition and that it is no longer necessary for me to describe what you have seen for yourself.”

When Smith agreed to a radio debate with Georgetown professor Michael Berenbaum, who was heavily involved in designing the Museum’s permanent exhibit, Berenbaum changed his mind after several exchanges with Smith on the air, haughtily informing the host: “I make it a practice not to talk to deniers.” (Loath to leave the media entirely, however, Berenbaum now heads Steven Spielberg’s Survivors of the Shoah Visual History Foundation.)

Such arrogance, and the welcome input of such revisionist scholars as Robert Faurisson, inspired the Campus Project ad “A Revisionist Challenge to the U.S. Holocaust Memorial Museum.” 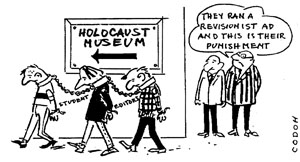 Crime and Punishment at the Georgetown Voice

Like its numerous counterparts in past and present Communist regimes, the U.S. Holocaust Memorial Museum is an atrocity museum—and atrocity museums exist for purposes of propaganda and forcible “reeducation” of dissenters. Thus, after the Georgetown U. Voice ran CODOH’s ad challenging the U.S. Holocaust Memorial Museum on October 14, 1993, the university’s media board issued a public apology, gave the $200 CODOH paid to place the ad to the Museum, and sent three of the Voice’s student editors on a mandatory tour of the USHMM. Five years later, the editors of Indiana University South Bend’s Preface were made to take a similar, compulsory visit to the Museum. The cartoon above ran in the December 1993 issue of SR.

Forcefully addressing the absence of hard evidence for homicidal gassing, the ad urged collegians to “Call the Museum! Find Out for Yourself!,” and it listed the Museum’s telephone number.

Three years ago CODOH founded its site on the WorldWideWeb (www.codoh.com), and recruited volunteer associates who manage the site and carry out scholarly research. Thus CODOH has been able to publish, in Smith’s Report and on CODOHWeb, original research that casts further doubt on specific historical claims advanced by the USHMM.

In September 1997, SR published Samuel Crowell’s finding that the casting of an airtight door from Majdanek on exhibit at the Museum (and labeled a “gas chamber” door) is in fact indistinguishable from doors manufactured, advertised, and widely sold in wartime Germany for air defense. This “door problem” quickly inspired a campus ad directing readers to CODOHWeb. Noting that the ad took up only two column inches to call attention to the immense archive of revisionist materials on CODOHWeb, the ADL dubbed it “Smith’s ‘stealth’ ad.”

In the following issue, SR broke the story that Hadassah Rosensaft, a member of the committee that determined which items would constitute the Museum’s permanent exhibit, had testified at the British-run Belsen Trial in 1945 that four million persons had been cremated at Auschwitz and that she had seen pipes for introducing Zyklon B into the alleged gas chambers—two eyewitness claims which somehow failed to make it into the USHMM’s exhibition. Perhaps Berenbaum and his friends in Hollywood can do justice to these recently neglected accusations... But we rather think that, especially after our tabloid begins hitting home, the U.S. Holocaust Museum and its friends will begin to get a lot more careful with their charges.