January 23, 1994, marked the ninety-seventh birthday of India’s dynamic nationalist leader, Subhas Chandra Bose. In the modern history of the world’s second most populous country, only Mohandas Gandhi and Jawarlhal Nehru have made an equal or greater contribution to India’s independence movement.

In terms of his courageous determination and the broad scope of his effort, probably no one did more to free India from British colonial bondage than Bose, who was affectionately known by his followers as Netaji (Hindi: “respected leader”). In his effort to deliver self-rule to India through armed struggle, Bose risked everything during the Second World War by forming a political and military alliance with the Axis powers.

In this carefully researched and well documented 807-page biography, Leonard Gordon, a professor of history at Brooklyn College, examines the lives of Subhas Chandra Bose and his elder brother, Sarat Bose. While not as charismatic or as well-known as his younger brother, Sarat nevertheless played an important role in the Indian nationalist movement. He worked for his country’s freedom mainly as a skilled parliamentarian and a lawyer in his native Bengal state. While Subhas Chandra Bose was active outside of the homeland, Sarat was his brother’s chief supporter and defender in India.

This book’s first two chapters trace the Bose family history, and detail the educational and career training of the Bose brothers. In the third chapter Gordon introduces the political setting in which the brothers would work and make their mark. Subhas emerged as an outspoken political activist whose participation in Gandhi’s “non-cooperation movement” resulted in his first jail sentence, in 1921. Gordon shows how this jail experience made Subhas Bose even more dedicated and uncompromising in his work. Gordon traces his evolution from a supporter of nonviolent agitation to a champion of armed struggle in pursuit of Indian independence. Sarat, by contrast, remained committed to legislative action, although he defended his younger brother’s course.

Beginning with chapter seven and continuing through the rest of the book, Gordon tells the reader about the Indian national struggle. During the years 1932–1936, Subhas Bose visited several European countries, pleading India’s case in meetings with leaders of all shades of political opinion, from fascist to communist. Gordon documents Bose’s meetings and friendships with leading Europeans such as Eamon de Valera of Ireland, Benito Mussolini of Italy, and Dr. Eduard Benes of Czechoslovakia. It was National Socialist Germany, though, that most profoundly impressed Bose.

Although not in agreement with Hitler’s racist views, he admired the Third Reich’s discipline and nationalism. Bose was highly skeptical of the Nazi goal of European military supremacy, Gordon explains, but he saw German might as a potentially useful tool that could serve the interests of his beloved homeland by breaking the power of British imperialism.

While Subhas Bose continued to argue India’s case from abroad, Sarat remained at home, acting as a soft-spoken pragmatist who fought for freedom through the legal system of British India. Sarat saw merit in Gandhi’s civil disobedience strategy, and even though he identified with his brother’s efforts, he never openly called for liberation by violent means. Nevertheless, Sarat defended militant nationalists and secured financial assistance for those labeled “terrorists” by the British authorities. Sarat’s arrest by the British because of his younger brother’s revolutionary activities did nothing to lessen his nationalist ardor. The brothers maintained a close attachment, and served as mutual mentors.

Chapters 10 and 11 deal with the story of Subhas Bose’s wartime collaboration with Germany and Japan. These chapters splendidly document the role of the Axis powers in providing aid and comfort to Asian nationalists during the Second World War.

Encouraged by German military successes, and the humiliations inflicted on Britain by the Wehrmacht, Subhas Bose pinned great hope on winning German support for the cause of India’s freedom. Gordon meticulously traces Bose’s relationship with the Nazi leadership, and his tireless work in Germany, 1941–1943. With encouragement and support from statesmen such as Joachim von Ribbentrop, Wilhelm Keppler, and Alexander Werth, Bose established the Azad Hind (“Free India”) center in Berlin. Over Azad Hind Radio, he broadcast eloquent and effective appeals from Europe to his countrymen in India, calling for resistance to British rule.

Many soldiers from the Indian subcontinent who had been serving with British forces in northern Africa and Europe were taken prisoner by the Germans. From among this group, Bose raised a small army of volunteers. The soldiers of the “Indian Legion,” wearing German uniforms with swastika and eagle, took an oath to Hitler and Bose “in the fight for the freedom of India.” Well trained by German officers, the Legion’s soldiers served with the Wehrmacht for the honor of India. Indo-German relations were excellent. [For more about this, see “Subhas Chandra Bose, the Indian National Army, and the War of India’s Liberation,” by Ranjan Borra, in The Journal of Historical Review, Winter 1982.]

After a dramatic submarine journey from Germany to Sumatra in early 1943, Bose shifted the center of his work to Asia, where – in collaboration with the Japanese – he could more directly carry on the struggle. As Gordon explains, Bose strongly admired and respected the Japanese, and was convinced that, as fellow Asians, they could provide better help in freeing the continent of Western domination. 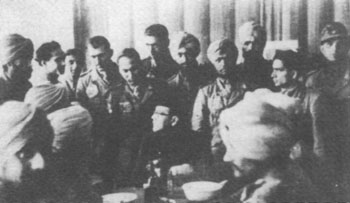 Bose with officers of the Indian Legion, Berlin, 1942

The military arm of Bose’s government in exile was the Indian National Army (INA). Its soldiers were recruited from among Indian troops captured by the Japanese who had been serving under British command, and from among the large Indian population living in Southeast Asia. Altogether about 40,000 joined the INA. Perhaps the most remarkable detachment was the all-women “Rani of Jhansi Regiment,” which eventually numbered about a thousand.

The INA faced its most important challenge in 1944 when, along with a large Japanese contingent, about 8,000 INA troops advanced from Burma into northeastern India. Although the combined INA-Japanese army was eventually turned back, it succeeded in establishing an identity as India’s army of liberation. For the first time ever, an army of Indian soldiers commanded by Indian officers fought on Indian soil and under the Indian flag for the freedom of their homeland – a fact that had a powerful psychological impact in India itself.

Gordon details the circumstances surrounding Bose’s death. On August 17, 1945, a Japanese plane carrying Bose and several colleagues succumbed to engine trouble and crashed shortly after takeoff from an airfield in Taiwan. According to Japanese military sources, Bose’s body was recovered with severe burns, and he died a short time later in a military hospital. The records of his death were apparently destroyed by Japanese military authorities, and Bose’s remains were secretly cremated. Because the precise circumstances of his death were not immediately or authoritatively clarified, for many years popular legends and myths about Bose circulated in India, including supposed sightings of him. For many in India, particularly in his native Bengal province, Bose has become a mythic figure, revered in the tradition of Hindu divinities.

While sharply rejecting Bose’s tactics, Mahatma Gandhi in early 1946 paid a fulsome tribute to “Netaji” and his struggle:

The hypnotism of the Indian National Army has cast its spell on us. Netaji’s name is one to conjure with. His patriotism is second to none. His bravery shines through all his actions. He aimed high but failed. Who has not failed? Ours is to aim high and to aim well … The lesson that Netaji and his army brings to us is one of self-sacrifice, unity irrespective of class and community, and discipline. If our adoration will be wise and discriminating, we will rigidly copy this trinity of virtues, but we will as rigidly abjure violence …

While Subhas was active outside India, the British authorities detained his brother Sarat under house arrest. Throughout this four-year period, Gordon relates, the brothers sent and received coded messages to each other through Indian intermediaries. The two brothers thus remained together in spirit throughout this turbulent period. After his release at the end of the war, Sarat Bose resumed his legal work.

By this time, the Indian masses regarded Subhas Chandra Bose and the former soldiers and officers of the Indian National Army as national heroes. Sarat Bose played an important role in rousing the political leadership of the Indian National Congress, particularly Gandhi and Nehru, to support the former soldiers and officers of the INA. Gordon supports the view that the example and legacy of Subhas Bose and the INA served to hasten the end of British rule in India (“the Raj”).

Independence finally came on August 15, 1947, but at the cost of partitioning the subcontinent into two states, India and Pakistan – something that both Subhas and Sarat, along with Gandhi and Nehru, had dreaded. Sarat lived to see the early years of independent India, carrying on the spirit and memory of his younger brother. (He died peacefully in 1950 in Calcutta.)

Gordon sums up (pp. 612, 618) the legacy and continuing appeal of these remarkable brothers:

For those to whom martial values are meaningful, Subhas Bose was the hero. He left India craftily, contacted foreign powers, helped raise funds and an army of Indians. He said that it was necessary to have martyrs in order to have freedom. Indians had to prove that they were worthy of freedom. He offered his own life. He braved bombs and bullets rather recklessly. He died a martyr’s death, retreating so that he could fight for freedom another day.

The Boses now live in the historical imagination of their countrymen. Bound by love and common cause, they struggled against imperialism with great perseverance and courage. They had their successes and failures as they worked for what they thought was the central political concern of India in the first half of the twentieth century: complete independence from the British Raj. They should be remembered for the zest and devotion they gave to their country as they tried to fulfill their own and India’s destiny.

Brothers Against the Raj is a thorough examination of the lives of two brothers who made significant contributions to the liberation of their country. With substantial notes and references, supplemented with numerous little-known photographs, this well-researched and documented book is unquestionably the most important English-language work on this chapter of history.

"In these days of fear and confusion, let us remember that the endless repetition of a lie or the multiplication of an empty promise does not make a truth. Truth is something more than the greatest common denominator of mass ignorance and greed. It is never determined or demonstrated by majorities or pluralities or popular error and appetite. Ultimately, with God's aid, it always emerges and finally prevails, supreme in its power over the destiny of mankind, and terrible in its retribution for those who deny, defy or betray it."
—Virgil Jordan