In spite of strong criticism from prominent American Jewish leaders, the President of Croatia refuses to repudiate his revisionist views on the Holocaust issue. Franjo Tudjman, Croatia’s democratically elected leader, and a respected European scholar, has aroused controversy for publicly rejecting the “Six Million” story.

At the invitation of the US government, Tudjman and other foreign leaders attended the formal ceremony on April 22 in Washington, DC, dedicating the US Holocaust Memorial Museum. Elie Wiesel, a Jewish survivor of Auschwitz and other German wartime camps, was not happy. “Tudjman’s presence in the midst of survivors is a disgrace,” said Wiesel, who also expressed concern that a 1988 book by the Croatian historian would, in the words of the New York Times (April 22), “fuel the arguments of historical revisionists who deny that the Holocaust occurred.”

Rabbi Marvin Hier, director of the Simon Wiesenthal Center in Los Angeles, said that the only justification for Tudjman’s appearance at the dedication ceremony would be to provide an opportunity for him to publicly repudiate his heretical views. “If that is not the case,” Hier said, “the invitation is giving credence to one of the world’s most famous Holocaust revisionists.” (New York Times, April 22, 1993.)

Tudjman readily acknowledges that Europe’s Jews suffered “terrible hardships” during the war years. At the same time, though, he has written in Bespuca – Povijesne Zbiljnosti (“Wastelands: Historical Truth”), a 500-page scholarly work first published in 1988:

The estimated loss of up to six million [Jewish] dead is founded too much on both emotional, biased testimonies and on exaggerated data in the postwar reckonings of war crimes and on the squaring of accounts with the defeated... In the mid-1980s, world Jewry still has the need to recall its “holocaust” even by trying to prevent the election of the former U.N. Secretary General Kurt Waldheim as president of Austria.

Tudjman reportedly estimates that a total of 900,000 Jews perished in the catastrophe of the Second World War. (New York Times, April 22.) He also suggests that many wartime Jewish deaths would not have occurred if German armed forces had prevailed over the Soviet Union, allowing for a “territorial solution” to the Jewish question such as a “reservation” in eastern Poland or in Madagascar. (See The Journal of Historical Review, Summer 1992, pp. 240–243, and The New Republic, Nov. 25, 1991, pp. 16, 18.)

Tudjman reaffirmed his revisionist outlook in an interview with Canadian television: “With regard to Jews, I’m inclined to agree with those scholars in the world who say that the figure of six million is exaggerated.” (The New Republic, Jan. 20, 1992, p. 5.) 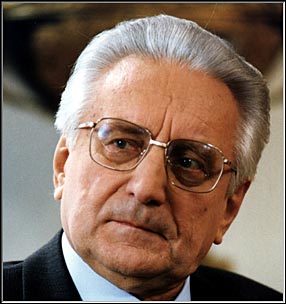 Tudjman’s views are all the more noteworthy because they are those of a respected historian who cannot seriously be regarded as a “Nazi.” During the Second World War he fought against Croatia’s pro-German Ustashe regime as an officer in the partisan forces of Communist leader Tito. After 1945, he served in Belgrade as a member of the General Staff of the Yugoslav National Army, eventually attaining the rank of Major General. In 1961 he left the military to pursue academic interests.

After study in Belgrade, he assumed a position in 1963 as a part-time professor on the Faculty of Political Science at the University of Zagreb, and in 1964 he earned a doctorate in history. From 1961 to 1967, he was director in Zagreb of the Institute for the History of the Workers Movement. He has also served as edi-tor-in-chief of the magazine Paths of the Revolution, and as a member of the editorial boards of the military-theoretical journal Voino delo and the intellectual magazine Forum.

Tudjman is the author of numerous historical works, several of which have appeared in other languages, and has been a guest lecturer at universities and institutes in Italy, Germany and the United States. In 1966 he was a speaker at the International Seminar series at Harvard University. His book Nationalism in Contemporary Europe was published in 1981 by the Columbia University Press, and his controversial 1988 book Bespuca (“Wastelands”) was given a respectful review by Germany’s prestigious national daily, the Frankfurter Allgemeine Zeitung, Jan. 16, 1990. Tudjman, the paper told readers, has dealt with questions of contemporary history “with competence and courage.”

Tudjman’s refusal to give in to demands that he repudiate his revisionist views on the Holocaust issue is entirely consistent with his record of defiance of biased “official” history. Because of his dissident views, Communist Yugoslav authorities ordered his arrest in 1972 and barred him from public activity for two years. After a second arrest in 1981 for dissident activities, he was imprisoned for a year and a half.

Following the breakup of the artificial Yugoslav state, Tudjman emerged as leader of the Croatian Democratic Union, his country’s major political party. After the victory of his party in the first democratic elections held in Croatia in more than 50 years, he was sworn in as president on May 30, 1990.

Few of those Americans who are so determined to “never forget” the wartime fate of Europe’s Jews know much about what happened to the continent’s other national and ethnic groups. For example, many tens of thousands of Croat, Slovene and Bosnian Muslim prisoners were summarily murdered at the end of the war by the partisan forces of Yugoslav Communist leader Tito (who was backed by the United States and Britain). In addition to combat personnel taken prisoner, the victims also included nurses, nuns and children.

Most historians have estimated that the partisans shot from 70,000 to 100,000 people without trial within weeks of the war’s end, although some believe that as many as 500,000 were summarily killed. Most of the victims were people who were trying to flee Tito’s Communist forces. The refugees were returned by British troops from detention camps in Austria, or were turned back at the border by British forces who occupied southern Austria and northeastern Italy. At one site near Sosice in Slovenia, for example, as many as 40,000 were systematically shot, and their bodies flung into caves. (See: New York Times, July 9, 1990.; Los Angeles Times, Nov. 4, 1990.; The New Republic, Dec. 24, 1990, pp. 16–19.)

Reflecting the historical revisionism that has been sweeping Eastern Europe and the lands of the former Soviet Union in recent years, a downtown street and an elementary school in Croatia’s capital city of Zagreb have recently been renamed in honor of Mile Budak, a noted author of several novels written before the Second World War. Most of Zagreb University’s main facilities are on the newly named street. The Simon Wiesenthal Center has protested the renaming because Budak was a ranking minister in the wartime Croatian republic (which was allied with Germany), and promulgated the law prohibiting Jewish participation in Croatian “institutions of social, sports and cultural life.”

While a few European countries have outlawed Holocaust Revisionism, in Croatia it enjoys support from the highest level. Indeed, Croatians are more free than Americans to express their views on this issue.