David has spent the best part of four years studying the physical evidence for the gassing chambers. That effort, together with a real need on the part of revisionists and mainstream historians as well, informed both his trips to Europe. Now he has worked out a series of questions (not assertions) about that physical evidence. 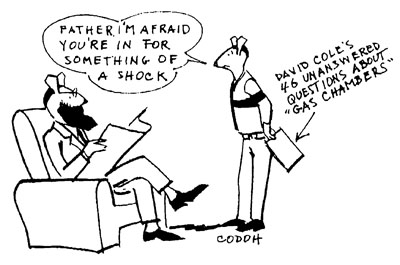 I'm going to publish David's 46 unanswered questions about the gas chambers as a booklet. I'm doing an introduction giving the background on how the questions were developed, how they influenced David's and my appearance on the Donahue television show in February last year.

Additionally, there is a postscript by David and the three addenda, which contain some of the surprising answers given by mainline historians Michael Berenbaum and Raul Hilberg and the big shots at the Holocaust Memorial Museum in Washington when they were presented with the questions by Occidental professor Michael Shermer. The text is focused on the physical evidence for the alleged gas chambers. There's no politics in it. It's written very simply, yet can be recommend to scholars as well as lay persons.

This isn't a text for the season. If we promote it energetically, it may well become one of a handful of texts that will have to be read first by any person who intends to take a serious look at what the physical evidence for the alleged gas chambers really demonstrates. If you believe you might want to contribute a substantial share of the $3,200 budget for developing, printing and promoting this absolutely unique booklet, I would be glad to send you a manuscript copy of the text for your examination.

Time is of the essence!

These 46 questions are online at http://codoh.com/library/document/987/