Soviet premier Nikita Khrushchev might have had David Irving in mind when he once warned that historians are dangerous because they have the power to upset everything. German Chancellor Otto von Bismarck once said that the main thing is not to write history, but to make it. Irving is a man who has been able to do some of both.

He is also living proof that the life of an historian need not be dull. The leftist British daily The Guardian once commented, “If one can overlook his outrageously odious views, Irving-like Hitler-can be a funny man. The humor comes from a hint of self-mockery and an obvious delight in making liberal flesh creep.”

At the Eleventh IHR Conference in October 1992 – as he had in his presentations at the IHR Conferences of 1983, 1989 and 1990 – this good friend of the Institute for Historical Review not only shed new light on important chapters of twentieth-century history, he delighted attendees with humorous updates on some of the new ways he had found to make liberal flesh creep.

In the three decades since he published his first book, Irving has firmly established himself as not only one of the most successful and widely-read historians of our time, but also as one of the most courageous.

He has an enviable track record of uncovering startling new facts about even supposedly well-known episodes of history. His effectiveness is due in very large measure to his discovery of original source materials, such as diaries, original documents, and so forth, from both official and private sources. He is tenacious in his ceaseless digging in just about every important historical archive in the western world.

A professional historian, Irving has little respect for taxpayer-financed scholars who are guilty of what he calls “inter-historian incest,” and who thereby help to keep alive dangerous myths and legends left over from wartime propaganda.

His first work, The Destruction of Dresden, was published in 1963 when he was 25 years old. Since then, he has published more than two dozen books, many of them best-sellers, including biographies of Hermann Goring, Winston Churchill, and Erwin Rommel. He is currently at work on a biography of Joseph Goebbels.

Several of Irving's books have appeared in various languages, and several have been serialized in prominent periodicals, including the Sunday Express, the Sunday Telegraph and Der Spiegel. Over the years, he has also contributed articles to some 60 British and foreign periodicals, including the Daily Telegraph and the Sunday Express in London , the Mainichi Shimbun in Tokyo, and Stern and Der Spiegel in Hamburg.

Irving's reputation first came under vicious attack following the publication in 1977 of Hitler's War, a monumental work that was hysterically criticized for its contention that Hitler did not order the extermination of Europe's Jews. The mass killings must have been carried out by Himmler and his cohorts behind Hitler's back, Irving concluded at that time.

As a journalist for Time magazine once told him, "Until Hitler's War you couldn't put a foot wrong, you were the darling of the media. After it, they heaped slime on you."

So enraged was the Zionist Anti-Defamation League of B'nai B'rith by this book that the shadowy organization promptly added his name to its ever-growing list of enemies. As it turned out, the ADL's troubles with Irving were only just beginning.

The international campaign against him became even more vicious following the publication in 1981 of Uprising, a history of the 1956 anti-Communist revolt in Hungary. This book enraged the ADL crowd because it does not whitewash the significant Jewish role in the Hungarian Communist regime.

Irving has made several highly successful speaking and promotion tours in Germany, Canada, Australia, South Africa, the United States, and other countries. German listeners in particular delight in hearing an Englishman say out loud what many in that country believe in their souls but have been intimidated into keeping to themselves. In Germany, Irving has become a kind of conscience for a people who have been largely robbed of their own.

A startling climax in the second “Holocaust Trial” of Ernst Zündel in 1988 was the testimony of Irving, who was the last of 23 defense witnesses. He stunned the completely packed Toronto courtroom by announcing that he had changed his mind about the Holocaust story. During his three days on the stand, he explained in detail why he now endorses the Revisionist view of the extermination story.

In June 1989, Irving published the British edition of The Leuchter Report. This handsome, illustrated edition, for which he wrote a foreword, was launched by him at a press conference in London. He told the journalists there that the infamous extermination gas chambers of Auschwitz and Majdanek did not exist, except, perhaps, as the brainchild invention of Britain's wartime propaganda bureau, the Political Warfare Executive (PWE).

A magnificent 860-page Focal Point edition of Hitler's War was published last year. Taking account of his most recent research and insights, references to so-called "extermination camps" have been removed from this revised edition. And in his introduction, Irving deftly tears apart one historical legend after another. This work – the product of decades of patient research and writing – has proven particularly enraging to the enemies of truth in history.

In addition to the usual lies, his adversaries have even turned to criminal burglary and arson in their fitful and frantic efforts to silence him.

Not long ago, an official of the American Jewish Committee, a certain Kenneth S. Stern, declare that Irving “never has been considered a serious historian.” (The Oregonian, Portland, Oct. 7, 1992).

That is simply a bald-faced lie. 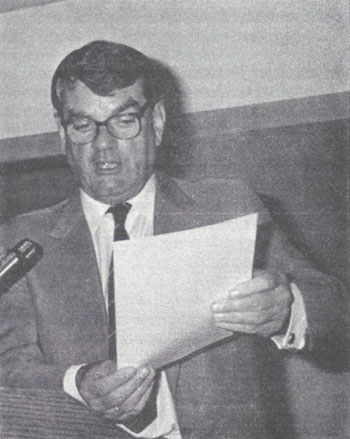 Irving refers to a document during his presentation at the 1990 IHR Conference in Washington, DC.

In fact, Irving's remarkable abilities have been acknowledged by some of the most prominent names in the field. British historian Hugh Trevor-Roper, writing in the Sunday Times of London, once declared, "No praise can be too high for Irving's indefatigable scholarly industry.” Trevor-Roper also called Irving one of the "few guides I would entirely trust … indefatigable in pursuit of evidence, fearless in face of it, sound in judgment…”

Another prominent British historian, A. J. P. Taylor, once wrote of him: "David Irving is a patient researcher of unrivalled industry and success.”

David John Cawdell Irving was born in Hutton, Essex, England, on March 24, 1938, the son of an illustrator and of a Royal Navy commander. His father and mother were both well-known writers. After a liberal arts education at the four-century-old Sir Anthony Browne's school in Brentwood, Essex, young Irving won a scholarship to study physics at the Imperial College of Science and Technology in London .

It did not take long, though, for him to realize that his life's calling would not be in the hard sciences.

In 1959 he moved to Germany's industrial Ruhr region to spend a year working in a steel mill to perfect his fluency in German. Then, after a stint working as a clerk-stenographer with the US Strategic Air Command at an airbase near Madrid, he returned to England to study political economy at London's University College.

Irving speaks fluent German, very good Spanish, and quite passable French, and reads several other languages. On a personal note, he is the father of four daughters. His hobbies are oil painting, travel, and cinematography, and his favorite song is the English naval hymn, "For Those in Peril on the Sea."

He lives in the Mayfair district of London's West End, although in recent years has spent quite a lot of time at a south Florida retreat, where he now prefers to do his serious writing.

You'd need a pickup truck to carry away all the newspaper and magazine clippings that have appeared over the years about Irving.

In January 1992, for example, a flurry of reports appeared in newspapers and television broadcasts around the world suggesting that he had abandoned his highly skeptical view of the Holocaust extermination story because of what he had found in the postwar "memoir" of Adolf Eichmann, the German SS officer who coordinated the wartime deportations of Jews.

Had Irving defected from the Revisionist camp? In the wake of this uproar, he told the IHR: "My position remains unchanged." There were "certain My-Lai-type atrocities" by German troops in the occupied Soviet territories, but the "gas chambers and factories of death are legend," and there is no wartime evidence of an order by Hitler to exterminate the Jews. In an interview at the time with the London Jewish Chronicle (January 17, 1992), Irving said, "The Jews are very foolish not to abandon the gas chamber theory while they still have time."

Last May, a German court fined Irving 10,000 marks – about $6,000 – for public statements he had made challenging the Holocaust story. His crime? At a meeting in Munich in 1990, Irving had said that the building in the Auschwitz main camp that has been portrayed for years as an extermination gas chamber is a phony reconstruction (or, in German, “Attrappen”).

The Munich district court refused to permit the defense to present even a single witness or exhibit. For example, it would not permit Irving's attorneys to call as a witness the director of the Auschwitz State Museum,  Dr. Franciszek Piper, who has privately confirmed on several occasions that what Irving had told the meeting in 1990 is, in fact, the truth. After his attorneys dramatically walked out of courtroom to protest the judge's outrageous rulings, Irving delivered a stirring plea for truth and justice that has since been widely circulated in Germany on audio cassette and as a leaflet. (For more on this trial, see the July-August 1992 IHR Newsletter.)

International and British Jewish organizations lost no time in attacking the paper for employing Irving, and the resulting furor made headlines in newspapers and magazines around the world. A report in the London Jewish Chronicle headlined "Sunday Times comes under pressure" (July 17, 1992), described the extent of the campaign to punish the paper for its collaboration with Irving. Officials of the American Jewish Committee added their voices to the worldwide pressure campaign, expressing particular anger because the historian has addressed several IHR conferences. The Sunday Times capitulated, and in breach of contract, refused to pay Irving the agreed-upon fee of 83,000 pounds. He is suing.

On July 3, more than 300 Jewish demonstrators gathered outside Irving's London residence to denounce him. The next day, July fourth (by the way, the ninth anniversary of the devastating 1984 arson attack against the IHR office-warehouse), a larger crowd of several hundred met at the same place to shout more insults. Among the banners carried by the crowd of Marxists, Jews, homosexuals and Rastafarians were placards reading "Return to the Road of Lenin and Trotsky!," and "Build a Bolshevik Party, Tribune of All the Oppressed!"

That same day, though, about 250 persons defied intimidation and threats to hear and cheer Irving and other speakers at a Revisionist seminar in London. Besides Irving, the audience heard addresses by Kirk Lyons, Leuchter's US attorney, and Georgia attorney Sam Dickson (who addressed the 1986 IHR conference).

In all this, it is gratifying to note that it is a Revisionist historian who was – once again – at the forefront of historical discovery. In spite of the well-organized international campaign to boycott and silence him, David Irving remains at the vanguard of his profession – and, by the way, solely on the basis of his indisputable knowledge, skill and industry.

It is also gratifying to realize that, as a result of each of these recent controversies, hundreds of thousands – if not millions – of newspaper and magazine readers around the world are now aware that a historian of recognized international stature rejects critical aspects of the orthodox Holocaust extermination story.