British historian David Irving was sentenced to three years in prison after admitting that he had denied the Holocaust, a crime in Austria. Irving pleaded guilty during the one-day trial.

According to reports from Austria Irving stated, "I made a mistake when I said there were no gas chambers at Auschwitz." Irving also said "I've never been a Holocaust denier, and I get very angry when I'm called a Holocaust denier." 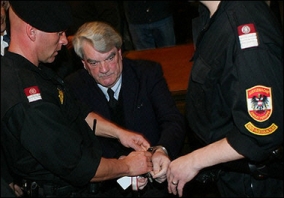 Irving's attorney, Elmar Kresbach said that he would appeal the sentence, "I consider the verdict a little too stringent. I would say its a bit of a message trial."

The State prosecutor, Michael Klackl declined to comment on the verdict.

Irving has been in custody since he was arrested in November on charges stemming from two speeches that he gave in Austria in 1989 in which he was accused of Holocaust "denial."

The court convicted Irving after his guilty plea under the 1992 law which applies to "whoever denies, grossly plays down, approves or tries to excuse the National Socialist genocide or other National Socialist crimes against humanity in a print publication, in broadcast, or other media."