Acknowledgment: I wish to thank David Irving for a prompt and thorough response to my request that he review a draft of this article for accuracy. He pointed out several areas of misstatement or neglected points, and this permitted considerable improvement to the article. An identical request made at the same time to Dr. Lipstadt remains unanswered at press time.

A movie (Denial) came out September 30 that represents a 2000 trial in London in which not-Holocaust-revisionist David Irving sued author and subsidized “professor” Deborah Lipstadt for writing in her 1993 book Denying History that David Irving was a “Holocaust denier.” The book, having been published in the United Kingdom, became subject to British libel law, which imposes upon the author and publisher of the book the duty of proving the truth of their statements as regards any person suing them for libel—that is, the promulgation of false information concerning the libeled party.

If Irving could in any way be called a mercenary, then he was a mercenary to the reading public: his writings to 2001 had gained him great fame and following on matters having to do with World War II and Britain’s role in it as it pertained to Germany, a country in which the young (British) Irving had spent a good deal of his time, the while learning the language of the people who lived there.

Lipstadt, on the other hand, had earned masters and Ph.D. degrees in religion at Brandeis1 University and subsequently, at the University of California at Los Angeles, had been denied tenure. So she (or the Dorot Foundation that funds her chair) moved her situs to Emory University in Atlanta, Georgia, whose eminent domicile she has ever-since claimed, and which has ever-since cloaked her partisan agenda under the mantle of “professor.” That she is on the faculty of the Religion Department rather than of the History Department has evidently not impaired her image as a historian in the slightest.

All this may or may not be seen as having influenced the Queen’s Court in the adjudication of this case. But of course, Britain’s own governmental apparatus might be seen, by the jaundiced among us, as decisively influenced by Jewish interests, then as now. 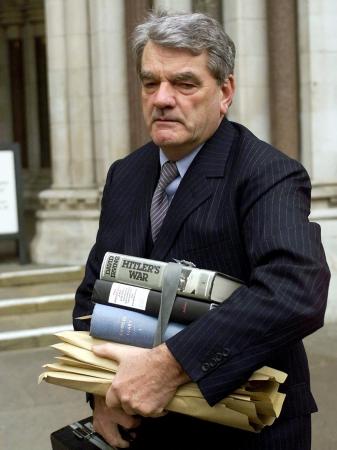 The defense hired phalanxes of eminent and would-be-eminent scholars onto its team, which ultimately encompassed dozens of ambitious “scholars” eager to get on the bandwagon heading toward victory. By the end, they ran up a bill of some $13 million in (no-doubt-generous) payments to this mercenary army.

Why, and how, would the defense have done such a thing? Did they really think the matter at hand was worth such an expenditure? Were they indeed willing to devote such sums to the Defense of History? Well, it certainly made Penguin look good, at least to a certain lobby, and … it subjected Irving (remember David Irving, the plaintiff?) to an enormous risk: the risk that under English law, if the verdict should go against him, Irving, the plaintiff, must pay the costs that Penguin and Lipstadt (remember Lipstadt, the defendant?) incurred in the course of their defense.

Irving, Brit that he is, had sought to exploit peculiarities of English law against his defamer that weren’t available to libellees in the United States, where Lipstadt’s book had first been published. But it had, indeed, been published in the UK as well, and that gave him his opportunity. Under English law, an accused defamer must prove the truth of his defamation in order to defend against a libel suit. English law, ironically, turned out to be Irving’s undoing. It was another characteristic of this body of law, known worldwide as “the English Rule,” that enabled the defense side to turn a shield into a devastating sword. This, precisely, was the rule that the loser in the action (Irving) had to reimburse the winner’s (Lipstadt’s) costs in defending the action.

The (financial) damages Irving sought were paltry indeed compared to the financial holocaust that ensued from his juridical initiative: a mere £500, to be donated to a fund in memory of his late daughter, Josephine. This was tempting for the co-defendant, Penguin Books, who was, after all, running a business rather than pursuing a cause, and they wanted to settle with Irving. But Lipstadt, Holocaust Warrior that she is, would have none of this, and threatened to sue Penguin if they entered into any such settlement of the suit. Maybe Penguin didn’t quite appreciate the influence Lipstadt and her tribe exerted over the English judiciary. That is, after all, a Top Secret. Either way, it worked out well so far as the verdict was concerned, and the liability for the costs, too, but it would appear Penguin was left holding the bag for five digits of US dollars, all for Dr. Lipstadt’s cause. Maybe her Dorot bankrollers picked up some of this tab—strange and wonderful are the flows of money that fund Zionist causes, and we hoi poloi shall never uncover the mysteries thereof.

The English Rule, of course, is meant to discourage frivolous, or vindictive, actions at equity. But the Lipstadt/Penguin team, somehow (“the fix is in”?) figured that their expenditures on “defense,” even if not ultimately collectible, could so financially cripple Irving that neither he nor any other soldier who might take his place in the ranks of Holocaust dissenters would dare to complain, in any forum of “justice,” about anything said of him or her by the other side. Penguin, of course, faced this very same stacked System of justice in the action threatened against them by Lipstadt.

It worked. The Court ruled against Irving and assigned to him the burden of paying Lipstadt/Penguin (or should it be, Penguin/Lipstadt?) the $13 million they had expended on defending their case. Suffice it to say, no title of Deborah Lipstadt’s today in print bears the imprint of Penguin Books; they’ve lost quite enough already in their forays with Dr. Lipstadt. Perhaps they wish to return to publishing, leaving aggressive lawfare to other entrepreneurs.

The message is clear for all to behold: don’t tangle with those (and we all know who they are) who command the heights of the System. Not only will you be thoroughly smacked down, you will be eternally ruined in your professional and financial life. David Irving joins the ranks of martyrs that today encompass many names known to those who have plumbed the mendacious depths of what passes for Holocaust Knowledge, including Norman Finkelstein2 (author of the magisterial The Holocaust Industry), Nicholas Kollerstrom (historian of science who dared to interpret the findings of chemist Germar Rudolf regarding cyanide traces in the walls of concentration camps), Jean Plantin, Robert Faurisson, Joel Hayward, Ernst Zündel, Horst Mahler, Sylvia Stolz, Ursula Haverbeck, Eric Hunt, Siegfried Verbeke, Germar Rudolf himself, Roger Garaudy, Paul Rassinier, Wilhelm Stäglich—the names go on and on, my own (real) name down around the bottom of the list.

David Irving knows well who rules us, through the System that rules us. The rest of us might take the lesson he learned so hard, to heart. It will cost us far less than it has cost him—unless, of course, in an unguarded moment of resisting it, we might expose ourselves to a fate such as he has suffered.

And if we any of us does, we shall have whatever consolation is to be had from joining the list above of true martyrs to justice and truth. May our blood melt their swords to rust.