This April, a tragic plane crash took the lives of Poland’s president, Lech Kaczyński and 95 others. The plane was taking them to Katyn Forest where the dignitaries were planning to commemorate the 70th anniversary of a war-time atrocity in which approximately 22,000 Polish Prisoners of War were shot and buried in secret mass graves.

The recent tragedy is an important reminder not only of the horrors of ‘total war’ but also of the falsifications and propaganda utilized during the Second World War. While World War Two holds a fascination for a significant portion of the population, with dozens of books and movies produced on the subject each year, the question of World War Two revisionism is still a touchy one. Why would anyone question what appears to be the clearest example of good and evil in modern history? How could the actions of the “greatest generation” be called into question? What ulterior motives must one have to dare to doubt the official history as pronounced by the victors?

While the Katyn Forest Massacre was only one episode in a war which ultimately claimed tens of millions of lives, much can be learned by reconsidering it and the cover-up that followed.

The Soviet invasion of Poland began on September 17, 1939 just 16 days after the German invasion from the West. The Red Army encountered minimal resistance as the Polish Army was already overwhelmed attempting to hold off the Nazi advance from the opposite direction. In fact, many Polish units surrendered to the Red Army with no resistance. The units that did resist were quickly overcome. With much of the Polish Army in flight from the West some 227,000 men ended up in Soviet captivity.

On June 22, 1941 the Nazis invaded the USSR, including the Polish territory it took in 1939. The Soviets quickly released the Polish soldiers they held in captivity to form a new Polish army that would fight the Nazis under Soviet command. As the former POWs gathered, it quickly became apparent that their former officers were missing. Polish authorities began to officially inquire into the whereabouts of their missing officers.

The Polish Ambassador was given assurances by Molotov and Stalin himself that a search was underway for the missing officers (estimated at 15,000 at the time). On December 1, 1941, Polish authorities sent General Sikorski to Moscow with a list of the names of many of the missing. Stalin, who met with Sikorski, suggested that the missing men may in fact have escaped to Manchuria. He further declared that a search for the missing thousands would be extended to the Arctic Circle.

The Wehrmacht War Crimes Bureau, a Nazi bureau which was established for the purpose of investigating War Crimes had begun to hear reports of a mass execution of Polish officers by the Soviets by the Summer of 1941. In February 1943 the German occupation authorities began to search the area around Katyn Forest. On April 12th, the Germans announced that a horrible atrocity had occurred. By June of 1943 the searchers had unearthed 4,143 bodies. Each body showed that they had been executed with a bullet in the neck at the base of the skull. 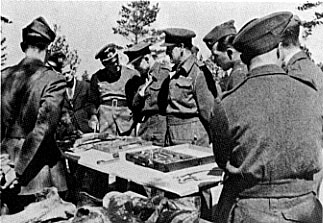 The Germans organized a team of medical and legal experts from twelve neutral countries to visit Katyn and report on their findings. The evidence became clear that the Soviet NKVD had exterminated the missing Polish officers.

But the story did not end here. The Soviets now announced that the prison camp in which they had held the officers (no need for an Arctic exploration!) had in fact been overrun by Nazi forces in July of 1941. The tale continued that it was in fact the Nazis who executed the officers with the purpose of falsely accusing the Soviets.

The Soviets continued their cover-up by refusing to allow the International Red Cross to investigate the matter. With the war in progress, the story largely passed to the back pages with many believing the charge against our Allies, the Soviets, was simply a bit of the propaganda of Joseph Goebbels.

The matter was not over however. At the conclusion of the war the victorious Allies put the Nazi Leadership on trial in Nuremberg. While ostensibly a trial by an “International Military Tribunal,” the victors did not have to answer for atrocities that would certainly have resulted in death sentences had they been committed by the vanquished Nazi leadership. After the initial indictment was signed by the Nuremberg prosecutors, including a charge that the Nazis murdered 945 Polish officers in Katyn, near Smolensk, the Soviets demanded that the indictment be rewritten. The passage should in fact charge the Nazis with the murder of 11,000 Polish officers at Katyn. The Soviets charged that the Nazis had perpetrated the crime and had increased the number originally suggested by 1000 per cent.

The Nuremberg Tribunal assigned to the Soviets the task of introducing all the evidence of German atrocities in Eastern Europe. With regard to Katyn the Soviets introduced “testimony” which consisted of "written statements" said to have been signed by "eyewitnesses.” These testimonies were in fact only "quoted" in a "report" and read aloud by the Soviet prosecutor. The original documents were never attached to the report. A so-called "forensic report" was also introduced into evidence. It was the only forensic report introduced into evidence at Nuremberg.

To the credit of the International Military Tribunal, the Katyn indictment did not appear in the final verdicts at Nuremberg. The United States Congress decided to investigate the matter in 1951 and 1952 and found that the Soviets were indeed the perpetrators. Still, the matter of the Katyn Massacre was unclear for many. Revisionist scholar F.J.P. Veale published his analysis of the crime in 1958.

It was not until 1989 that Soviet scholars admitted that Stalin himself had ordered the massacre. In 1990, Mikhail Gorbachev admitted the execution had been carried out by the NKVD and confirmed the existence of two additional burial sites at Mednoye and Piatykhatky.

Despite these high-level admissions it is not unusual to still see charges leveled against the Nazis for this atrocity. Several Russian politicians and commentators continue to support the Soviet tale that the Poles were executed by the Germans.

Others even in the English-speaking world suggest that the Nazis somehow coordinated the effort with the Soviets or otherwise allowed the Soviets to carry out the murders. In 2007 and 2008 Russian newspapers published stories implicating the Nazis for the crime.

By late April 2010 in the aftermath of the latest tragedy in Katyn, the Russians released for the first time documents which prove that the NKVD executed 22,000 Polish officers and other prominent citizens on Stalin’s orders. Moscow continues however to refuse to publish other important documents regarding this event.

The Katyn Forest tragedy of 1940 reveals among other things that history is not black and white. An Allied power committed a thoroughly documented crime against unarmed POWs. They also produced falsified witness testimony and a phony “forensic report” to cover up their crime and utilized the power and authority of the tribunal at Nuremberg to hammer home their falsified version of the truth. One is forced to consider what else may have falsified by the Soviets at Nuremberg and elsewhere. There can be little doubt that revelations regarding such matters remain quite inconvenient to those in positions of power.