Debating the Holocaust: A New Look at Both Sides 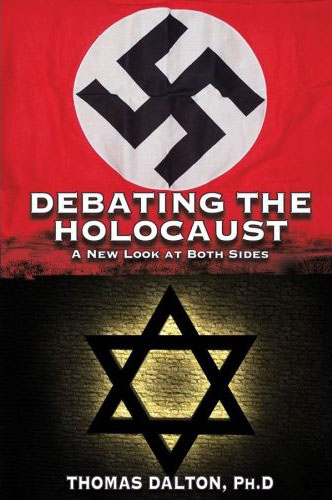 Thomas Dalton's Debating the Holcoaust.
Cover photo published with permission from the author.

As we all know, Holocaust books tend to be pretty boring. Graphs, charts, numbers, rambling footnotes—when thrown together, page after page, the literature can be exhausting. Whereas most histories are driven by their narratives, by their tales of life, Holocaust scholarship follows a different path. Because reputable Holocaust histories can't really frame a coherent narrative out of such a mysterious and strangely undocumented event, Holocaust historiography constitutes a unique genre within contemporary history. Of course, Holocaust fans can also get their kicks by reading tales like The Diary of Anne Frank or Elie Wiesel's latest blockbuster. But as we all know, these texts aren't exactly "history": they tell us very little about what really happened to the Jews in the Reich.

Because orthodox Holocaustiography masquerades as both history and hard science, it has to take itself very seriously. Believing its own myths about unique evil and unprecedented criminality, Holocaust historiography operates in an unironic, funereal atmosphere where alternative possibilities simply don't exist. Yet Holocaust revisionism, on the other hand, does something completely different. It is disputatious, dialogical, and aggressive. Without the traditional Holocaust narrative, it couldn't exist. Dissent is revisionism's raison d'etre. It is an exercise in intellectual commensalism; it latches onto the gills of mainstream Holocaust scholarship, where it passes basically unnoticed as its gnarly host devours everything in sight.

The key word here, of course, is unnoticed. If the Holocausters paid attention to their little revisionist fellow traveler, the Holocaust, like all other historical events, would then be open to legitimate historical debate. And that's the last thing establishment Holocaust historians want. So we're not fooled when Thomas Dalton swears that he is not a revisionist, that he's merely a neutral observer trying to objectively present a scholarly debate. As far as the true blue Holocausters are concerned, there is no debate. By simply positing that a dialog exists—and by refusing to subtitle his book with some overblown, sensational reference to "assassinated" or "assaulted" memory—Dalton is throwing in his lot with the dark side. He is, alas, one of us.

Nonetheless, Debating the Holocaust: A New Look at Both Sides is a new kind of revisionism. Because he is careful to appear nonpartisan, Dalton doesn't make any new discoveries or devise any new theories. What he does, however, is synthesize a wide range of mainstream and revisionist scholarship in an attempt to patch together the most important challenges that revisionism has posed to conventional Holocaust opinion. But because his work is a synthesis, he has to do more than recite the strongest work of Graf, Mattogno, Rudolf, and Faurisson (his favorite revisionists); he must also present the cases of Pressac, van Pelt, and Hilberg (his favorite Holocausters). Fortunately, Dalton knows both sides well, and so his text is especially valuable to non-experts who are interested in a straightforward presentation of how mainstream Holocaustiography measures up to its revisionist response.
Dalton begins by reminding us why the Holocaust is so important to re-vise. "Why not let the Jews have their ol' Holocaust?," he poses to himself rhetorically. After giving the obligatory reply that we have to dedicate ourselves to historical truth, he quickly proceeds to the good stuff. He describes why we can't just move on and forget about the Holocaust debate:

"We are not allowed to forget about it, even if we wanted to. Coverage of the Holocaust is standard fare in every school curriculum. Children the world over read The Diary of Anne Frank, Number the Stars, Waiting for Anya, Butterfly. Students learn about the gas chambers and the six million, about the Nazi atrocities. We watch Holocaust miniseries on television, Schindler's List, and Night and Fog. We celebrate 'Holocaust Education Week,' and we acknowledge January 27 each year as the 'International Day of Commemoration' of Holocaust victims, as declared by the UN in 2005. School children collect six million pencils, or six million paperclips. We visit Holocaust museums. We take college courses (for full credit) from endowed chairs in Holocaust studies. This is not by accident. It is a deliberate plan, to make sure we 'never forget.' And if we can never forget, then we should at least get the story straight."

Dalton gets it. Instead of repeating the orthodox garbage about "never forget" and "never again," he reminds us that, if we're going to canonize a historical event in state and popular culture, and if we're going to let this historical event dominate our foreign policy rhetoric and guide the actions of our empire, we better keep an open mind about what really happened. By reminding us of the ubiquity of the Holocaust in our lives—and in the lives of the other 6 billion people residing under the jurisdiction of the United Nations—Dalton points out that, despite his earlier claims about needing to set the record straight for mere historical truth, the Holocaust really needs to be revised because of the tyranny it imposes upon the world's publics. Because of the Holocaust campaign, the old protest refrain we hear so often is as true for us as it is for anyone: "We are all Palestinians now." We have all been thoroughly colonized by the Holocaust, and to decolonize, we must first revise. As Dalton himself points out, by indicting one of the central myths of the postwar liberal order, "Revisionists challenge not only orthodoxy; they challenge the power of the State."

After describing what's at stake in the debate, Dalton moves onto the basic complaints of the revisionists: the unreliability of the eye-witnesses, the dubiousness of the six million figure, the strange dematerialization of most of the death camps (along with their millions of victims), the impracticality of the murder weapons, the wartime photos' failure to corroborate the mainstream narrative, the lack of any explicit order from Hitler or the Nazi bureaucracy, and the preponderance of "survivors" who somehow managed to live through the omnipotent, satanic Nazi death machine. After reciting a thorough list of standard revisionist "concessions"—among them the regrettable and atrocious persecution of Europe's Jews, at least hundreds of thousands of whom died—Dalton debunks several "myths" about revisionism. He trashes the clichés that circulate about revisionists: that they are all neo-Nazis, for example, or that they all believe that the Holocaust was some sort of "hoax," the unfortunate vocabulary of which evokes images of tinfoil hats and Luftwaffe exoduses to the moon.

Dalton breaks down the six "death" camps one-by-one, presenting the traditionalist narrative before detailing revisionists' critiques. What we get are not dry, feeble regurgitations of revisionist research; instead we find well-analyzed summaries of the work conducted by contemporary revisionism's strongest researchers. Further, Dalton's information is up-to-date, as he relies much more upon Rudolf, Mattogno, and Graf than he does the groundbreaking work of Arthur Butz. The work's strongest feature, indeed, is its scope: never before has an author written such an accessible yet comprehensive and critical synthesis of revisionist and traditionalist sources.

That's not to say that the book doesn't make some pretty weird choices. The cover, to my utter confusion, is adorned with a giant Star of David and an even more giant Swastika, as if those are the two "sides" of the Holocaust debate. Since Dalton spends so much time emphasizing that revisionists are not just Nazis, and that traditionalists aren't just Zionist Jews, this is a most bizarre, dissonant flaw; and because these images are emblazoned on the book's front cover, they're difficult to sweep under the rug. But despite this minor yet conspicuous mistake, I think Debating the Holocaust is an important contribution to the current state of revisionist scholarship, and I can only hope that, in future editions (this successful book is already in its third printing), the book's menacing, misleading cover will be replaced by something more befitting its reasonable and inoffensive content.

In closing, I want to address why this book is so important and timely. To put it bluntly, we needed a valuable addition to the revisionist literature. With Germar Rudolf out of commission, book-length revisionism has lost its most energetic contributor. It is heartening to see Theses and Dissertations Press alive and well, and we should commend them for continuing to bring us the kind of vital scholarship that keeps historical revisionism dynamic and alive. Along with the recent appearance of Inconvenient History, I'm hopeful that Dalton's new volume signals a reawakening of serious revisionist work. After all, the book is a very potent effort at setting the record straight about revisionist claims, and it's done in such a reasonable, straightforward way that you could give the book to your mom without apology. It is the kind of book that resists drowning its reader in statistics, opting instead for a concise, memorable, camp-by-camp analysis of what Dalton calls "the great debate." In Debating the Holocaust, the revisionist community now has the closest thing yet to an encyclopedic handbook of revisionist arguments. This is the work's most remarkable achievement, and I hope it will only mark the very beginning of Thomas Dalton's promising new career in the fight for historical truth.