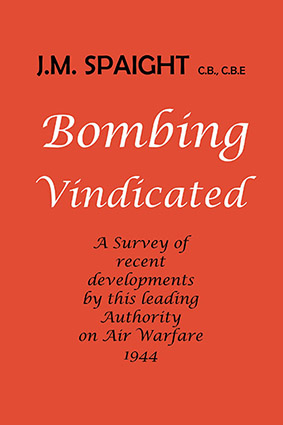 Ostara Publication’s edition of J.M Spaight’s hard-to-find Bombing Vindicated is an exact reproduction of the 1944 original – something which should thrill collectors and historians alike. Well-known and frequently cited in revisionist circles, Spaight’s thesis is anything but revisionist. In fact, Spaight’s book was written to counter mounting criticism of Britain’s program for mass-bombing of German cities. Spaight, a former Principal Secretary of the British Air Ministry, set out to justify the murder of German civilians through the British saturation-bombing campaign.

Spaight’s apologetic takes several forms. He begins by contrasting tactics and strategies of air power. Spaight asserts that in the run-up to World War II, Germany’s air force was designed in a way that was predominantly tactical while Britain’s was predominantly strategic. He goes on to explain that Germany’s air force was designed to support their army.

One of its weapons would be the aircraft, but it would only be a weapon of a Service which was predominantly the embodiment of German land power. The idea of air power as the rival or equal of land power was beyond the comprehension of soldiers steeped in the philosophy of war which commended itself to German mentality.

Spaight argues that the Germans never really understood the meaning of air power. He quotes Air Chief Marshal Sir Arthur Tedder, “They did not know how to use an air force properly.” From a statement from 9 January 1943, Tedder notes, “We have learned this new kind of warfare and the Americans are learning it. The Hun and the Jap have yet to learn it.” He continues, “Today, Britain alone of the embattled nations can look to a striking force in the air unshackled and untrammeled by parochialism and preconceived ideas, free from glib phrases like ‘air support’ and ‘fighter assistance’ – an Air Force which commands the air.”

While Spaight voices some degree of admiration for how well the German air force was fit to implement the air policy adopted by its military leaders, it is clear he considers such policy as shortsighted and even a weakness, a weakness that the wiser British leaders could exploit. He comments,

[The Luftwaffe] was an almost ideal arm for cooperation with ground forces. It contained a high proportion of dive-bombers (Junkers 87’s) and of transport aircraft (Junkers 52’s). Our own air force was weak in these two categories but was superior to the German in the quality (though not the quantity) of its long-range bombers and its single-seat fighters.

Our Wellington was a better heavy bomber than anything which Germany had, and we were definitely ahead of her in the fighter class. She has a fairly good interceptor in the Messerschmitt 109, but it was definitely inferior to our Hurricane or Spitfire. In other words, in the two categories which are of prime importance in the waging of air warfare, considered per se, we had the advantage, while Germany had it in those categories which are essential in air operations ancillary to those of ground forces.

By 1936 Britain was already planning for long-range bombers that could go farther than possible at the time and carry large cargoes of explosives. While Britain moved forward with their plans for heavy bombers, Hitler was expressing apprehension and concern on where such policies could lead. Already in May of 1935, Hitler warned, “War has been speeded up too much and made too overwhelmingly destructive for our geographical limitations. Within an hour – in some instances within forty minutes of the outbreak of hostilities – swift bombing machines would wreak ruin upon European capitals.”

Spaight recounts that Hitler’s National Socialists attempted both in 1935 and 1936 to restrict bombing of civilian centers and wanted such policy to be enacted as a far-reaching international agreement. He writes:

I can not subscribe to the view that Hitler brought it forward in 1935 and 1936 with his tongue in his cheek; not in the least because he was incapable of doing so, but simply because it was unquestionably in his interest to have such a restriction accepted. He was scared of the possible effect of a bombing offensive upon Germany’s war effort and the morale of the German population. He would infinitely have preferred to fight out the war in another way, a way that was not our way but was his way. He did not want our kind of war.

Spaight recounts a series of what must have been well-known events at the time. He writes of the first bombings of cities during the Second World War, and admits that bombing of Warsaw and Rotterdam was something entirely different than the bombing of London and later, the cities of Germany. Warsaw and Rotterdam were bombed in support of the German army and its tactic of blitzkrieg. The air bombardments were an operation of tactical offense. Spaight also acknowledges that while the Luftwaffe was the most powerful air force in the world that no air attacks fell upon Britain in the first ten months of the war. Likewise no aerial bombing of Paris occurred. Spaight notes “there was a mingled feeling of surprise and relief when no raids came.”

While there had been some minor incidents by both sides early in 1940 in which civilians were killed as result of bombings, there had been no policy of bombing civilian populations up until that time. Spaight applauds Britain’s decision to initiate the bombing of civilian centers. In fact he refers to it as “our great decision.” He writes,

Bomber Command went to war on 11 May, 1940. It had only been fooling with war until then. That is the great date in its war diary: not because of anything spectacular achieved immediately, but because of what was to follow in the fullness of time. In that decision of May, 1940, there was implicit the doom of Germany, though we little guessed it then.

From May through August of 1940, Britain carried out numerous raids on German towns. Up until the Hannover raid on 1 August 1940, the National Socialist press remained silent. Following that raid, German newspapers declared, “Britain loses her honor” and denounced the raid as “an appalling crime.”

In September 1940 Hitler retaliated against British bombing of German cities by bombing London. Hitler explained in a speech in Munich on 9 November 1940 his decision, “Mr. Churchill had bombs dropped on the German civil population. I waited in patience, thinking ‘The man is mad; for such action could only lead to Britain’s destruction,’ and I made my plan for peace. Now I am resolved to fight it out to the last.”

Addressing the National Socialist Party on 31 December 1940 Hitler again stated that the British bombed German cities for three and a half months before any reprisal action was taken. An infuriated Hitler now promised for every bomb dropped by the British, the Germans would drop 10 or if necessary even a hundred upon British cities.

Spaight offers what may be his best justification for the policy of bombing of civilian centers:

He [Hitler] most assuredly did not want the mutual bombing to go on. He had not wanted it ever to begin. He wanted it, having begun, to be called off. That, I am firmly convinced, was the aim behind his frantic bellowings and all his blather about attacks on the civil population. He knew that, in the end, our air offensive, if it did not win the war for us, would certainly prevent Germany from winning it.

Continuing his defense of “total war,” Spaight coins the term “battle-towns” to make the case that civilian centers involved in the support or manufacture of weapons or materials in support of a country’s military are indeed justified targets. He writes, “the making of arms is war-making. It cannot be called anything else. It is not noncombatant work.” But Spaight refuses to stop at the armaments industry. He adds,

transport workers, as well as all the civilians enrolled in the service of passive defence – the fire fighters, the fire-watchers, the rescue parties, the demolition squads – cannot be classed otherwise than as warriors in the new kind of war in which their work is as essential and, in principle, as warlike as that of the soldiers, sailors, and airmen.

Spaight concludes his case with a twist on the “war to end all wars” hype from World War I. He suggests that his beloved bombers could serve as the means to such an end. “The world will have been given convincing proof of its almost limitless capacity as a war-breaker before this war ends. It is the ideal weapon for smothering aggression.”

There can be little doubt that Britain’s policy of saturation bombing of civilian centers contributed to Germany’s defeat during the Second World War. The general public would likely embrace Spaight’s thesis. That same public has accepted the myth of warfare disguised as moral conflicts between “good” and “evil.” They have little concern about the means of defeating evil including the wholesale murder of innocents. Accordingly, veterans who flew missions against German cities and even those who dropped atomic bombs on Japanese cities are considered heroes. Public outrage is stirred only when such attacks occur against our civilians. In such cases, the perpetrators are deemed “terrorists.”

Bombing Vindicated is available from: http://ostarapublications.com/