Dissecting the Holocaust: The Growing Critique of "Truth" and "Memory" 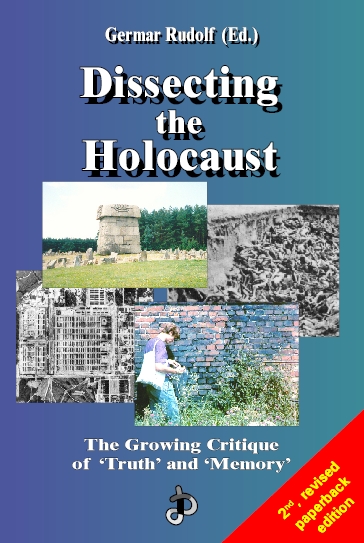 Dissecting the Holocaust: The Growing Critique of 'Truth' and 'Memory'
Cover reproduced with permission from Castle Hill Publishers
Available from:

Arthur Butz’s devastating The Hoax of the Twentieth Century was the broadside that heralded the destruction of the evil propaganda legacy of World War II since labeled “the Holocaust.”

The next step needed in this process of rectification was to erect the bastions from which the required decades of further assault on the Edifice of Retributive Lies could be sustained. This step was accomplished in 1994 by Germar Rudolf, then protected by the armor of his nom de plume Ernst Gauss, in the publication of Grundlagen zur Zeitgeschichte (Foundations of Contemporary History), in which a foundation indeed, firmly anchored in the bedrock of physical reality, was laid for just the redoubt from which the long-term campaign for truth could be projected.

Rudolf is a scientist, which each of us who would know the truth also must be, at least to some extent. He is a scientist who was denied his scientific doctorate under a law enacted by the very Nazi regime he is often falsely accused of supporting, and a chronicler of fact who has spent years in the prisons of his native Germany for precisely the crime of having spread scientific truths that, like those spread by Galileo, displeased the authorities in power[1].

Rudolf did not write all of Dissecting the Holocaust. His own chapters are but several among those he assembled, edited, and in some cases translated that lay bare the truths that explode the lies upon which the Holocaust edifice is built. Contributors include a Swiss who eludes the grasp of his country’s thoughtcrimes police in exile in Russia, a Frenchman who was beaten by thugs intent on suppressing his revelations, and a chemist (Rudolf himself) deported from the United States to serve years in German prisons for the crime of having expressed opinions disapproved by the (occupational) forces dominating the government of that country.

Most of the articles are translated from the German version (Grundlagen) mentioned above, though portions were originally written in Italian, French, and possibly other languages. The “default” translation credit is accorded to Victor Diodon. Whoever the translator(s) are, they have produced a work quite as readable and engaging as though it were originally written in English by a very articulate native speaker of the language.

Because Butz’s Hoax is so seminal, and so widely known among friend and foe alike of revisionism, I shall cast most of the rest of this review in terms of comparing the works. If Butz’s Hoax were the deadly right hook of the revisionist boxing champion, Rudolf’s Dissecting would be its devastating left uppercut. Between them, they leave virtually no place to hide for anyone who would defend the legend of the Holocaust as propagated from Nuremberg, Tel Aviv, or Washington—except, of course, the familiar recourse of calumny and ad hominem attack to which we have all become accustomed.

Both works are deeply analytical; the reading of either one by a person who retains a grasp upon common sense must leave the reader thoroughly disabused of the hateful legacy of the Holocaust mythology. A reading of both would leave the same person equipped (so long as memory served) to dispose of any assertion of the mainstream narrative from at least two directions, each quite decisive without the other. Analogizing such knowledge with eyesight, the result might be dubbed “binocular knowledge” of the subject of the experiences of the Jews of Europe during World War II.

It is tempting to refer to much of Dissecting as “forensics,” and indeed a number of the investigations most definitely do delve in great depth into the physical evidence that remains (or does not remain) in the places where the crimes of the Holocaust took (or did not take) place. The forensic investigations put the details of any thriller from Sir Arthur Conan Doyle or Tom Clancy utterly to shame. These are, after all, real investigations of events that are said really to have taken place. And evidence of real events is most certainly adduced in many such cases, together with interpretations that yield the firm conclusion that the events that took place were profoundly, even diametrically opposed in effect to the events alleged by parties seeking and exercising power and influence in the post-war world. The classic example, of course, is that of Zyklon B, the insecticide used by the ton in all the camps to protect the lives of the inmates, but misrepresented by latter-day spin doctors as the means of murdering the inmates in “gas chambers” of a kind never seen before or since in the known world.

But Dissecting the Holocaust is not at all limited to forensics, which are, after all, best suited to proving things that did happen, as opposed to proving that allegations such as disposing of the bodies of millions of genocide victims without a trace have to be false. A term that better encompasses the broad front on which Dissecting proceeds would be “physical,” or even “technical.”

A prime example of this would be Carlo Mattogno’s magisterial chapter titled “The Crematoria Ovens of Auschwitz and Birkenau.” In this forty-page chapter, Mattogno presents a from-the-ground-up account of the development of cremation technology followed by a detailed description of every and all of the cremation facilities installed at both Auschwitz and Birkenau, followed in turn by a detailed history of the usage of all these facilities. Mattogno does not undertake to report the actual numbers of bodies cremated; German records suffice entirely for this purpose, and those very records are dismissed by exterminationists as variously incomplete and actually fraudulent in any case. Instead, Mattogno focuses on other indications of usage and capacities including repair records, delivery and consumption of fuels (primarily coke), and even experiments conducted there and elsewhere upon the cremation of more than one corpse at a time, a favorite chestnut of exterminationists intent on “proving” the insufficiency of German records for reflecting the actual numbers of cremations.

Mattogno’s analysis relies on numbers, ever the bane of spinners of gauzy webs of deceit. And the numbers that finally emerge from his careful, independent analyses of capacities and throughput rates are—who’d a‘thunk?—entirely consistent with the numbers reflected in the Germans’ own records of usage. And grossly at odds with the numbers put about by those advocating increases in certain other numbers, such as the amounts of reparations payments still to be extracted from the hard-working children and grandchildren of the Germans who underwent the devastation wrought upon their country by the Second World War. Readers will come away from this and several other such chapters veritable experts in the field treated—which they must be in order convincingly to counter the impossible assertions made by those in thrall to the exterminationist narrative.

Butz’s Hoax of the Twentieth Century is not a work attractive to those who know what they want to believe irrespective of dispositive argument. It is a work attractive only to those who wish to assess the evidence and reasoning behind what they believe, and who are open to changing what they believe in accordance with such evidence and arguments. It is challenging to the intellectually honest, and insufferably burdensome to those who prefer to base their beliefs upon mere sentiment. All this goes double for Dissecting the Holocaust, which is so formidable on the score of both data and technical analysis that the devotees of intellectual expediency must dismiss it out of hand as obfuscatory mumbo-jumbo, leaving the daunting analytic task of merely reading it to those whose search for the truth and its foundations is truly indefatigable.

Dissecting is 612 pages long, and any of its chapters contains more factual information than many an entire book offered by the “other side.” It is set in what looks like about ten-point type, with its numerous footnotes (does one read footnotes?) in about eight-point, yielding a work of about 300,000 words (yes, I counted them), not counting the numerous photographs and their captions. It is nearly one and half times the length of Arthur Butz’s imposing opus. For the reader with large, but not stupendous, endurance, I would strongly recommend a “chapter-by-chapter” approach—perhaps a chapter a month, suitable for pensioners such as myself, or those with “day jobs.” The chapters are, unlike Butz’s, altogether independent of each other. Each drives a stake into the Holocaust monster from an entirely different direction, and none fails to penetrate its heart squarely. And it won’t ever really matter if you happen never to digest the entirety of every chapter.

Any chapter, quite by itself, will suffice for the honest reader of common sense to Dissect the Holocaust most conclusively.