For Email Newsletters you can trust
Contribute
Donate Now!
other ways to contribute »
Popular items
About the Author
Germar Rudolf

Germar Rudolf was born on October 29, 1964, in Limburg, Germany. He studied chemistry at Bonn University, where he graduated in 1989 as a Diplom-Chemist, which is comparable to a U.S. PhD degree. From 1990-1993 he prepared a German PhD thesis at the Max Planck Institute for Solid State Research in conjunction with the University of Stuttgart, Germany. Parallel to this and in his spare time, Rudolf prepared an … 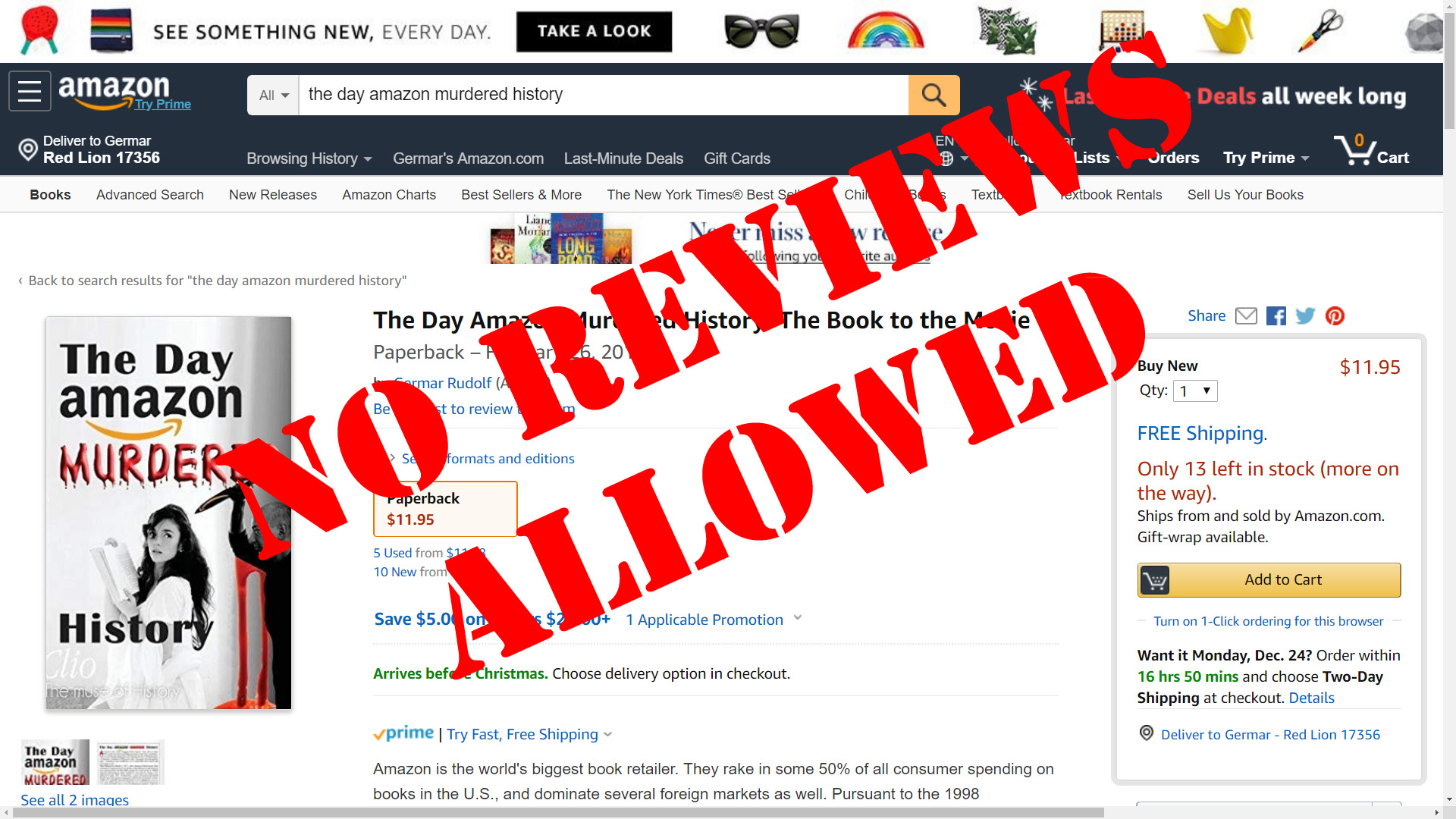 As we have documented in detail elsewhere, in early March 2017, Amazon removed from its online bookstore well over a hundred books (print and Kindle versions) on the history of World War II in general and on the persecution of the Jews in particular, after Amazon had been pressured for years, mainly by Jewish organizations, to do just that. For details, you can watch the documentary we released about this roughly a year later. (YouTube has removed the version posted on our channel from listings, search results, commenting and sharing due to allegedly "inappropriate or offensive" content, but others have reposted it, for instance here.)

Shortly after we released the above documentary in February 2018, we released a print book of the same title, The Day Amazon Murdered History, telling the same story. Amazon even carries this book. 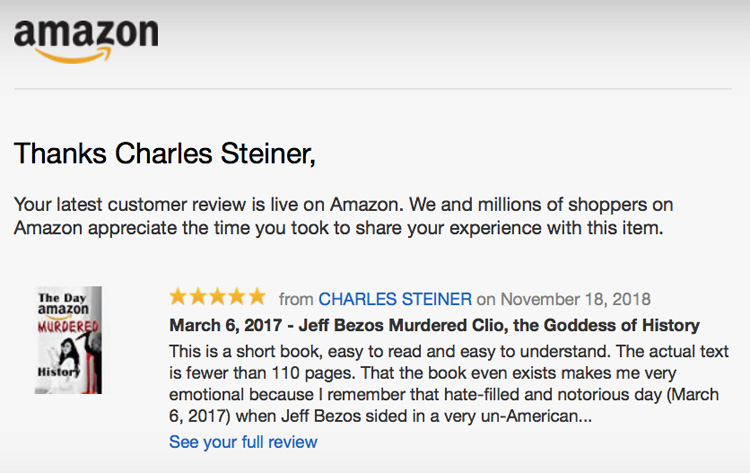 On November 18, 2018, Amazon customer Charles Steiner posted two reviews of Germar Rudolf's book on the respective Amazon web page of that book at https://www.amazon.com/dp/159148197X. You can see Amazon's system thanking him for his two reviews in the illustrations posted to the right (click on them to see a larger version). The full text of the reviews, Mr. Steiner informed us, was as follows:

This is a short, little book, easy to read and easy to understand.  The actual text is fewer than 110 pages.  What I like about the book, first of all, is that the book even exists. I remember that hate-filled and notorious day (March 6, 2017) that the author addresses in the book: the day when Jeff Bezos sided in a very un-American way with the World Jewish Congress, a foreign entity, and banned over a hundred books dealing with revisionist historians addressing the facts (or the lack of them) of the Holocaust.  It was a day that forced me to write Jeff Bezos myself and accuse him of anti-intellectualism, anti-free speech, and anti-free inquiry and to demand my money back for the Amazon Prime membership I had.  What he did was so disgusting to me that I'm amazed Amazon continues to sucker Americans with its ploys of convenience and "free enterprise." Like the Holocaust, in my opinion, Jeff Bezos himself is a hoax.  He's not American. He's a traitor to America and the U.S. Constitution.  Since that day when Jeff Bezos decided no longer to "let the truth loose" (his words) as he had stated in 1998 by publishing lots of different books, no matter the subject matter, and decided, instead, to develop an Orwellian anti-freedom campaign against truth, I've never regretted canceling my Amazon Prime membership or finding other marketplaces to buy books and other products.

This short book tells the story of what happened when Jeff Bezos decided to ban revisionist books. One business, in particular, Castle Hill Publishers, lost nearly 80% of its business.  Then cowards like American Express and PayPal joined in on the oppression and censorship against this publisher as well as others who had business dealings with revisionists in order to foster a regime of hostility against historians who merely wished to report on facts concerning Germany's camps, not dispense propaganda, about them as Jeff Bezos was doing, labeling these historians as haters and "Holocaust deniers."  Even Barnes & Noble joined the band of cowards and refused to sell books on revisionism.

As a result of all of these events, Amazon has become "the primary threat to free speech in the United States."

If you are concerned about freedom of speech and historical facts, not fantasy, and want to see "truth set loose" as Bezos once claimed he wanted, then do not buy anything from Amazon. Order from other companies through search engines, like I have. And "don't buy from eBay either, because they ban even more dissident material than Amazon does."  And BooksPrice dot com colludes with Amazon to ban books (as does Abe Books dot com).

Not even four minutes later, when checking his reviews once more, he found the following message:

Confused, Mr. Steiner tried to re-submit his review three minutes later, but when trying to do so, he received the following message:

Now, admittedly, Mr. Steiner has submitted the identical review from two separate accounts he has with Amazon, when Amazon's Community Guidelines clearly state that every individual may use only one account for submitting reviews (to prevent review spamming). Mr. Steiner was in violation of these guidelines, which stipulate that in such cases the person misusing the review function can be banned from submitting reviews about the products concerned, which is exactly what happened here.

The problem with this is threefold:

Hence two questions are raised by this:

There is an easy way for us to find out whether they censor book reviews: Let's all post reviews for this book, and let's see what happens. If you want to help us with this, please do the following:

Determining whether Amazon also manipulates sales ranks is more difficult. Amazon gets the copies it sells from book distributors, which in turn get them from us. We can check our distributor's general sales statistics of this book, but not how many of them were sold to Amazon. Considering that Amazon sells some 50% of all paperback books in the U.S., and assuming for the moment that this is true for this book as well, then we know for a fact that they sell quite a few copies of this book every month, which is the reason why they stock it in such relatively large numbers. Yet the sales rank of more than two million suggests they sell almost no copies. You can come to your own conclusions.

When it comes to Amazon, it's all worse than we thought.