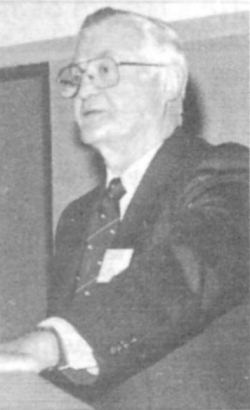 Slowly but surely, those who challenge the Six Million Holocaust story are forcing the defenders of orthodoxy to confront revisionist arguments, even if very reluctantly.

Earlier this year, for example, western Canada's leading Jewish community paper published "An Open Letter to Holocaust Deniers Everywhere." Written by Dr. Dina Golovan, a retired physician who was born in Ukraine, it appeared in the January 19 issue of the Jewish Western Bulletin of Vancouver.

It took special aim at Doug Collins, an award-winning British-born journalist and author who infuriates entrenched interests with his outspoken, common-sense views about immigration, free speech, twentieth century history, and other issues. He writes a regular column for the North Shore News of North Vancouver, British Columbia. (With his permission, a number of these columns have appeared in these pages. For more about Collms, see the Nov.-Dec. 1994 IHR Journal, pp. 43-46.)

Holocaust "denial" is dangerous, Golovan told Bulletin readers, because it "can debase our democratic society and the unity of our multicultural country." Doug Collins "does not believe in the 'gas chamber story' because he does not have evidence. But there is a great deal of evidence, and it is easy to find. Let him travel to Germany where the German government preserves concentration camps, such as Dachau and Buchenwald, as museums."

"I have visited Buchenwald camp," continued Golovan, "and saw with my own eyes crematoria where ovens swallowed thousands of lives. There IS a 'shower' room where one can see pipes that supplied the poison gas that killed people."

Unfortunately, Dr. Golovan isn't up to date on the latest version of the ever-changing Holocaust story. These days no prominent Holocaust historian accepts the story – once "proven" at the Nuremberg trial of 1945-46 – that prisoners were killed in gas chambers at Dachau and Buchenwald.

Collins responded to the editorial with a letter to the Bulletin, the complete text of which follows:

In your issue of January 19, Dina Golovan wrote "an open letter to Holocaust deniers" in which I was the star target. She stated – correctly – that I don't believe the six million story, and asked how "a person who considers himself to be a journalist can discuss a subject he is not sure about."

She went on to ask whether I did a count, and how I know the numbers. Did I work at the Statistics Bureau?, she asked. I didn't. But it is because I am a journalist that I look at stories with a critical eye, and 50 years after the war we are being drenched in a rain of Holocaust propaganda. Alfred Lilienthal, the Jewish scholar and author, has called it "Holocaustomania." So do other Jews.

I do not question that dreadful things happened under the Nazis – and not only to Jews. But the Holocaust has become a cult subject – a religion, almost. Reviewing "Schindler's List" for the Los Angeles Times [Jan. 2, 1994], Rabbi Eli Hecht asked, "When Will Jews Let It Rest?"

Professor Yehuda Bauer is Israel's leading Holocaust scholar and was quoted in the New York Times of Nov. 12, 1989, as saying, with regard to the claim that four million died at Auschwitz: "The larger figures 'have been dismissed for years, except that it hasn't reached the public yet and I think it's about time that it did'."

Since then, the official figure has been reduced, variously, to 1.5 million or 1.1 million. Jean-Claude Pressac, in his widely-touted book, "The Machinery of Mass Murder" [Les Crématoires d'Auschwitz (1993)], puts the figure at 775,000. Another "denier"?

Gas chambers? In 1988, Arno J. Mayer, a Jewish Professor of European History at Princeton stated in his work, Why Did the Heavens Not Darken?, that "certainly at Auschwitz, but probably overall, more Jews were killed by so-called 'natural' causes than by 'unnatural' ones." He believes that gas chambers existed, but stated that "sources for the study of the gas chambers are at once rare and unreliable." One would not think so from reading the never-ceasing "news," however. As Professor Robert Faurisson of France has stated: "Show me or draw me a picture of a gas chamber."

The one shown at Auschwitz will not do because [Franciszek Piper] the curator of the Museum there has admitted it is a "reconstruction" done by the Soviets after the war. For years, it was claimed that gas chambers existed in the camps in western Germany. But Simon Wiesenthal himself has admitted they did not. [See the May-June 1993 Journal, pp. 9-10.] In his TV series, "Civilization and the Jews," Abba Eban made no mention of gas chambers.

Numbers? Even "leading Holocaust scholar" Raul Hilberg of the US puts the number at 5.1 million. Is he also a "denier"? Dr. Golovan doesn't seem to know that the story keeps changing.

Why did Winston Churchill ignore such a story? In his six-volume History of the Second World War he made no reference to it, or indeed to any millions. Yet he was in possession of all the secret intelligence from ULTRA, was pro-Zionist, and had plenty to say about the persecution of the Jews by the Nazis.

Dr. Golovan mentions survivors' evidence. Well, survivors identified John Demjanjuk as concentration camp guard "Ivan the Terrible." Frank Walus was also accused of being a major war criminal. Both turned out to be innocent, and Demjanjuk's Jewish lawyer has written about how his man was framed. Not to be overlooked, either, is that [Shmuel Krakowski] the director of the Yad Vashem archives in Israel has stated that over half of the survivors "have let their imaginations run away with them" in giving their testimonies [Jerusalem Post, Aug. 17, 1986].

Moshe Peer of Montreal wrote a book about Bergen-Belsen in which he claims he was sent to the gas chamber six times but somehow escaped death. [See the Nov.-Dec. 1993 Journal, p. 24]. Well, I saw that camp in 1945 and it was a terrible sight. But there were no gas chambers. If there had been we would be seeing them nightly on TV, the camp having been captured intact.

Why "holocaustomania"? Britain's chief rabbi, Immanuel Jakobovits, has stated that the Holocaust is "an entire industry, with handsome profits for writers, researchers, film makers, monument builders, museum planners and even politicians." [Jerusalem Post, Nov. 26, 1987.] The Israeli author Boaz Evron wrote (see the UK's Jewish Chronicle, Oct. 4, 1982) that it is used "to extract still greater payments in reparations for Nazi crimes." (At last count, these amounted to $44 billion.) In Israel, it is a common joke that "there is no business like Shoah business." It is also used against freedom of the press – see the complaint against me by the Canadian Jewish Congress under Bill 33.

Until the late 1960s I accepted the six million story. But now I don't. There are too many holes in it.

In an editorial entitled "Not a Matter for Debate," the Bulletin (Feb. 16) sought to explain its decision "not to print Mr. Collin's diatribe, although this newspaper has always affirmed freedom of expression." Castigating Collins as an "avowed disbeliever, among other facts, in the existence of the crematoria during the Holocaust," the editors declared: "The existence of the Holocaust and the crematoria are historical facts, are not a matter for debate." Collins responded to this editorial with a second letter, which Bulletin editors likewise declined to publish:

Your refusal to print my response to the tirade by Dina Golovan was both cowardly and a contradiction of journalistic principles. Your reasoning, if it can be called that, was that the Holocaust is not a matter for debate. But whether you like it or not it is being debated, as are the motives for its being propagandized with such intensity half a century after the end of the war.

Sticking your heads in the sand and supporting the persecution of those who challenge your written-in-stone version of history will not prevent the debate from being continued. You complain about anti-Semitism, and at the same time encourage it by your actions.

Two more points. You stated in your editorial of Feb. 16 that I "deny the existence of crematoria during the Holocaust." Where did you get that from? I have never denied any such thing, having seen the crematoria myself. And in their piece of Feb. 24, Stark and Swartz claim that "the North Shore News refuses to publish the critics of Doug Collins." Have they been smoking something? Almost every issue of the News contains anti-Collins letters.

"As the murk of permissible evil envelopes us more and more, there is awakened in the soul of Western man a compulsive passion for the truth. The stage is reached when dispelling the murk becomes more exciting, more deeply satisfying than all the economic and personal rewards that go with submission and compliance."
—Ivor Benson