"In recent months, a lone denier, Bradley Smith, has garnered incredible amounts of attention with a tactically brilliant but devious maneuver: the placing of advertisements in student newspapers arguing there was no Holocaust." Deborah Lipstadt, Holocaust historian and the only female golem still residing in Los Angeles county, gives me the benefit of her attention on the front page of the Museum's official, State-sponsored, slick, tabloid-sized Newsletter (May 1992).

Lipstadt writes that, when she first began research on "Holocaust denial," people would ask incredulously: "Why are you wasting your time on those kooks?" In the last year her life has changed dramatically. "Now people urge me to hurry and complete my work..." It is nice to know that I have been able to add purpose and a little spice to the life of this unfortunate woman.

Lipstadt follows the prescribed drill for these exercises, using all the variations of the anti-antisemitic gambit. She, as so many others, is caught by my statement in the ad that the "gas chambers" were "life-saving" devices or fumigation cubicles, not murder weapons. Then she writes something that interests me: "Trying to deny the existence of the gas chambers is the first step in an attempt to deny the Holocaust altogether."

If I'm not mistaken, we have here a suggestion that the "holocaust" might well be viewed as something "other" than the extermination of Jews in gassing chambers. I've been saying that for ten years, and it's gratifying to find Lipstadt coming around now to this reasonable point of view. Jews don't have to give up the "holocaust" just because they give up the gas-chamber hoax. Those Jews who are inclined toward it can remain fixated on their championship status as the world's most despised victims. Who wants to challenge them for such a title? Most of the rest of us feel drawn in another direction, at least I do, toward a vision of the heroic, a kind of trashy Teutonism.

Lipstadt contends that combatting revisionism is of the utmost importance, and that institutions such as the United States Holocaust Memorial Museum, which will open on the Washington D.C. mall in March 1993, is one of the best ways to do it. "The Museum is of particular significance because [revisionism] is not just a threat to Jews and their history, but a threat to all who believe in the ultimate power of truth."

I'm with the golem on this one. I can't wait for the joint to open. Even my video camera is pulsing with excitement. My computer is straining at its cords. Revisionists are going to swarm all over this Holocaust Memorial Museum. There'd better be something real on the walls. There'd better be some proof demonstrating the existence of extennination gas chambers in this gigantic Jewish memorial or we'll turn the exhibition into a marble carnival tent. A Bertolt Brecht cabaret for the 1990s. Maybe Deborah and I'll meet there during opening ceremonies.

Maybe we'll do a little jig of recognition. 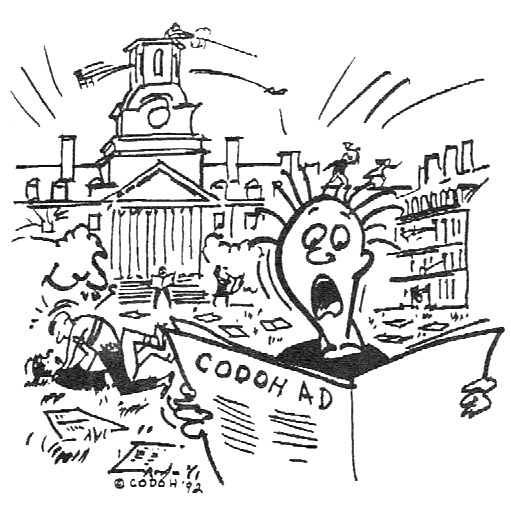 The Unites States Holocaust Memorial Museum was to be built with private funds. From the beginning that was the only aspect to the project that had any charm to it whatever. The role of the State in financing this monument to Jewish cultural influence in the United States was limited to the donation of the immensely valuable land on the Capitol Mall, and $2 1/2 million in start-up funds. Now I read (Ganpac Brief, August 92) that, according to the Congressional Budget Office, Congress has already appropriated $33 million dollars for the Museum above the authorized ceiling.

Congressman Peter J. Kostmayer (D-PA), who may be Jewish, introduced and saw passed H.R. 2660 titled "A bill to authorize appropriations for the U.S. Holocaust Memorial Council, and for other purposes." What has been authorized? The CBO estimates about $18.3 million for fiscal year 1993, and $15.4 million for each additional year until the year 2000. That is, some $110 million, adjusted for inflation, according to Tom DeLay (R-TX), who may not be Jewish. Another gift to the American people from our friends in the Holocaust Lobby.

In the past I've worried about how much freedom revisionists will be allowed in this private Museum built with private monies. No need to worry any more. It's open to all of us now. It's a Federal museum built with taxpayer funds. Excellent news!

I wasn't going to bother, what good would it do?, but I was encouraged to respond to the Lipstadt article with a letter to the editor of The Newsletter, so I penned a few lines:

In the May issue of "The: Newsletter," Professor Deborah Lipstadt argues that publication of my ad, "The Holocaust Controversy: The Case for Open Debate," in College newspapers is "not an issue of censorship but one of differentiating between an opinion—however controversial—and obvious falsehoods designed to stimulate prejudice and antisemitism."

While my ad has been printed in student newspapers at a dozen highly regarded universities, no professor has pointed to a single error of fact in it. Why is that? If The Newsletter has found such an error of fact, I would be grateful for it being brought to my attention so I can correct the record. If there are, in fact, no errors of fact in the ad and it is denied publication for political reasons, then there certainly IS a "free speech issue involved.

Professor Lipstadt misrepresents my views by suggesting that I accuse "Zionist establishment groups"—alone—of suppressing open debate on the Holocaust. I make it perfectly clear in the ad that academicians and intellectuals of every stripe, without much regard to ethnicity (or politics), have devoted themselves to such activities.

Professor Lipstadt misrepresents my comments about the "delousing" chambers at Auschwitz. It's quite clear in the ad that I do not consider those small, professionally designed gassing ("delousing") chambers that were scattered all over Auschwitz-Birkenau to be the same five buildings which it is claimed had large improvised rooms for mass executions.

Professor Lipstadt writes of the "ultimate power of truth." If she believes that there is some better way to get at it than through free inquiry and open debate, particularly on university campuses, then I'm all ears.

Along with the letter for publication I sent a cover letter suggesting that, since The Newsletter is published with public monies for a Council funded with public monies, I should have the right to reply to a direct attack on my honesty and character. Today I received a reply from the Executive Director of the United States Holocaust Memorial Council:

Concerning your July 7th letter to the editor, the legal counsel of the United States Holocaust Memorial Council (USHMC) advises us, from a careful review of pertinent Federal acts and statutes as well as of applicable court decisions, that USHMC has the same liberty as do newspapers in exercising control and discretion over the content of "The Newsleller." We therefore choose not to publish your letter.

As you may not be aware, USHMC was established in 1980 by a unanimous Act of Congress and was mandated to create a living memorial to the millions of victims of Nazi fanaticism who perished in the Holocaust. Thc Council and its programs were established on the power of an ideal—because the Carter, Reagan, and Bush Administrations believed that all Americans could learn from the Holocaust's lessons of personal responsibility and choice in sustaining democratic values.

You may be aware that General Dwight D. Eisenhower, while Supreme Commander of Allied Forces in Europe, decided to visit Ohrdruf, a forced labor camp in Germany, to witness the extent of Nazi atrocities. On April 12, 1945, Eisenhower wrote to Chief of staff George Marshall "…I made the visit deliberately, in order to be in a position to give first-hand evidence of these things if ever, in the future, there develops a tendency to charge those allegations merely to 'propaganda.'…"

Please do not hesitate to contact us if you wish further information.

I don't feel I should bother, but maybe I'll write asking Ms. Bloomfield why she believes Dwight Eisenhower decided to not mention the "gas chambers" in his memoir Crusade in Europe? Maybe she knows why he decided that discretion might be the better part of honesty?