The patch-work quilt that passes for establishment Holocaust history has grown so tattered that the tailors and seamstresses responsible for its condition are finding it ever more difficult to keep it in good repair. Now, a stunning new video written, produced and narrated by a young Jewish-American Revisionist named David Cole tears yet another gaping hole in the increasingly threadbare legend.

The main value of this production – which promises to be a Revisionist “best-seller” – is Cole’s interview with a senior Auschwitz State Museum official, who admits on camera that the Auschwitz “gas chamber” shown to hundreds of thousands of tourists annually is a postwar reconstruction, and thus confirms an important point that Revisionists have been making for years.

Cole visited Europe in September 1992 to inspect the sites of the wartime German concentration camps of Auschwitz, Birkenau, Majdanek, Mauthausen, and Dachau, and to record his findings on videotape. Knowing that Revisionists had sometimes been rebuffed in earlier attempts to gather information at such sites, Cole presented himself as a concerned Jewish researcher determined to collect unassailable proof for the Holocaust extermination story that he could use back home in the United States to refute the claims of Revisionists.

At Auschwitz he got more than he bargained for. Wearing a traditional Jewish yarmulke, which seemed to ensure friendly cooperation by authorities, Cole hired an official Museum guide named Alicia to personally show him around the camp site. She first took Cole through the obligatory tourist inspection of the exhibits, a ritual designed to encourage a properly reverential and uncritical attitude on the part of visitors. Cole remained unimpressed, though, in large part because Alicia was unable to provide satisfactory answers to his questions. “At this point,” Cole comments, “it was looking pretty bad for someone looking for objective proofs of the gas chamber, and some of the proofs they present actually work against the concept.”

Alicia then took Cole to the high point of the tour, the supposed extermination “gas chamber” in the Auschwitz I main camp. Inside the “gas chamber” itself, Cole’s questions became more specific: Were there ever interior walls in this room? Were those pipes and drains ever operational and connected to plumbing facilities? Do the obvious scars on the walls and floor mean that the chamber was once sub-divided into smaller rooms?

Cole’s pointed questions soon thoroughly frustrated his guide. As he explains in his video, “Feeling somewhat exasperated at the fact that nothing she could say would shut me up, Alicia went to get a woman who was introduced to me as the supervisor of tour guides for the Auschwitz State Museum.”

The supervisor only further confused things. As a perplexed Alicia looked on, the supervisor casually discredited a long-standing “exterminationist” claim about the Auschwitz I “gas chamber.” Flatly disagreeing with what Alicia had told Cole (and doubtless many other visitors), the supervisor explained that the vents in the roof, through which deadly Zyklon B was supposedly introduced, were put in after the war.

With the contradictions adding up, the supervisor then suggested that Cole meet with the Museum’s “head scientist,” Dr. Piper, to obtain really authoritative answers to his persistent questions. Cole readily accepted the offer, and the next day he met with Piper in his office.

Dr. Franciszek Piper (pronounced “peeper”) is archives director and Senior Curator of the Polish government’s Auschwitz State Museum. Cole was indeed fortunate to be able to put pointed questions to a man who is internationally recognized as a foremost Holocaust authority, and to record the entire interview on videotape.

Until just a few years ago Piper fully endorsed the official view that four million people – most of them Jews – had been killed at Auschwitz. This was still the figure given in an official Auschwitz State Museum guide book distributed to visitors as late as 1988.[1] In July 1990, though, Piper (along with Israeli officials) abruptly abandoned the long-standing figure, announcing that the estimated number of Auschwitz victims was actually about 1.1 million.[2] As Cole stresses, this drastic 75 percent reduction in the “official” estimate is no small revision. (In a lengthy article on this subject published in 1991, Piper suggested that further revision might be forthcoming.)[3]

Cole’s most important question to Piper is probably this: Is the “gas chamber” in the Auschwitz I main camp in its original state, or is it a reconstruction? Piper’s response:

The first and the oldest gas chamber, which existed in Auschwitz I [main camp], this camp where we are now here, operated from autumn 1941 to December 1942, approximately one year. The crematorium near by this gas chamber worked longer, to the middle of 1943.

In July 1943 the crematorium was stopped and the bodies of prisoners [who] died at Auschwitz at the time were transferred to Birkenau.

In 1944, in connection with bombardment of Auschwitz by the Allied air forces, [the] empty crematorium number one and gas chamber at Auschwitz I were adapted as air [raid] shelters.

At this time, additional walls were built inside the former gas chamber. An additional entrance was made from the east side of the gas chamber, and openings in the ceiling, [through which] the gas Zyklon B was discharged [to the] inside, were at the time liquidated.

So after the liberation of the camp, the former gas chamber presented a view of [an] air [raid] shelter. In order to gain an earlier view… [or] earlier sight… of this object, the inside walls built in 1944 were removed and openings in the ceiling were made anew.

So now this gas chamber is very similar to this one which existed in 1941–1942, but not all details were made there, so there is no gas-tight door, for instance, and the additional entrance from east side rested [remained] as it was made in 1944. Such changes were made after the war to gain [the] earlier view of this object. 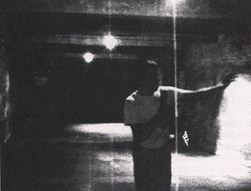 David Cole inside the Auschwitz "gas chamber" that is shown to hundreds of thousands of tourists yearly.

Piper’s startling acknowledgment to Cole has special legal significance for David Irving. In May 1992 a Munich court fined the British historian $6,000 for having told a German audience that the room in Auschwitz that has been portrayed to tourists as an extermination gas chamber is a phony reconstruction (“Attrappen”). The judge in the case rejected the defense request to call Piper as a witness to confirm that what Irving had said was, in fact, the truth. (More than that, the German judge refused to permit Irving to present any evidence whatsoever in its own defense. Irving’s conviction was upheld by another German court in January 1993.)[4] 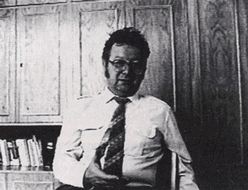 Dr. Piper, Auschwitz State Museum Senior Curator, explains that the room displayed to tourists as an extermination “gas chamber” in its “original state” is actually a postwar reconstruction.

Although Piper maintains that the “gas chamber” was restored to its “original” state as a killing facility, this postwar reconstruction is in fact worthless as proof of anything because there is not a single wartime document or photograph to confirm just what the alleged homicidal “gas chamber” looked like.

Elsewhere during his interview, Cole raises another important issue. Why is it, he asks Piper, that whereas there are obvious and abundant blue stains (caused by contact with Zyklon B gas) on the walls of the non-homicidal chambers used to disinfect clothes, there are no such stains or traces on the walls of the alleged homicidal “gas chambers”? Piper responds:

In the gas chambers, the Zyklon B was operated a very short time, about 20 [or] 30 minutes during 24 hours, and in the [non-homicidal] disinfection rooms it operated day and night.

This remarkable explanation creates yet another problem. According to the most authoritative Holocaust historians, a single “gassing” operation took at least 20 or 30 minutes. If, as Piper maintains, the alleged gas chambers were operated for only 20 or 30 minutes a day, no more than a single gassing per day could have been carried out. This is hardly consistent with an alleged German program of mass extermination.

As “expert” as he is about the Auschwitz gas chamber, it is fitting that Piper still believes that the Germans made soap from the bodies of their wartime victims – a once widely-accepted story that has since been utterly discredited.[5]

In its own way, “David Cole Interviews Dr. Franciszek Piper,” may well prove to be as powerful a blow to the Holocaust extermination story, and the formidable lobby that defends it, as was Fred Leuchter’s famous 1988 forensic report.

By dramatically pointing up glaring contradictions between what a senior official of the Auschwitz State Museum believes and what the gullible public is told, Cole exposes the bad faith on the part of the Holocaust establishment, and underscores its fear of open discussion and free inquiry.

Cole’s interview with Piper gives the lie to the claim that Holocaust historians agree on all the main points of the extermination story, and refutes the insistent assertion that there is no place for Revisionist input into the still continuing debate. 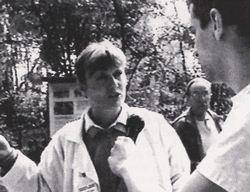 Alicia, an Auschwitz tour guide, responds to a question by David Cole.

While this is almost certainly the best video presentation of the Revisionist view of the Holocaust story produced so far, its technical quality is unfortunately not ideal. Cole’s narration is often obtrusive and less than adroit. For example, the screen occasionally goes black as Cole finishes making this or that point, a poor use of the medium and one that disrupts the pace of the presentation. One also has the impression that the text was hastily scripted and hurriedly edited.

Still, these are relatively minor flaws in an otherwise well-made video. With a good grasp of the subtleties of Holocaust claims and the Revisionist responses, and the ability to discern the critical nub of an issue, Cole deserves praise for this effective and persuasive production. (Happily, he is working on further videos based on visits to other camp sites.)

While this video is ideal for those who have no previous familiarity with the Revisionist perspective on this issue, veteran skeptics of the Holocaust story will also appreciate it. Slightly less than an hour in length, it is also suited for broadcast on local public access television stations. (Revisionist activists, please take note!)

This video is part of a still-continuing process of prying truth from those who are reluctant to acknowledge it. Ultimately, the entire Holocaust story will be discredited as Piper and others like him are obliged to respond to further Revisionist questioning.

Watch this video online on HolocaustHandbooks.com!

The VHS videotape, “David Cole Interviews Dr. Franciszek Piper,” is available from the IHR for $49, plus, $2.50 shipping. [check www.ihr.org for current availability and price; ed.]