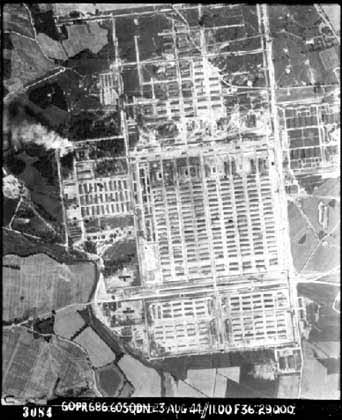 Picture as published by Spiegel magazine.[1] Below: section enlargement with explanatory captions. 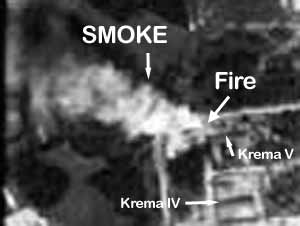 I think it was in the late nineties that a small news item in England mentioned that millions of air photos of WWII taken by the Royal British Air Force (and perhaps even some photos by the German Luftwaffe confiscated after the war by the British) were hidden in an Archive of Keele University. Nobody else seemed to pay a lot of attention to this news item. At that time I lived in England, and at one of my meetings with my revisionist friend Jeff Roberts, we discussed this topic. (Roberts is the creator of Carlos W. Porter’s website www.cwporter.com). We agreed that it was necessary to get access to this archive in the hope of finding more air photo evidence regarding alleged locations of the Holocaust.

Jeff subsequently traveled many times to Keele University. He found out that Keele University had many British as well as captured German air photos, many of the latter covering areas behind the German-Russian front during the war. The negatives were in total disorder, its archive threatened to be dissolved due to lack of funds. After many visits, many hours of talking to the people in charge, he finally managed to get a project started to organize these air photos, in which he selflessly assisted, and he even indicated to me some two years ago that he appears to have succeeded in convincing Keele University to make those photos publicly accessible by offering them on the Internet.

In January of 2004, the international news media announced that Keele University has now indeed opened a website offering access to some of its air photos, accessible at www.evidenceincamera.co.uk. Unfortunately, however, only the British air photos seem to be offered for public access, but not the German negatives.

Due to the massive public attention in the weeks that followed the launching and announcement of the site, requests had been so huge that the bandwidth used exceeded the amount allotted to their server, resulting in the site being taken down temporarily.

As could be expected, the media hype generated around this “discovery” – a discovery made possible because of the selfless efforts of just one almost unknown revisionist – was filled with the usual lies. The German news magazine Der Spiegel, for example, headlined on Jan. 19, 2004, “Five Million Pictures of Horror” and quoted the British news Agency Reuters:

“Burning Corpses in the concentration camp [...] concentration camp Auschwitz on August 23, 1944: white clouds of smoke from burning corpses. [...] One of the photos shows the concentration camp of Auschwitz at the climax of extermination madness. On this picture, a white cloud rolls over the country. According to the National Archive, it stems from a mass grave and not from the chimney of a crematorium. In 1943 and 1944, some 430,000 Hungarian Jews were murdered in Auschwitz – too many to be cremated in the cremation ovens of the extermination camp. [...] ‘The pictures moved my very much,’ says Allan Williams of the British Aerial Reconnaissance Archives at Keele University. ‘To my knowledge no other reconnaissance photos of Auschwitz of that time exist.’”

That is of course wrong, since the U.S. published some of the photos of that camp, taken by U.S. and Canadian airplanes, back in 1979,[2] and John C. Ball published his analysis of many air photos of the U.S. National Archives relating to alleged Holocaust crimes scenes back in 1992.[3]

From this series of newly released British photos, one copy found particular attention: a photo of the Auschwitz-Birkenau camp of Aug. 23, 1944 (see illustration and the mentioned Spiegel article). It shows smoke coming from an small area north of crematorium V, that is, from the same area where a little smoke is also seen on a photo of May 31, 1944, as it was published and analyzed by Ball, and another photo taken by a German plane on July 8, 1994 (see illustration). 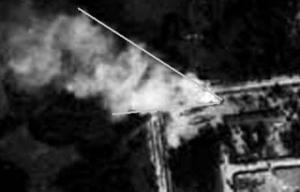 British air photo of Auschwitz, Aug. 23, 1944, section with smoke close to crematorium V. Lines added to trace back location and size of fire. 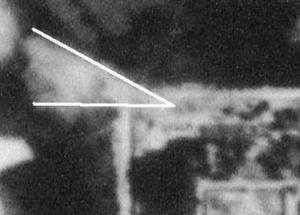 German air photo of Auschwitz of July 8, 1944, section with smoke close to crematorium V.[4] Lines added to trace back location and size of fire.

But before shrieking “This is the proof for the gas chambers, for the extermination, for mass murder, for the Holocaust,” I may remind the reader that this picture shows smoke coming from an area measuring perhaps some 100 square meters or less. According to witness claims and to the established version of the ‘Holocaust,’ however, the pits, in which ten thousand of Jews were allegedly incinerated, were located outside of the camp’s immediate perimeter, close to the so-called Bunkers, and they would have covered an area of many tens of thousands square meters, if they really had been able to incinerate that many bodies. In addition to this, we would expect not only to see smoke in this pictures, but also other obvious traces of: pits, mounds of excavated earth, piles of woods as fuel, a wide area around these items marked by massive human activity (i.e., transporting of corpses, fuel, ashes, etc.), leading to the destruction of the vegetation in this area.

Nothing of this can be seen on this or other photos taken between May and September 1944.

Though this one photo of the Royal Air Force indicates that a moderate size fire burned north of crematorium V on August 23, 1944, it does not show exactly what burned in this fire. But this photo clearly refutes claims of mass extermination with subsequent mass incineration in huge pits – just as similar air photos taken by Canadian and American reconnaissance planes. This very air photo, which is published all over the world as evidence allegedly proving the Holocaust in Auschwitz, actually proves exactly the opposite: the Holocaust is a lie, and the media continue to lie about this topic.