Yuri N. Maltsev, a native of Russia, escaped from the Soviet Union a few years before its downfall. He is associate professor of economics at Carthage College (Kenosha, Wise.), and a senior fellow of the Ludwig von Mises Institute (Auburn, Ala. 36849-5301). This essay is reprinted from the Nov. 1994 issue of The Free Market, a monthly newsletter published by the Mises Institute.

Post-communist history has been a chronicle of economic failures, ethnic wars, and political upheavals. But in the midst of all this gloom, one success story had been completely overlooked. Its name is Estonia, which could be called "the little country that could."

Estonia has made an incredible transition from Soviet slavery to economic liberty, and it serves as proof that free markets are the only sure way out of Communist serfdom.

During the period while it was ruled by the Soviet Union (1940-91), Estonia's 1.5 million people faced unthinkable economic coercion and political brutality. The central government attempted to suffocate national and religious identity, and independent political thought. In short order, Kremlin planners destroyed one of the most prosperous countries on earth.

And they did not do it without the blessing of the US government, then headed by Franklin Delano Roosevelt. It was FDR who suggested to Stalin that he solve the "problem" of Baltic political resistance by forcibly moving the populations of Estonia, Latvia, and Lithuania to Sweden. This "ethnic cleansing" would have wiped away three nations with rich cultural heritages, solely to please the mass murderer in the Kremlin.

Interestingly, this deal was rejected by Stalin, who did not want to have millions of discontented Balts on the Soviet border. His alternative was to transport tens of thousands of leading Estonians to gruesome death in the Gulag. More than one hundred thousand Balts perished in Siberia.

After all this, Estonia regained its independence on August 20,1991, after the failure of the hard-line Communist coup in Moscow. Since then, the country has been at the forefront of political and economic reforms in Eastern Europe. It set out to reverse completely the errors of the past.

Estonia moved quickly to rebuild Western principles of the rule of law. It privatized state land and industry at an unprecedented pace. It repealed all price controls. It legalized all forms of market production and exchange which had flourished only in underground markets. It attracted foreign investments by adopting low taxes and protecting property and other human rights.

It did all this against the advice of international planning agencies. As a result, Estonia has not been a favored recipient of foreign aid. The president of Estonia says that is just fine. No country dependent on foreign aid has become prosperous. And today, this small nation can boast the highest rates of economic growth in Europe (more than five percent) and very low unemployment.

The high Soviet inflation rate was reigned in by a hard currency and sound monetary policies. In June 1992, Estonia replaced the Russian ruble with the Estonian kroon, a hard currency tied to the German mark. The kroon is pegged to the D-mark at an exchange rate of eight to one, as well as to Estonia's gold reserves, which back no less than 25 percent of the money supply.

Today Estonia has the strongest and most stable monetary regime of any of the 15 former Soviet republics. The average level of inflation is down to a monthly rate of less than one percent, compared with 30 percent in Russia. The government is committed to a hard money regime, not only because it provides economic stability but also because it works as a restraint on government growth.

Estonia maintains a liberal trade regime with practically no tariffs. Companies operating in Eastern Europe point to Estonia as being five years ahead of other East European countries, and investment advisers consider it the emerging Hong Kong of Europe. Foreign investment is growing annually by some $250 million.

The new class of Estonian leaders, in the private sector and the government, is comprised of young people, who are well educated in free-market economics. The present government was formed by the conservative-libertarian Pro Patria ("For the Fatherland") Party. Other factions in Parliament are the Royalists, Moderates, and Centrists. (There is no Socialist or Communist Party.) All parties are committed to continuing reforms and to further privatization.

"We don't want to copy welfare monsters like Sweden and our other Northern neighbors," Prime Minister Mart Laar told me. Laar is 33 years old, a University of Tartu professor well acquainted with the works of Ludwig von Mises, F.A. Hayek, and the other Austrian School economists. Recently he was turned away by a security guard in Brussels. "I don't believe you could be a prime minister anywhere," said the guard in reference to his youth.

The unofficial slogan of the governing party is: "Property rights are the key to economic success, cultural revival, and political freedom." The Foreign Office spokeswoman says "It is a privilege to be working with people who want to be to Estonia what Thomas Jefferson and George Mason were to America." She believes government should be strong enough to protect liberty and property, but not one bit more. She points out that privatization and property rights enforcement have already created a strong middle class. 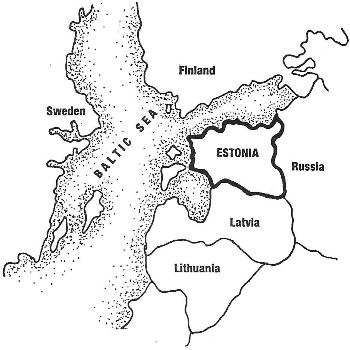 Estonia, a small northern European nation on the Baltic sea, has a population of 1.59 million. Only 17,400 square miles in size, the country is smaller than West Virginia. A non-Slavic and traditionally Lutheran people, Estonians are close ethnic and linguistic relatives of the Finns.

In 1918, at the close of the First World War, Estonia was proclaimed an independent republic. In 1934 President Konstantin Pats instituted an authoritarian regime, abolishing all political parties. The 1918-1940 independence era was marked by rapid economic growth and a dramatic rise in living standards, with large exports of grain and dairy products. Between 1931 and 1938, for example, exports more than doubled. In the industrial field perhaps the most important single achievement was the creation of an oil shale industry, whereby oil and petroleum fuels were extracted from oil-bearing shale.

In August 1939, Hitler's Foreign Minister, von Ribbentrop, and Stalin's Foreign Minister, Molotov, concluded the German-Soviet Non-Aggression Pact, which divided Eastern Europe into German and Soviet spheres of influence. Estonia and the other Baltic countries were assigned to the Soviet sphere. However, contrary to often-repeated characterizations of the Pact, the Hitler government neither anticipated nor approved of Stalin's subsequent outright annexation of the Baltic countries.

Soviet troops brutally ended Estonia's period of national freedom in the summer of 1940, when the country was forcibly incorporated into the USSR. During the 1940-1941 period, many political, business and religious leaders were killed or deported. Civil servants, non-Communist political leaders, army officers, judges, clergymen and businessmen were particular targets. In 1940-1941, some 120,000 Estonians – about one-tenth of the entire population – were rounded up by the Soviet secret police and deported to Gulag camps, where many perished.

In 1941 German troops liberated Estonia along with the neighboring Baltic countries of Latvia and Lithuania – from Soviet rule. As part of the "Ostland" region – which also included Latvia, Lithuania and Belarus (White Russia) – it remained under German occupation until 1944.

Estonian nationalism was encouraged during this period, and many young men volunteered to fight with the Germans against the Soviets, most notably in the Estonian Waffen SS.

As Soviet troops advanced, many Estonians fled the country. About 33,000 escaped with the retreating German forces to Germany, and another 30,000 went by sea to Sweden.

The restoration of Soviet rule brought further mass arrests and deportations: some 20,000 Estonians were rounded up and sent to camps in 1945-1946, and about 40,000 were deported in March 1949. Still, even under Soviet rule, Estonia was more economically successful and prosperous than other regions of the Soviet Union.

As part of the Soviet "multicultural" policy, people from other parts of the USSR were encouraged to settle in Estonia. As a result, today only about 60 percent of the country's population is ethnically Estonian. Only Estonians are now permitted to vote in elections, which means that about 38 percent of the population – mainly ethnic Russians – play no role in political life.