There is currently no topic of human history that is treated more emotionally and one-sidedly in public than the Holocaust. It represents the central taboo of western civilization, and to question it is the epitome of heresy, punishable by imprisonment in many western 'democracies.'

Given this state of affairs, the expert on the evaluation of eyewitness testimony, Professor Elizabeth Loftus, pointed out in 1991 that, for many different reasons, testimony pertaining to actual (or merely alleged) National Socialist atrocities, witnessed in a particularly high stage of emotion, is less reliable than almost any other testimony. Elaborating, she observes:

It cannot surprise that Prof. Loftus' research was highly praised and welcome by revisionist scholars – except for the aspects exposing Prof. Loftus' apparent moral deficiencies in handling the Demjanjuk affair. After all, she confirms what revisionists have claimed for decades: that witness testimonies about the 'Holocaust' are unbelievable to an extent that one has to ignore them totally in research on this topic, if one intends to come to scholarly tenable conclusions.

Of course, this confirmation by the world's foremost expert in witness testimony critique was neither intentional nor welcome, but this is a different matter. When Michael Shermer, a dedicated adversary of revisionism, directed Prof. Loftus' attention to the fact that her work was intensively quoted and used by revisionists, her reaction was indicative:[3]

"She was shocked and had no idea about what was going on."

This shows clearly that Prof. Loftus is obviously still not prepared to apply the consequences of her own research to those court trials, from which her own people (or "race," as she puts it) benefit enormously politically, socially, and financially.

Objectively seen, there are not many differences between the trial against John Demjanjuk on one hand and almost all other trials conducted against hundreds and thousands of other defendants accused of having committed crimes during the 'Holocaust' on the other hand, particularly those, which attracted considerable media attention, like the Jerusalem trial against Adolf Eichmann, the Frankfurt Auschwitz trial, the Düsseldorf Majdanek trial, the trials against Klaus Barbie, Maurice Papon, Erich Priebke and many others more.

It is also revealing that in her list of factors potentially distorting and manipulating the memory of witnesses involved in such trials, Prof. Loftus omits (or suppresses?) three very important and unique factors which are almost never present in any other case:

All three factors are much more 'persuasive' than those already listed by Prof. Loftus, leading to an additional tendency of memories to become deformed.

In its September issue of 1997, the popular scientific magazine Scientific American published an article by Prof. Loftus with the title "Creating False Memories".[4] As already mentioned in earlier articles in this issue of The Revisionist, one of the focuses of Prof. Loftus' research is the attempt to verify, under which circumstances and to which extent false childhood memories can form. The background of these efforts was a steeply rising number of alleged childhood abuse cases primarily in the United States, but also in Europe, in the 1980s and early 1990s. These trials, which led to the destruction of many individual lives as well as entire families, caused many headlines in the media at that time due to their very controversial nature. They were sometimes reminiscent of show trials, in particular after it had become apparent during some of these cases that the testimony of witnesses involved had been manipulated by suggestive interview techniques of psychologists and psychiatrists. As a result, modern criticism of witness testimony was booming during those two decades.

The main obstacle to psychologically investigating false memory is that one cannot apply techniques while experimenting with humans which would lead to mental suffering, as this is of course morally unacceptable and legally prohibited. Thus, Prof. Loftus and her co-workers always had to apply rather mild methods and deal only with such (invented) events, which would not lead to traumatic experiences. It is needless to say that the results of such experiments are not equal to what could be expected with false memories formed by suggestive techniques dealing with factual (or only alleged) traumatic events like childhood abuse or an orgy of mass slaughter.

Graph 1: It apparently becomes progressively easier to recall merely suggested childhood experiences as time goes by, because the details of what is suggested become more and more familiar and because the original source for this information is forgotten. American researcher Ira Hyman confronted the persons involved in these experiments not only with several real events of their childhood - confirmed by their relatives - but also with an embarrassing event which was actually freely invented: It was claimed that during a wedding they had poured a bowl of punch over the dress of the bride's parents. During the first interview, not a single participant accepted this story as true; during later interviews, however, some 18% and later even 25% claimed to be able to recall this event.

Graph, text and photos according to "Spektrum der Wissenschaft" 1(1998) 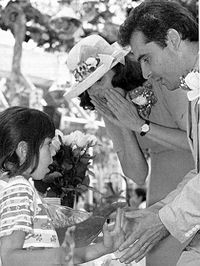 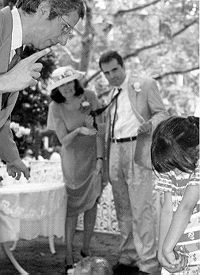 About the Ease to Manipulate Human Memory

Graph 1 shows the results of experiments presented in Loftus' article. From this and other experiments, she concluded that freely invented events put into a framework of real events are increasingly accepted as true and part of the subject's memory, the more often they are suggested to be real and the more one forgets about the true source of this 'information.' Whereas all persons subjected to this experiment insisted during the first interview that the suggested event did not occur, the percentage of persons accepting the invented event as true and part of their memory rose from 18% during the second interview up to 25% during the third. It would be interesting to find out how high this rate of manipulated memories would grow if these persons would be subjected to hundreds or perhaps even thousands of such interviews, a number which can be easily assumed for so-called 'Holocaust' witnesses, who have been exposed to a steady flow of many interrogations, interviews, story telling, anecdotal exchanges, and media reports for six decades.

It clearly results from Prof. Loftus' work that a considerable number of all humans are susceptible even to the most simple manipulations of their memory. Manipulating factors are omnipresent in our environment, in particular in the form of mass media and all other forms of communication, of which we draw many bits of information on a daily basis. But we hardly ever memorize the original source of this information alongside with the information.

Unfortunately, Prof. Loftus' work does not contain any statements as to how the manipulation of human memory increases with the rise of emotional pressure. Since experiments with humans are limited in this regard, we probably must depend on real cases to investigate this question.

The case of the trial against John Demjanjuk, however, has shown that the susceptibility of our memory for manipulation rises with the increase of emotional stress we are exposed to, which is in accordance with the predominant view.

Because the 'Holocaust' is an event of permanent emotional stress especially to witnesses, we have to expect a massive susceptibility for memory deformation in this field. It must remain open just how much of the stress perceived by those witnesses is a result of real memory and how much is the result of memories merely induced by an uninterrupted feeding of suggestive 'information' leading to hysterical responses of the subject.

Lack of Psychological Critique of Witnesses to History

It would be worthwhile if finally experts on witness testimony would dedicate some of their time and resources to investigate the topic "witness testimony in modern history." This does not even have to start with the hot potato Holocaust, because for general reasons all witness accounts relating to events of modern history are problematic, as they are often tainted by political interest and social paradigms and pressures.

When doing such research, one could proceed as follows:

Such a project would do research on various different events in modern history involving a broad variety of emotional 'ballast.' One could pick various recent historical events with different emotional impacts on witnesses. The range would start with events which would not cause any considerably emotional involvement of witnesses to such events where most witnesses are emotionally touched in a massive way, for instance: The visit of a U.S. president to European countries; the uprising of Hungarians in 1956; the expulsion of fifteen million Germans from eastern Germany and eastern Europe.

Similar research could be done for events which were similarly traumatic for participants, but which received different degrees of media coverage, like a plane crash; a minor local war, and a major war getting broad media attention lasting even after the war is over.

It would be interesting to find out, whether or not the observation already made in other contexts could be confirmed that memories of witnesses are more susceptible to manipulation with an increasing emotional impact of the witnessed event and with an increased reporting about this event in the media.

Needless to say that for the witnesses concerned, the 'Holocaust' will always be at the top of the scale of emotional stress and trauma, with which we have finally determined what it really is that makes the 'Holocaust' unique: The mind and memory manipulating emotions linked to it.