Reflections on the Campus Project
by Roberto Hernández
This content is also available in Spanish
Published: 2018-02-20

About two years ago, CODOH lost its key member and founder. Bradley R. Smith, ironically on his birthday, Feb 18, in the morning after battling with cancer for nearly eight years, died.

He was a unique collaborator, and revisionist; in fact, during much of his life he directed CODOH and made the big decisions as to where CODOH should focus and what kinds of enterprises CODOH should embark on. Never alone of course; CODOH has never been a one-man organization.

But there is no denying that Bradley Smith was not the scholarly type. Through the many years, about 35, in revisionism, I think, he neither produced a research paper nor a book in which he published any finding on a research topic, though he wrote many short essays on free speech and the lack of it on university campuses, the lack of integrity of the “Professorial Class” so this made him a different “breed”  from many other revisionists. He was a sharp observer and writer, I daresay, one of the best of his generation. Maybe in the future his work will come out of the shadows. 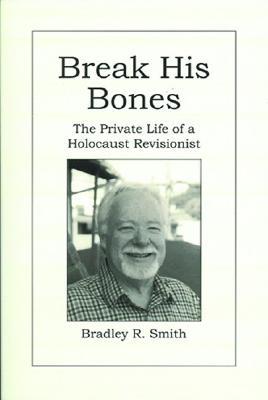 In his book Confessions of a Holocaust Revisionist, he “confesses” in very un-embarrassed and open fashion what few can actually say let alone write to leave a record for anyone to read. In the very preface of his book he writes “Here I am, 57 years old, 5’10” tall and 240 pounds, regrettably.” Then later he adds “My lack of faith in information would wring the heart of the most advanced computer. Experience and sensibility are easier for me.”

Indeed, this was his trademark in revisionism. Experience and sensitivity were all over his work.  He was, even though the phrase by now is a bit corny “The human face of revisionism.” That is what he did best. To be himself, open, sincere, brutally honest at times, but never cocky or presumptuous about his work nor about his notoriety.

As he was one of  only few revisionists who gave up his private life and openly fought against those who believe we don’t have the right to express our opinion, that we are nothing but scum, evil that has to be fought and gotten rid of…Bradley decided to let his face be seen and with that represent all those who could not bring themselves to do the same. Just so, he challenged the bigots, the powerful men with their interests that wanted to suppress revisionism because it meant bad news for them.

He became the man everyone knew when talking about revisionism in America. This is said without exaggeration; he appeared a few times on national television and gave hundreds of radio interviews but above all he was always a simple guy with a simplicity that is not common nor easy to come by. His Twitter account when describing job or occupation said "simple writer."

So how did Bradley Smith and CODOH become a real threat for those at the ADL, Hillel and other Jewish organizations? It was Bradley’s outreach program that he never quit until the last day he stepped into his office, just a few days before his death.

Part of this outreach was to promote revisionist works, such as we continue to do at CODOH. A fundamental part of what revisionism must do and share with others is to enlighten those who believe in this terrifying view of history where one is total evil and the other is heroes and justice. We are never giving up the right to forward our ideas through all the channels we have at our disposal. Social media, for example, has played a key role in disseminating “open debate” on the Holocaust. We don’t indoctrinate like the “others” do. We tell our story, and it’s open to discussion.

In the case of Bradley Smith, what he wanted to do ultimately got him into a bit of a pickle; he directed his outreach and promoted an “open debate” on the Holocaust to students and academics in the American university.

He believed that “the Professorial Class” should be open about the Holocaust narrative and needed to be honest about the one historical topic that had been made taboo on the university campus. Students were not allowed to form their own opinions; this with the complicity of the Professorial Class that was not willing to allow open debate, a free exchange of ideas. They did not want to risk anything of their comfortable lives and even though many did not believe, they complied with the program. No question about the Holocaust, not if it meant damaging or even questioning the orthodox historiography.

They would not do the right thing and Bradley Smith wanted to tell students that this was happening. And he wanted to remind professors about the exceptional opportunity they had by allowing free speech on campus with regard to the Holocaust, allowing students to debate it, even if it meant  hurting the sensibilities of  the ethnic group that had suffered so much under the Nazi regime, for which reason it was promoted everywhere that we owed them not to question one single bit of the Holocaust narrative no matter how insane and impossible at times it might be.

So of course Bradley Smith was called an anti-Semite, a neo-Nazi and all those pretty things they can call you to delegitimize your discourse and portray you instead as a madman who does not know what he is talking about and needs to be blocked from access to the media on campus so his ideas do not contaminate the “holy ground” of the academy.

Bradley’s tactic was to be invasive, the more invasive, the more possibilities he had of creating a story on the campus. And it was damn hard to do it; I know this because I had the misfortune and the privilege to work with this magnificent man on just such a “lost cause” as the campus project could be. He was battling with giants on a regular basis. He was the revisionist gladiator who would be knocked down once just to get up again with another idea on how to get back at this conspiracy between Hillel-ADL on campus that was always dictating editorial decisions in campus newspapers where the battle would usually take place.

Placing a simple ad would stir up an entire campus, and in the good old days even academics would argue that Smith was wrong in his claims, hence many students and professors would be participants in an “Open Debate” on the Holocaust and mainly on free speech with regard the Holocaust question. For a small window of free speech would open and many things would pass through it. Someday it would be very interesting to collect the meaningful things that happened during the years of the Campus Project, as Bradley Smith named his intrusive outreach program.

It was a very frenetic job, impossible to predict the outcome but rewarding because I knew, we knew, that hundreds, perhaps more, of these “empty vessels” as Bradley would call students, would, for a slight moment enjoy at least relative freedom to ask the forbidden questions, to debate among themselves, even to publish opinions in their campus newspapers, yes, the one newspaper they would hardly read was all of a sudden an important medium. Many students would know that many of their professors were censoring the essential information on this historical event; they would learn that they had not experienced until then a free exchange of ideas, the open debate so necessary to untangle the hellish narrative of the orthodox Holocaust, and that free speech no matter how distasteful it can seem to some and free inquiry are essential to academic inquiry yet so condemned when talking about the Holocaust.

For now, I’ll leave it alone…Who if not Bradley Smith could tell us how difficult and challenging was the “Campus Project” when he writes in his book Break His Bones, Confessions of a Holocaust Revisionist,

“Patting myself on the back, I will say that I have asked myself many times why I argue for an open debate on that story and not some other one. After twenty years I am left with the same answer. I don’t know why I started asking, and now I don’t know why I don’t stop. The experience of trying to get academics to be honest about the moral corruption and historical fraud forwarded by the Holocaust Industry has left me isolated, broke, and old. I’m not saying that the experience has been a waste of time. Far from it.”