Five-Story US Holocaust Museum to Open in Washington, DC

President Bill Clinton and other major political figures are expected to attend the formal dedication ceremony of the United States Holocaust Memorial Museum on April 22 in Washington, DC. Journalists and television crews from across the United States and many foreign countries will also be present at the ceremony, which coincides with the 50th anniversary of the Warsaw ghetto uprising.

The Museum – the world’s largest and costliest such memorial – will open to the public on April 26. It was built by the United States Holocaust Memorial Council, a taxpayer-funded federal government agency created by Congress in 1980.

The five-story Museum building is located near the National Mall, 400 yards from the Washington Monument, on land donated by the federal government.

The Museum’s permanent exhibition covers a 40,000-square-foot area spread over three floors. Visitors will start on the fourth floor and descend through the highly emotional exhibit area to the second floor. The peaked roofs on the each of the building’s eight five-story towers are supposed to remind visitors of the watch towers at the Auschwitz camp.

Private citizens and corporations, mostly wealthy Jewish donors, have reportedly pledged about $160 million to cover Museum construction costs. In spite of a well-organized campaign, though, the US Holocaust Memorial Council and its friends in the media have been unable to generate widespread public support for the Museum project, as the Council’s own newsletters make clear.

In 1980, the Congress limited the budget of the US Holocaust Memorial Council to $2.5 million. But Congress has since gone far beyond this, appropriating $33 million above the originally authorized amount.

Last June, the Congress voted an additional $18.3 million in taxpayer money to fund the Council for fiscal year 1993. The Congressional Budget Office estimates that for the fiscal years 1994 to 2000, the Council will receive $15.4 million tax dollars annually (adjusted for inflation). The taxpayer bill for the Holocaust Museum between 1993 and 2000 will easily amount to at least $110 million. (Source: Congressional Record – House, June 16, 1992, pp. H 4742–4744.)

The Holocaust Museum’s operating budget is expected to exceed that of the nearby Air and Space Museum, the most visited museum in the world.

Fundraising requires money, and the US Holocaust Council has been spending lots of it. In 1992 alone, the Council spent $4.3 million on fundraising activity. (Source: USHMC “Annual Report,” January 1992.)

The Museum is certain to be a major focus and tool of the Zionist and Holocaust lobbies. For example, on the second floor visitors will be shown a laudatory, emotional depiction of the founding of Israel (but nothing about the brutal Zionist dispossession of the native Palestinian Arabs).

Members of the US Holocaust Memorial Council, appointed by the President, include such notable apologists for Israel as former US congressman Stephen Solarz, US Senator Howard Metzenbaum, Abraham H. Foxman (national director of the Anti-Defamation League of B’nai B’rith), and Elie Wiesel. 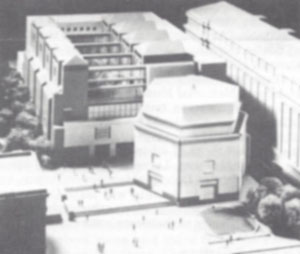 Model of the US Holocaust Memorial Museum, which opens in April in Washington, DC. In the foreground is the six-sided “Hall of Remembrance.”

Underscoring the importance of the Museum for international Zionist interests, the World Jewish Congress (WJC) recently urged Pope Paul II to participate in the Museum’s opening. WJC general secretary Rabbi Israel Singer met at the Vatican with the Pope on November 12.

The Pope expressed his appreciation for the invitation, but made no commitment, WJC president Edgar Bronfman told journalists in early December. “Certainly the whole Jewish world and, I’m sure, most of the rest of the world, would be very pleased if he could see his way through to doing that,” commented Bronfman.

(By the way, just who authorized the World Jewish Congress to intervene in this way?)

As public opinion polls reflect, most Americans resent having tens of millions of their tax dollars spent on special-interest projects such as this Museum, particularly at a time of astronomical budget deficits.

The US Holocaust Museum is additionally inappropriate because it will “memorialize” non-Americans persecuted by other non-Americans. If any new memorial in the nation’s capital is really justifiable, it might more appropriately be dedicated to the memory of dead American Indians or black slaves. Even an official US Museum dedicated to the victims of Communism would be more justifiable. (As historians acknowledge, the victims of Soviet dictator Stalin alone vastly outnumber those of Hitler.)

In a fundraising letter mailed out by the US Holocaust Memorial Museum in 1991 and targeted to Jewish Americans, national campaign chairman Miles Lerman promised that the Museum “will not shrink from showing the failure of American leaders and those of other nations to act” to save Jews. The Museum, Lerman went on, will insure that “Children in Dubuque, families in Tucson, and school teachers in Atlanta will learn the history and the lessons of Auschwitz as thoroughly as they learn the history of their own communities.”

Pointing up its pseudo-religious and emotional character, the Museum’s foundation was laid over earth mixed with soil brought from the sites of Auschwitz, Bergen-Belsen and other former German concentration camps. The Museum’s hexagonally shaped, 60-foot-high, sky-lit “Hall of Remembrance” includes a chapel where visitors will be encouraged to pray and light candles.

It is becoming clear to more and more Americans that the campaign that Jewish American historian Alfred Lilienthal has very appropriately called “Holocaustomania” has terribly skewed our nation’s sense of priorities. Today the Holocaust story is widely regarded as more sacred than the traditional religious faith of the great majority of Americans. Politicians and cultural watchdogs seem to regard vilification of Anne Frank, for example, as a greater outrage than a desecration of the Virgin Mary.

Holocaust Revisionism’s impact on the genesis of this Museum was confirmed in an article in Regardie’s, an influential Washington, DC, business magazine. Writing in the November 1988 issue, Robert Greenberger reported:

The impetus to build a Holocaust memorial emerged from that peculiar combination of idealism and political expediency that’s the hallmark of American government. In 1977 Stuart Eizenstat, President Jimmy Carter’s top domestic adviser, asked a member of his staff to study the feasibility of erecting a Holocaust memorial in Washington. Eizenstat, who is Jewish, says he was prompted by the growing audience for certain revisionist historians who were questioning whether the slaughter of European Jewry had actually occurred.

Concerned Americans, including some Revisionist activists, plan to express their opposition to the Museum at a demonstration in Washington, DC, on the occasion of the April 22 dedication ceremony. The IHR also intends to mark this day with an appropriate response of its own.

Nothing better illustrates the triumph of expediency over principle in our nation’s political and cultural life than this Museum. It will ultimately be remembered, not so much as a memorial to six million Holocaust victims, but rather as a costly and rather tacky monument to the enormous influence and power of the small minority group that pushed for it, and of the moral cowardice or venal indifference of the Senators and Congressional representatives who sanctioned it and appropriated the people’s money to finance it.