Fred A. Leuchter, Jr., the American execution hardware specialist who insists that claims of wartime mass gassings at Auschwitz are not true, was arrested in Cologne, Germany, on October 28, half an hour before his scheduled appearance on a television show. 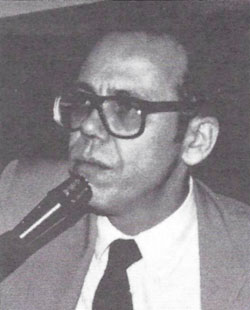 Leuchter was arrested without an arrest warrant or formal charges. He was then taken to Mannheim, leaving his wife, Carolyn, behind in Cologne. Neither speaks German.

Only the next day was Leuchter formally charged. Cited in the criminal charge were statements he had made during a speech at a meeting in Germany in November 1991, in which he spoke about his 1988 on-site forensic examination of the alleged execution gas chambers at Auschwitz, Birkenau and Majdanek. These facilities were not used, and could not have been used, to kill people as alleged, said Leuchter, a recognized specialist of gas chambers used to execute convicted criminals in the United States.

Leuchter had been scheduled to appear on the show “Schreinemakers Live” of the private television network SAT-1. He was invited to appear as an execution expert, the show’s host, Margarethe Schreinemakers, confirmed. His travel costs and hotel expenses had been paid in advance by the station.

Schreinemakers said she had no idea that Leuchter was wanted by the police, and was flabbergasted when they “stormed” her Cologne studio shortly minutes before airtime. “I do not support this thoughtless act of censorship, which now makes Leuchter a dubious heroic figure,” she commented. “With this Blitzaktion, the authorities have managed to make Leuchter a martyr of the neo-Nazis.”

Confirming the political motive of the arrest, a police official declared that “it was decided on the political level that a television appearance by Leuchter would harm Germany’s image in foreign countries.” (Kölnische Rundschau, Oct. 30.)

Leuchter was formally charged by the Mannheim prosecuting attorney’s office with “incitement to hatred,” and “defamation of the memory of the [Jewish] dead.” If convicted, Leuchter could face a sentence of up to five years imprisonment.

In recent years a number of individuals who publicly reject claims about wartime mass killings of Jews have been arrested and convicted in Germany on these charges. Best-selling British historian David Irving, for example, was convicted in 1992 on a charge of “defaming the memory of the dead,” for public statements rejecting stories of mass extermination of Jews in gas chambers at Auschwitz as a myth. (For more on this case, see the July–August 1992 IHR Newsletter, p. 3.)

Bail has been denied Leuchter, and eight days after his arrest he was still being held under “investigative custody” in a Mannheim jail cell.

The Institute for Historical Review has written to the US ambassador in Germany “to express our profound concern over this situation, and to strongly urge you to take every legally permissible action on behalf of this American citizen.” The letter concludes:

This case is particularly important because, according to newspaper reports, Mr. Leuchter has been arrested for actions that are not criminal in the United States. He was arrested for expressing views that, in our country, are protected by the Constitution. This can therefore be regarded as a free speech case, and Mr. Leuchter consequently has something of the status of a political prisoner.

The decision to arrest Leuchter is an apparent expression of panic on the part of the German authorities, and will likely prove to be a major mistake for them. A formal court hearing is now all but inevitable, which will force a public airing of the Holocaust issue, and of the iconoclastic findings of Leuchter and other specialists.

Reports about the arrest – many of them unfortunately biased, sensationalized and inaccurate – have appeared in dozens of German daily papers.

Leuchter, a resident of Malden, Massachusetts, addressed the IHR conferences of 1989, 1990, and 1992. The Holocaust lobby has responded to Leuchter’s findings, which have been widely circulated as The Leuchter Report, with a campaign of slander, pressure and intimidation. As a result of this campaign, Leuchter’s career as an execution hardware specialist has been destroyed. (For more about Leuchter, his career, and the campaign against him, see the Winter 1992–93 Journal.)