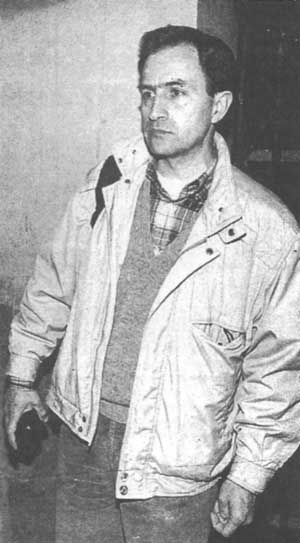 Pedro Varela in the aftermath of the attack on the Europa bookstore, January 16, 1999.

In a victory for free speech in Europe, a high court in Spain has suspended a lower court conviction of a Barcelona book dealer for distributing publications that dispute Holocaust extermination claims.

On November 16, 1998, a Barcelona criminal court declared Pedro Varela guilty of inciting racial hatred and of denying or justifying genocide, and sentenced him to five years imprisonment and a fine of 720,000 pesetas (about $5,000).

On April 30, 1999, the Spanish press announced that the provincial court of Catalonia had voted to suspend Varela’s conviction. The three judges of the Audencia court in Barcelona unanimously declared that the law under which he had been convicted may violate Article 20 of the Spanish Constitution, which guarantees the rights of free speech and free expression of opinion. Public skepticism about Holocaust claims, the three judges agreed, is constitutionally protected expressions of free speech.

The case now goes to the Constitutional Tribunal in Madrid. In the meantime, Pedro Varela’s conviction is suspended, and he is free.

Spain’s 1995 “anti-genocide” and “anti-discrimination” law (Penal Code Section 607.2) makes it a crime to express “ideas or doctrines that promote the crime [of genocide], [or] exalt its author,” or to “deny, trivialize, or justify” genocidal actions. It goes on to make it a crime to “attempt to rehabilitate or establish a regime or institution that aids practices that generate the crime of genocide.”

Pedro Varela is the only person to be tried and convicted in Spain for “Holocaust denial.” His November 1998 conviction also effectively created a new class of “politically” forbidden books in that country. (See: “Spanish Court Sentences ‘Thought Criminal’,” Nov.-Dec. 1998 Journal, pp. 21-23.)

So far the local police has not returned the 20,000 books it seized from Varela’s book store during a raid on December 12, 1996. If Varela’s conviction is upheld, the books will be destroyed.

Britain’s Searchlight magazine, which calls itself an “international anti-fascist monthly,” dealt with Pedro Varela and his conviction in a lengthy, front-cover article (Jan. 1999). “At long last,” it gloated, “the forces of law and order have caught up” with Varela. It went on to stress his “neo-Nazi” past and his “international” connections, which allegedly included “close links between Varela’s shop with the Institute for Historical Review in the USA, arguably the world’s most important and dangerous coordinating centre of historical revisionism.” (In fact, these “close links” consisted simply of wholesale purchases of IHR books, which were then re-sold by the Europa book store.) 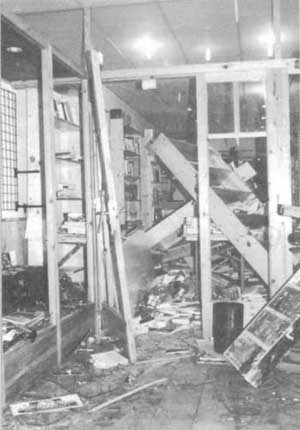 This picture, taken in the aftermath of the January 16 attack on the Europa bookstore, shows some of the havoc wrought by the "anti-fascist" mob. Demolishing everything they could lay their hands on, the thugs smashed windows, tore down book shelves, and destroyed books.

Not content with the 1996 seizure of 20,000 books, and the November 1998 sentencing of Varela, more than 500 “anti-fascists” rallied on January 16, 1999, in front of the Europa book store on Barcelona’s Séneca street to vent their rage and hatred.

Some of the protestors stormed the shop, smashing protective metal shutters and doors. The political terrorists broke windows, tore down book shelves, and destroyed office furniture and equipment. They gathered up several hundred books, as well some video cassettes, which they heaped into a large pile and set on fire.

Although the police were promptly and repeatedly called, they gave no help against the violent attack. Instead, they stood by passively. As if by order, they did nothing to stop the destruction.

In the aftermath of the attack, Varela commented:

A group of friends is trying, at great personal sacrifice, to rebuild the Europa book store. But the damage is very extensive – about three million pesetas worth. In addition to the doors and the equipment, many books were destroyed, and others are no longer suitable for sale.

Pointing up the prevailing double standard in the media, the bigoted attack on Varela’s book store received no attention in US newspapers, and only limited coverage in the Spanish press. A comparable attack by “neo-Nazis” would almost certainly have prompted news coverage in the American press, as well as indignant editorial commentary.

This attack recalls the July 4, 1984, fire-bombing of the offices and warehouse of the Institute for Historical Review in southern California. That devastating arson attack caused an estimated $400,000 in damages.

In spite of his ordeal, Pedro Varela remains defiant and determined. He says:

When the authorities are not able to subdue those who think differently, they let loose terrorists and their accomplices. And behind all this are fanatics of the dictatorship of thought coordination, enthusiasts for democracy who have contempt for those who think differently, representatives of the anti-racism business, and supporters of reverse racism. These are people of the character of Danton, Marat or Robespierre, who, in the name of progress, humanity, freedom and tolerance, are ready to order the burning of books, to close or destroy book stores, and to lock up the innocent.

Evil can only be fought with good. We have said that we fight lies with the truth. And so it shall be. If those people, whose views have been brought into doubt by so many authors, really had reason on their side, they would permit skeptical questioning, respond with patience, and not try to hide their documents and their “proofs.” But when they are caught in their lies, they call the judges, hide behind the authorities and use the media, all to criminalize any form of opposition. In acting this way, they show themselves for what they are.

Truth is always calm and composed. Lies, though – as a priest who is friendly to us puts it – demand secular recognition.

(Pedro Varela can be reached by mail at Librería Europa, Aptdo. de Correos 9169, Barcelona 08080, Spain, and by e-mail at [email protected]) 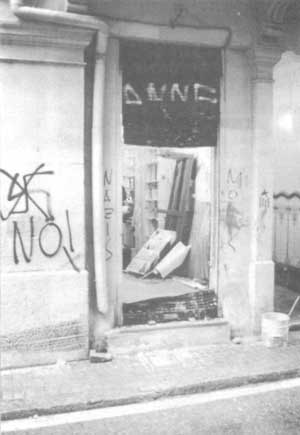 In their assault on the Europa bookstore on Barcelona's Seneca street, the "anti-fascist" thugs broke through the roll-down steel covering that protected the front door. This photo was taken in the aftermath of the January 16 attack.

Over several decades a tremendous worldwide media and socio-political campaign has made “the Holocaust” a mighty icon of our culture. As a result, in the United States and in much of Europe, anyone who publicly questions the familiar “Six Million” extermination story can expect public scorn and social ostracism.

In the US, for example, Jewish pressure (1990-93) destroyed the career of execution hardware specialist Fred Leuchter because he had concluded, on the basis of a detailed forensic examination of the alleged gas chambers of Auschwitz, Birkenau and Majdanek, that these facilities were never used to kill people as claimed. (See the Winter 1992-93 Journal, pp. 421-444, 485-492.) And in Japan, Jewish pressure in 1995 forced one of the country’s largest publishing companies to shut down the large-circulation Marco Polo magazine because it had carried an article disputing claims of mass killings in gas chambers at Auschwitz. (See “‘No Gas Chambers’ Says Influential Japanese Magazine,” March-April 1995 Journal, pp. 2-9.)

Not content with that, Jewish-Zionist groups have waged a international campaign to criminalize public expressions of doubt about Holocaust claims. In 1982 the Institute for Jewish Affairs in London, an agency of the World Jewish Congress, announced an effort to persuade governments to outlaw “Holocaust denial” (Jewish Chronicle [London], April 23, 1982). The anti-revisionist “thought crime” laws that were subsequently introduced in several countries reflect the success of this initiative. Today it is illegal in Israel and in about half the countries of Europe, including Germany, France, Spain, Switzerland, the Netherlands, Poland, and Austria, to dispute Holocaust claims.

But this campaign has not always been successful. A plan by the British Labour Party to introduce “Holocaust denial” legislation in the UK was quietly abandoned – for the time being anyway – after it came under considerable public criticism.

In most of the world, including such major countries as the United States, Russia, China, India, Indonesia, Brazil, Japan, and Argentina, people are still free publicly to express doubts about the “Six Million” story. Even in Europe, Holocaust skepticism remains legal in Italy, Sweden, Denmark, Norway, Ukraine, Britain, Ireland, and Croatia.

Pedro Varela has won an important victory in the on-going worldwide struggle for free thought and expression. Together with his attorneys and supporters, he has persuaded a high court in Spain publicly to acknowledge the obvious: “Holocaust denial” laws violate traditional Western standards of free speech.

"Is there any man or woman – let me say, is there any child – who does not know that the seed of war in the modern world is industrial and commercial rivalry?"
— President Woodrow Wilson, Sept. 5, 1919.

"The power of a great man lies neither in the physical nor moral qualities of he who possesses it. It must be looked for elsewhere. The power is the collective will of the people transferred by expressed or tacit consent to their chosen leader."
— Tolstoy, War and Peace