More than just a "former communist," Garaudy had for many years, been “the” ideological muscleman of the French Communist Party, as well as a high-profile political thinker and social activist in the national life of France.

The underscored reference to Garaudy's "conversion" to Holocaust revisionism in Le Monde's headline was an added touch of irony and double-entendre aimed at the more informed French reader, who might have recalled the old communist's somewhat bombastic 1982 conversion to Islam.

Chombeau has described Garaudy's more recent ideological colors in these terms: "Anti-Zionist, anti-Israeli, anti-capitalist, Muslim." Also accused of being anti-Semitic, Garaudy has insisted that for him "Judaism is not the issue, but Israeli policies are" ["Le judaisme n'est pas mis en cause, mais la politique israélienne"]. Still, allegations of anti-Semitism against Garaudy surfaced again this past winter.

Titled, "The Founding Myths of Israeli Politics" [Les Mythes fondateurs de la politique israélienne], Garaudy's essay unabashedly kicked over three mouldering pillars of the orthodox version of the Holocaust story: namely, the Hitler order to exterminate the Jews of Europe, the existence of the homicidal gas chambers, and the very "genocide" itself.

At issue was a long essay Garaudy had written boldly challenging the traditional version of the Holocaust story. Published in the Winter 1995 edition of the journal La Vieille Taupe, the content shocked and dismayed many of Garaudy's old comrades on the Left. In it, the 82-year-old philosopher and communist-turned-Muslim defended and promulgated the views of Holocaust revisionists, most notably (reports Chombeau) those of the controversial British historian, David Irving, whose Goebbels biography was given a last-minute heave-ho by its publisher, St. Martin's Press, earlier this April. 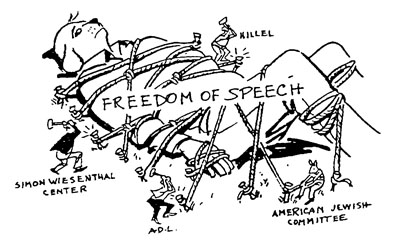 Needless to say, negative reactions to the Garaudy essay by the French media were not confined to the pages of Le Monde. Le Canard enchainé: "With Roger Garaudy, one can expect anything." La Croix: "The suicidal shipwreck of a man who might have been the eyewitness to an entire epoch." Libération: "Garaudy has joined the ranks of the anti-Semites." And so it went.

Since 1990, it has been illegal in France for anyone to contest any aspect of the Holocaust story. Those who have, like Prof. Robert Faurisson and others, have been summoned before the courts and duly charged with hate-mongering and racial defamation.

The same has happened to Roger Garaudy, notwithstanding his status as an old and cherished icon of the Left. Along with Pierre Guillaume, the publisher of La Vieille Taupe, Garaudy will appear in a Parisian court on April 25th and face the charges of hate-mongering and racial defamation leveled at him by a couple of survivors' associations; meanwhile, the anti-racist MRAP [Mouvement contre le racisme et pour l'amitié entre les peuples] has been threatening Garaudy with a similar legal action.

As Gitta Sereny noted in the course of the Faurisson trials 15 years ago, an interesting feature about Holocaust revisionism in France has been its appeal to French intellectuals of both the Right and the Left. Garaudy himself, in the midst of the uproar that attended the publication of his controversial piece, triumphantly alluded to its ecumenical spirit:

"Already, joining with me in my struggle for the truth are friends from the Catholic Institute, as well as the Communist Party" [ "Déjà, venant de l'lnstitut catholique comme du Parti communiste, me rejoignent des compagnons dans la lutte pour la vérité"]. In the case of Messrs. Garaudy and Guillame, it is a pair of dedicated Leftist thinkers who will be called to answer criminal charges for their temerity in having embraced and espoused certain revisionist notions vis à vis the Holocaust.

(We have the Christine Chombeau article on Garaudy, L'ancien communiste Roger Garaudy se convertit au revisionnisme – send us a SASE.)