In August 1987, a professor of economics at Jean Moulin University in Lyon expressed, in passing in a scholarly article published in an economics journal, skepticism about claims of wartime mass killings of Jews in gas chambers and, in a footnote, mentioned a Revisionist book by Serge Thion and Robert Faurisson.

As a result of these few lines, Bernard Notin soon became a victim of an intense three-year campaign of persecution, threats and intimidation.

The same Jewish-Zionist organizations that had targeted French Revisionist scholar Dr. Robert Faurisson in 1978–79 at another university in Lyon launched a vehement campaign against Notin and his university, which was described as a nest of snakes and Nazis.

For a time the University defended Notin’s right to teach, pointing out that he had never said anything about gas chambers, the Holocaust or Holocaust Revisionism in any of his lectures. However, after intense pressure (including financial pressure) was brought against the University for this stand, it abandoned Notin.

Banned from teaching for three years, he was transferred to work – at a reduced salary – as a kind of archivist. A lawsuit was also successfully brought against him for his 1987 article, and he was fined 25,000 francs (about $4,500).

In 1988, Notin’s wife found their family dog stabbed. In spite of its severe wounds, it was saved. A few weeks later, their family cat was found stabbed to death. Notin (who is 42), and his wife have five children, aged four and a half to ten. They are all dependent on his income.

In January 1993, University authorities decided to quietly permit Notin to resume teaching. This move might have succeeded if it were not for a new campaign against him by the French daily newspapers Le Monde and Libération.

On January 30, a mob of about 50 Jewish students carrying a Star of David confronted Notin on the first day of his economic forecasting class, physically preventing him from entering the classroom and forcing cancellation of his class.

Instead of disbanding the violent group, which Notin called “the forces of hysteria,” school administrators gave in and decided to cancel the lecture. New threats were made against his wife and children, and the Jewish Student’s Association (Union des étudiants juifs de France) issued a statement demanding that he be barred from ever teaching.

Unable to withstand any more such pressure and intimidation, Notin decided to recant. In a February 3 statement issued to the media, he declared that there was a wartime genocide against the Jews, and that Jews were killed in gas chambers. He criticized Holocaust Revisionism and begged the pardon of those he might have offended. 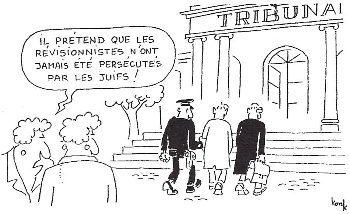 “He claims that the Revisionists have never been persecuted by the Jews!” French cartoonist “Konk” subtly comments on the legal persecution of Revisionism in his country.

For three years, comments Dr. Robert Faurisson, Notin behaved with great courage while he and his family suffered terribly. But the tension in France is now so high that he was obliged to abjure his “heretical” views. He is courageous, but not heroic. No one has the right to criticize him.

In Lyon, comments Faurisson, “law is made and decided by the Jewish organizations, and especially by their leader, Doctor Marc Aron, a cardiologist and president of the European section of the World Jewish Congress.”

The most terrible aspect of this entire affair, Faurisson believes, “is that in the whole of France and in spite of Jewish violence against Notin shown on television and reported in all the newspapers, not a single intellectual, not a single professor, dared to protest.”