Even as independent thinking is being suppressed in “politically correct” America, and erased in today’s national-masochist Germany, happily some remnants of traditional Gallic nonconformism are still alive in France. If a Frenchman asks you the rhetorical question “Do you think I am a fool?,” it means he is irritated by your naive assumption that he may be naive.

Roger Garaudy obviously does not want to be taken for a fool. In admirably scholarly fashion, fortified with an impressive bibliography and endless source citations, he (possibly with help from anonymous assistants) has delivered a powerful blow to the greatest historical-political myth of our time: the transcendent victimology of Jews for the benefit of Israel. For financial gain, as an alibi for indefensible policies, and for other reasons, Jews have used what Garaudy calls “theological myths” to arrogate for themselves a “right of theological divine chosenness.” He is right on target, although readers familiar with the work of other revisionist scholars will recognize many of the arguments presented in this well researched and very readable work.

Referring to the myth of “antifascist Zionism,” Garaudy for example cites the secret collaboration of prominent Jews with the young Nazi regime, and the 1941 offer by some Zionists, including Israel’s future prime minister Yitzhak Shamir, to join with Hitler’s Germany in a military alliance against Britain. [See: M. Weber, “Zionism and the Third Reich,” July–August 1993 Journal.] The farce of the Nuremberg victors’ show trial is also well documented by Garaudy, who cites German, Israeli, Soviet and American sources, including the memoir of chief US prosecutor Robert Jackson.

Garaudy examines the deceitful ex nihilo establishment of the Jewish state through the dispossession and mass expulsion of Palestine’s Arabs, and debunks the legend of the “Israeli miracle.” He writes frankly of the powerful Zionist lobby in North America, which effectively controls US policy regarding Israel and plays a critical role in shaping public opinion.

“Founding Myths” offers hundreds of interesting quotations, often by prominent Jewish scholars. For example, it quotes Jewish scholar Michael Bar-Zohar, who points out that during the Second World War “the rescuing of European Jewry was not first on the list of priorities of the ruling class. The foundation of the [Jewish] state was primary ...”

Taking on that most sacred of sacred cows, Garaudy writes that the Holocaust story, as a whole, is a “myth.” The wartime suffering of Europe’s Jews, he contends, has been elevated to the status of a secular religion, and is now treated with sacrosanct historical uniqueness.

Tracing the origin of the notorious term “final solution” (“Endlösung”), Garaudy shows the circumstances in which the German leaders employed it. The phrase first appeared in a letter by Heydrich of June 24, 1940 (after the German victory over France). He wrote of “a territorial final solution” (“eine territoriale Endlösung”), referring to a proposal to deport Europe’s Jews to Madagascar that was widely and seriously discussed at the time in German circles.

“There is no document signed by Hitler, Himmler or Heydrich speaking about the extermination of Jews,” Garaudy points out. He also deftly tears down mythical exterminationist mathematics (such as the exaggerated Auschwitz body count), and debunks stories of gassing of Jews. Claude Lanzmann’s much-praised “Shoah” film he dismisses as “an endless turkey,” and refers to Anne Frank’s diary as part of the “Shoah business.” 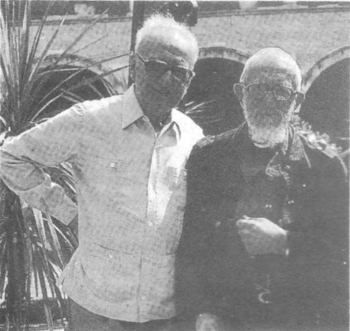 If one accepts the old saying that everyone scratches himself where it itches most, then the furious attacks against this book and its author show that many in France are itching badly.

The country’s supposedly independent press, from Le Figaro to Le Monde to Libération, along with the main television channels, immediately went after Garaudy in an intense smear campaign. Although France’s media traditionally prides itself on its independent, freewheeling spirit, it has displayed a patent bias in heaping scorn on Garaudy and his most prominent public supporter, Abbé Pierre. Each is loudly accused of the worst of all possible sins in today’s France: “inveterate anti-Semitism,” “denial,” and “revisionism.”

Along with the media smears, lawsuits have been brought against Garaudy and his publisher. Each may also be subject to heavy fines or even imprisonment for violating France’s 1990 Fabius-Gayssot anti-revisionist law. One cannot rule out that the octogenarian Garaudy will end his days in jail as a notorious thought criminal.

The entire Garaudy affair has received enormous attention in French academic, journalistic and public life, and shows no signs of dying. But in spite of all the media howling, “Founding Myths” is selling well.

If Garaudy were a right-winger or a neo-Nazi, he would have been dismissed long ago as lacking any intellectual credibility. But his establishment credentials are impeccable. During the war, he was one of the first to join the French anti-fascist Résistance, and he later played a prominent role in the French Communist Party. Later, after breaking with the Party, he converted to Islam. Garaudy’s most prominent supporter and friend of many years, Abbé Pierre, is a world-renowned Catholic priest who likewise worked in the anti-German Résistance. Since the war he has devoted himself to helping the poor. Moreover, “Founding Myths” was published by the leftist writer Pierre Guillaume under the imprint of his “Old Mole” firm, a small and relatively unknown publisher that has brought out works of Holocaust revisionism, including some by Robert Faurisson.

Citing the leftist credentials of this book’s author and publisher, many French opinion makers have been railing about the looming danger of a “red-brown” (Communist-Nazi) alliance. As silly as it is, such talk points up the complete bankruptcy of the traditional “left-right” categories of intellectual and political life. The Garaudy affair shows that the significant contending political and intellectual groupings today (and not just in France) are not “leftists” and “rightists,” but rather the “politically correct” or “taboo-affirming,” and the “politically incorrect” or “taboo-defying.”

“The most effective indictment against Hitlerism,” Garaudy writes in the final words of his book, “is the establishment of historical truth. It is for this purpose that we have wished to make our contribution with this dossier.”

In France the century was ushered in with an intense public debate over a Jewish army officer who had been accused of selling military secrets to Germany. For a time the Dreyfus affair sharply divided French society into radically hostile intellectual and political camps, a split that portended the country’s division during the Second World War. As we approach a new century, it cannot be ruled out that the Garaudy case and historical revisionism will similarly split French public life, but in an ultimately even more profound way.