From Athens to Auschwitz

Are our readers ready to look into yet another testimony? Sit back and relax. Tonight’s guest of honor is Errikos Sevillias. So let’s go. 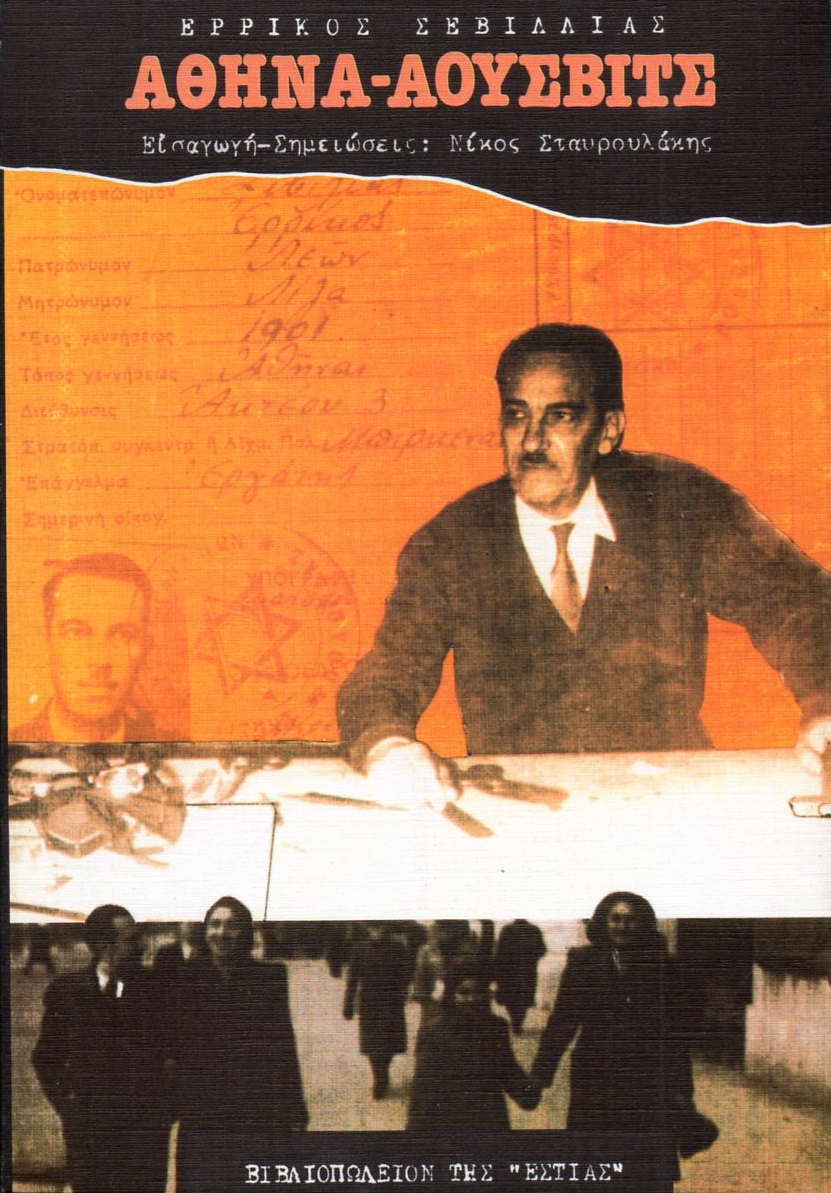 Sevillias was deported from Athens to Auschwitz and then Birkenau in 1944 at the age of 43. His memoir Athens-Auschwitz was published first in English in 1983 (Lycabettus Press, Athens) and then in Greek in 1995 (Αθήνα - Άουσβιτς, Vivliopōleion tēs “Hestias,” Athens). His account is generally believable. Simple, clear, and with no verbalisms. After his stay in Birkenau, he was transferred to Breslau which proved to be much worse as he had to work at night shifts in the freezing cold. He suffered severely from hunger, frostbites and lice, as there were no cleaning measures (in Birkenau he received clean clothes every week). Upon liberation, he was 32 kg and at the brink of death. He slowly recovered and returned to Greece. So let’s see what he has to say about the extermination claims.

On his second day in Auschwitz he asked another prisoner about the selection he had went through the previous day:

“After I ate, I went out with my son-in-law to find out what happened to the others who had come with us and I asked one of the Greeks who had been there for a long time. I said to him, ‘You, as a long-term inmate, should know where they sent the others who had come with us.’ He laughed bitterly and told me: ‘If you wish to know, look there, that big chimney with the big flame. They all went there, the old, the sick and the mothers with the children.’ I could not understand a thing, new as I was. And he told me, ‘There are the crematories, that is the place where they kill and then burn whoever is unfit for work. And they send all the mothers who have little children.’ When I heard it, I froze out of horror and started crying painfully for my little nephew who had gone with them.” (p. 60)

Once again we see the rumor factory at work. From one prisoner to the next, everyone repeated what they had heard. So Sevillias, for the rest of his internment, every time he witnessed a selection he thought that those selected had been sent to the crematory. 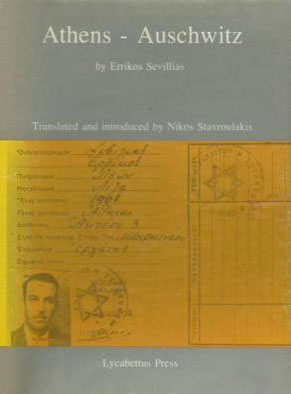 Sevillias has no personal experience with gas chambers. His information is derived from his son-in-law who supposedly worked at Crematorium II or III. Here is his description:

“Every day they killed thousands of people. When they were bringing them into the crematorium, they put them in a large underground room that had numbered hangers on the walls, and they said to them: ‘Now you have to take off your clothes, and each of you place it on a hanger remembering the number, so you can find them when you exit the shower.’ They were telling them this so that they would not suspect what awaited them, but they were all shaking from fear. When they had undressed, a door opened leading to another room – about 8 x 8 meters – and they ordered them to go in. When the first ones entered and saw that there were no showers but merely four empty walls, they realized that their time had come, and they started crying and shouting. The rest, hearing the cries, would not enter, they resisted. Then the Germans beat them mercilessly with a whip, and they had to go in. But as there were too many and they could not all fit inside, they squeezed them to the point that they had to raise their arms up to fit inside; that is because they were always more than a thousand persons, and it was almost impossible to fit them in. In the end, they grabbed the little kids left and threw them above the heads of the adults. When everyone was finally inside, they sealed the door and channeled a poisonous gas into the room, that killed them within three minutes.” (p. 79)

Not only has he no idea what kind of gas they used or how, but his description of the gas chamber is totally wrong. The room in question was actually 30 × 7 meters in size, with seven concrete pillars, and according to official history, four wire-mesh columns as well as fake shower heads. Therefore, whoever provided him with this information had never set foot in that basement and wasn’t familiar with the mainstream narrative either.

Now here’s the description of the cremation ovens:

“They were not any different than the usual furnaces, only they were much larger, they were about 80 meters in length, and in every two meters there was an opening. In front of each opening there was a worker; he took the bodies left by the little rail cars as they passed by and threw them in the furnace. This went on until they were none left. Within two hours more than a thousand people had been killed and thrown into the furnaces, and the gas room was ready for new victims, and then more and more. Sometimes the four crematories operated day and night, because ten or fifteen thousand people happened to arrive a day, who all had to be executed.” (p. 80)

Furnaces 80 meters long? An opening every two meters? Little rail cars passing by? Throwing corpses into furnaces? The furnace room of the largest crematoria in Auschwitz, nos. II and III, was 30 meters long. It was equipped with five furnaces that were 3.5 m wide each with three openings whose center was some 1.2 m apart. No carts were running on rails or otherwise to deliver the corpses, because that room was on the ground floor, while the alleged gas chamber was in the basement. They were linked only by a freight elevator.[1] Furthermore, corpses had to be introduced into the cremation muffle through the 60-cm narrow and even lower opening using a steel stretcher. They could not have been “thrown.” It is therefore evident that the informant had never even been near any of the Birkenau crematoria. And here’s the most interesting “information”:

“When the corpses they had put in the furnaces were completely burnt, the fat from them was sent through pipes in a pit behind the furnace. From there they were put into barrels and taken to cars. Where they went and what they did with it, I did not know.” (p. 81)

In the presence of a spark or flame, body fat catches fire at temperatures exceeding 184°C (its flash point).[2] Considering that the inside of a cremation muffle needs to be at least 800°C hot to function properly, there is no way any fat could have oozed from a body lying in a cremation muffle, let alone drip off, without instantly catching fire and burning off quickly.

Finally, Sevillias offers some interesting information regarding the alleged Sonderkommando revolt (which he places on October 6). According to the orthodox narrative,[3] on October 7, 1944, 300 members of the Sonderkommando in Birkenau slated to be put on a transport – which they thought was equivalent to their impending execution – planned a mass escape. This plan, however, was betrayed by another inmate, so a premature, spontaneous revolt broke out instead, during which Sonderkommando members at Crematorium IV attacked their SS guards with hammers, axes and stones. They set Crematorium IV ablaze and threw a few self-made grenades at the arriving SS reinforcement. The Sonderkommando members of Crematorium II joined the uprising, while the crews of the other crematoria remained inactive. Some of the insurgents managed to reach the grove behind Crematorium IV, where most of them were killed in the ensuing fight against SS guards. A few escaped, but most of them were later captured. Three SS men were killed in this revolt.

About this event, Sevillias writes that on October 5 his son-in-law told him that they would attempt a mass escape “tomorrow afternoon.” Here’s what followed:

“On October 6, I went as usual to work, and at some point, when I saw him through the wires, he told me that everything was fine. When noon had passed, we started waiting anxiously for the signal. We were all nervous, but we had all made up our minds. But at 2 o’clock, as we were working, we heard many cries from the crematorium. This worried me, and in a moment we saw the internal workers coming furiously out with axes in hand, cutting the wires and running away from the crematorium. We were at a loss not knowing what to do, and we stayed there still.” (p. 94)

Then the Germans arrived shooting anyone moving. Many prisoners were killed, and the escape failed. Sevillias learned later that the operation had been betrayed by another prisoner hoping for a reward. When the workers in the crematorium realized this, they grabbed the axes and tried to run away, but the Germans caught up with them.

The above seems to be largely corroborated by a few German wartime documents confirming that this revolt took place, indeed, including a garrison order naming the three SS casualties,[4] and by an escape report of the Gestapo published by the Auschwitz Museum. The hour is exactly the same mentioned by Sevillias, the only difference being the date (September 7),[5] but that seems to be an error of the document, as other German wartime documents put that event firmly on October 7, so for instance the just-mentioned garrison order and a telegram sent by the Auschwitz camp headquarters to the local Gestapo office saying:[6]

“On October 7, [19]44 the Kommandos of the crematoria here attempted a mass escape. Through the swift and decisive intervention of the guard staff here, however, it was possible to prevent this. The vast majority of these prisoners were shot while fleeing. At present the following [4] prisoners are still unaccounted for: […]”

Of course, we cannot expect to find any details of the event in German wartime document, so we will probably never know whether the details of the orthodox narrative as recounted by Czech based on a number of testimonies (such as those by S. Lewenthal, H. Mandelbaum) are correct. But the general framework of the event seems to be firmly established.

This witness can be considered mostly credible with regard to events he personally experienced, as it agrees with solidly documented facts, while unverified rumors he received from others are clearly false, in particular when it comes to the alleged gas chambers and the claimed equipment and operation of the crematoria.

Hence once again, another witness does not offer reliable information about mass killings in gas chambers.