From Israel Supporter to Holocaust Denier

Here is a brief history of the writer. I was born and raised in a very functional, middle-class family in a suburb of Chicago. The family was religious and believed that Jews are God's chosen people. Occasionally I would hear a racial slur, but I would only laugh. I had one Jewish friend out of maybe 20 friends in high school.

I'm 16, a shy kid, but still stood up and asked: “How many people vote for Israel?” Israel raised his hand along with one other person. The conductor said “That's not how we vote in MY orchestra.” I picked up my violin and left that orchestra. Yes, I should have gone so far as refusing to leave third chair, but Goy kids usually do not have the Chutzpah. My violin career was over. Still, I did not put Jew and Jew together to equal foul at that time.

About 1967 I worked for an ex-German/Jew that was a Zeiss rep. Zeiss was a German manufacturer of optical equipment in the U.S. before WWII (the Nazis left a Jew in charge in the U.S.?). Now they had Rich (a Jew who worked for Zeiss) doing business for Brinkmann Instruments on Long Island. In one conversation he told me about how his brother had been killed on the Eastern Front fighting the Russians. He thought Hitler was a great man, but somewhat blamed Hitler for his brother being killed. At the time I wondered: a Jew thinking Hitler was a great man? Not what I've been taught. Not what I believed.

Then, a few years later, I was working at an oil refinery in the San Francisco area where I had an older millwright named Ernie working for me. He told me that he had been at Stalingrad and got out by plane. I was still rather pro-Israel at that time, which would come out in our conversations. One time he calmly told me to read "the other side of the story." Okay. I decided I would read something. The first book I turned to, maybe because Ernie had been there, was War on the Eastern Front by James Lucas. It opened my eyes. I had to read more. And that was the beginning.

Then my best friend, after I moved to Washington State, told me he had shaken Hitler's hand in 1945. Adolf Hitler going around to schools in the Berlin Area during the massive Allied bombardments? This Monster shaking children's hands at schools? Again, not what I had been taught.

This friend also gave me information for Ernst Zündel and Bradley Smith. Wow, more information. I phoned them both and they were extremely cooperative to help me learn. Ernst started sending me 29-minute tapes for the local cable station, which I signed up for immediately, and Bradley sent me a few brochures. Now I pass out brochures every Friday on Portland’s busiest intersection, but only to people who ask for them.

In 1995 I was picketing the Pope in NYC when I met an older man dressed in a prison uniform with the number “88” on it. His story was that he had been a Sonderkommando at Auschwitz. I did not let him know that I now questioned details of the Holocaust and was showing Zündel’s 29-minute videotapes on the local cable channel. Sigmund told me how he would watch through the glass window in the gas chamber at Auschwitz and when all the people had fallen dead he would open the door and pull out the bodies. If anyone was still alive he would call the Nazi guard to shoot them. No remorse or tears with the story either. Sigmund is on the internet as of April 2014 with his lies.

It did cost me the price of a great dinner to hear all these lies, but it proved to me people like Ernst Zündel and Fred Leuchter are heroes. Sigmund was being paid by some Catholic/Jewish organization in Edmonton, Canada to visit and lie. I went to Sigmund Sobolewski's website a few months ago and thanked him for making it so obvious to me he was lying and that the gas chambers are a Zionist hoax. I never got a reply. Check it out here: http://tinyurl.com/mozvtkz 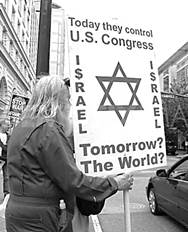 About five years ago I was scheduled to debate another Auschwitz survivor on cable access TV in Portland and invited Bradley Smith up for support. Bradley came up but Weiner changed his mind. He said it would be "too much of a strain" and refused (probably due to Bradley's appearance). Bradley did debate a local Jewish man from the Humanist group I belonged to. A real gentleman that the TV sponsor (Dk. Don) was able to acquire at the last minute. The show was a success, even though the Jewish man was not versed in why open debate in the media was not allowed. Since then he has stopped and talked with me at Pioneer Square and confides that open debate should be allowed. The TV sponsor, Dk. Don, has become decidedly anti-Israel since Bradley's appearance. On the negative, I was “drummed out” of my “Humanist” group by members who are Goys. The Jews in the group supported me.

Perhaps if our Open Debate was brought into the "lay" level with the Jews, there would be more understanding. While I am demonstrating on Pioneer Square on Fridays Jews approach me because of my provocative sign saying "Today they control the U.S. Congress," the Star of David in the center, and "Tomorrow? The World?" I would say that some 20 percent of the Jews (they tell me they're Jewish) compliment me on the idea that my sign represents.

My emphasis on our quest has changed to how the I$rael/ Zionist/U.S propaganda system teaches us Hate. Hate Communist Hugo Chavez, hate the Nazi Hitler, hate North Korea, hate Castro, hate Cuba, they are all things to hate. My quest is to get the people of Portland (and the world) to read beyond the propaganda of the U.S. Government, Hollywood, and our I$raeli-controlled media. There is another side, and sometimes many more sides, to all these issues. Whether it's about Nazis or Communists, Hollywood has its agenda. My agenda is truth.