A document, long known and long sought by revisionists, was published in a brochure by a Holocaust memorial group in Germany in preparation to a public exhibition shortly before David Irving was arrested and imprisoned in Austria.  The document clearly supports the contention, made by Arthur Butz, and several others, including David Irving, that the basement morgue of a crematorium at Auschwitz was intended to serve as a gastight bomb shelter.

The document was made available in a brochure in 2005 prepared for an exhibition on Topf & Sons in Germany, within the context of a Holocaust memorial exhibition at the Berlin Holocaust Museum, which took place from January to April in 2006. 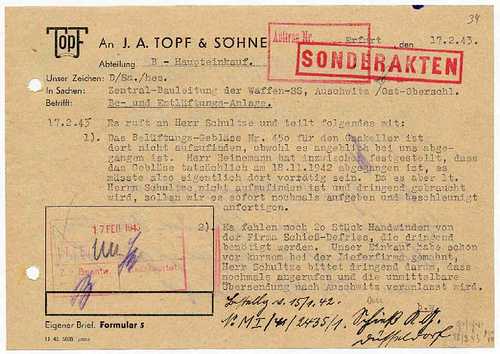 The document has been known since the fall of 1996.  An article titled "Une critique sur le fond" was published in L'Autre Histoire no. 6, date 16 october 1996, p. 9-14.  The article was anonymous but has always been attributed to Jean Claude Pressac.  At one point in the article, which is a rebuttal to Roger Garaudy, we read as follows:

Roughly translated, the article describes the document, and identifies the "Gaskeller" as a "gassing cellar." The author notes the extensive countersigning by employees and executives at Topf, and concludes, inter alia, "When this document is published, no one will be able to call it a forgery."

However, some three months earlier, in July, 1996, Arthur Butz, in the course of his "Vergasungskeller" article, wrote as follows (the second paragraph is key):

"My proposal is that the Vergasungskeller was a gas shelter. It need not have been located within Crematorium II, but I believe it most likely was, on account of the fact that Crematoria II and III, with their large concrete cellars, were obviously ideal for adaptation as air raid shelters. Indeed, when this problem is looked at from the point of view of defense against air raids it seems there was no better choice at Auschwitz. The German authorities responsible for providing air raid shelters would have insisted that the necessary embellishments be made to these structures, which were far more suited to such purposes than, e.g., Crematorium I at the Stammlager, which despite being above ground was converted to an air raid shelter after it was taken out of service as a crematorium in July 1943.[689] My reading of some of the relevant chemical warfare literature convinces me that Crematoria II and III were conceived of by the Germans as having this additional role.

I have never seen the word 'Vergasungskeller' in a lexicon; indeed I have seen it only in discussions of NO-4473![690] I have seen two German-Russian dictionaries, one a military dictionary, that say 'Gaskeller' means 'gas shelter'.[691] However, we should not consider ourselves bound to dictionaries on this. If one asks the question: In a World War II military context, what might 'Vergasungskeller' and/or 'Gaskeller' mean? I think that 'gas shelter' is the answer that comes naturally to mind and that other meanings are somewhat strained. Of course, other meanings come naturally to mind in non-military contexts."

The document was never published by Pressac in his lifetime (Pressac died in 2003).  Moreover, Pressac repeatedly refused requests by revisionists for a copy of the document. However, it was sufficiently well known that the contents could be summarized by Samuel Crowell in 2000 as follows:

The reference to this document comes from an article entitled 'Une critique sur le fond' that appeared in the French periodical L'Autre Histoire,no. 6, October 16, 1996, p. 9-14.

The document is described as a note from Sander of Topf & Sons relating a telephone conversation with Karl Schultze, the engineer in charge of ventilation at Topf who had just returned from Auschwitz. There is a reference to the missing ventilation system for the 'Gaskeller'.

The document follows on the Vergasungskeller letter. The gas chamber interpretation would of course consider this further proof of the intended use of Morgue #1 of Crematorium II for gassing people. However, a 'Gaskeller' is a 'Gasschutzkeller', or gas protection cellar, that is, a kind of bomb shelter. It would be very useful to have a copy of this document available.

From a disinfection point of view, this document simply confirms the various evidence that some kind of disinfection is planned or is being carried out in Morgue #1 of Crematorium II."

Nothing in the presentation of the document in the brochure contradicts these comments.  The document is now in the Thuringian archives in Weimar.

The brochure makes it rather clear that the document was obtained from Pressac's estate.  In what might be described as an "enormous gaffe" the brochure considers the document prima facie evidence for the use of Morgue 1 of Crematorium II as a gas chamber.  The problem is that a "Gaskeller" is a gas shelter, that is, a bomb shelter designed to provide protection from poison gas attack. (In addition, a gas shelter will typically have showers and/or laundries to decontaminate people and their belongings after a poison gas attack.)

The document may be transcribed as follows:

It may be translated as follows:

1.   The ventilation blower no. 450 for the gas shelter cannot be found there, although it was supposedly sent. Mr. Heinemann has in the meantime found out that the blower was indeed sent on 18.11.1942 and therefore should be available there. As according to Mr. Schultze it cannot be found, we are asked to order it again and manufacture it at an accelerated pace.

4.)        There are still missing 20 hand winches from the company Schieß-Defries, which are urgently needed. Our purchase department has already reminded the supplier, Mr. Schultze urgently asks that the supplier is called again and the immediate sending to Auschwitz is taken care of.

The back of the document is not provided in the brochure, but is accessible elsewhere on the memorial exhibition's Website. In the surrounding context of documents, this document clearly references Morgue 1 of Crematorium II, because the 3.5 hp blower was in fact the kind of blower installed in that morgue, although it apparently did not function properly for long.

The document looks back to previous correspondence in November 1942, concerning a "Sonderkeller" to be equipped with ventilation, and also to the late January 1943 "Vergasungskeller" document.  This shows that the intent to use the Morgue 1 of Crematorium II as a "Gaskeller" goes back at least to the fall of 1942.

Proponents of the exterminationist school will consider this yet another piece of the puzzle proving that half a million people were murdered in the basement of this crematorium.  However, that interpretation cannot stand, first, because "Gaskeller" is a "gas shelter", not a "gas chamber", second, because casual knowledge of this space as a gas chamber throughout the Topf organization contradicts the supposed prohibition on discussion or knowledge of this space as a gas chamber, which in turn is supposed to explain why there are no clear references to gassing people in any Auschwitz documents. Third, because if the space was foreseen for gassing people in November 1942, that does not explain why no holes were in the roof of the Morgue as late as the Winter of 1942-43, as photographic evidence shows. 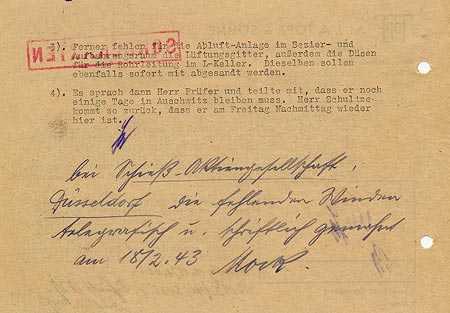 The back of the document

The verso has been located and further fails to support the extermination hypothesis.  The first paragraph reads:

It may be translated as follows:

3) Furthermore, the ventilation grating for the air exhaust in the Dissection Room and the Lying in State Room are missing, as well as the nozzles for the pipes in the "L-Keller."

"L-Keller" is normally translated as "Leichenkeller" by students of the subject, however, that makes no sense in the above, since all three of the rooms were "Leichenkeller", that is, they were morgues. However, "L-Keller" is sometimes also encountered as an shortening of "Luftschutzkeller" (normally, "LS-Keller"), in other words, a bomb shelter.

Also, "Düsen" normally means "jets" in the usual sense. However, in connection with piping, it normally refers to the nozzles for hoses or showers.