The Jewish Central Agency is filing charges against Catholic bishop Richard Williamson due to remarks that he made on Swedish television. Williamson, a bishop with the priestly fraternity the Society of St. Pius X spoke on the Uppdrag Granskning  (Research Mission) television broadcast with reporter Ali Fegan. 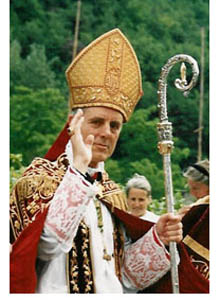 During the interview Bishop Williamson expressed doubt that any Jews were killed in gas chambers during the Holocaust and that no more than 200,000 to 300,000 perished by all causes\. Williamson also cited the work of Fred A. Leuchter.

Bishop Williamson risks prosecution and prison after the interview, which was conducted in Germany in November 2008. Germany denies freedom of speech and expression with regard to the Holocaust. A spokesman for the public prosecutor's office in the southern city of Regensburg said it had opened an investigation against Williamson.

The likely catalyst for both the broadcast and the turmoil over Williamson's views is Pope Benedict XVI recent decision to lift the excommunication of four bishops who were consecrated in 1998 by the ultra-conservative French bishop Marcel Lefebvre, including Williamson. Lefebvre, who died in 1991, was excommunicated in 1988 by Pope John Paul II for having consecrated the bishops in defiance of the Vatican's authority.  Since assuming office of Pope in April 2005, Benedict has made great efforts to heal the schism with the more traditionalist Catholic movement.

Lars-Goran Svensson, the Swedish program's producer, said the interview had been pre-recorded in Germany last November and its airing at this time was "pure coincidence."

Jewish groups have denounced the Vatican and warn that Pope Benedict's decision has serious implications for Catholic-Jewish relations and may impact the pontiff's planned visit to the Holy Land later this year.