Many years ago a comic named Johnny Stanley was featured on a novelty record called "It's in the Book." On this record Stanley delivered a mock sermon using the "Little Bo Peep" nursery rhyme. The second part of the recording was a hymn which had nothing to do with religion, just as the sermon was not based on scripture. The hymn was "Grandma's Lye Soap" which poked fun at the homemade soap produced, mostly in rural areas, three or four generations ago.

One can still find soap-making demonstrations at arts and crafts fairs and heritage festivals in small towns. Lye soap is also made at rustic tourist venues which rely heavily on nostalgia like Silver Dollar City in Branson, Missouri. Instructions for making soap can be found on the Internet. Making soap is not a complicated business. It requires very simple equipment and very few ingredients (i.e. lye — the caustic chemical used in many drain cleaners -- and fat.)

A rumor having to do with soap circulated in Europe during World War II. It was one of several rumors which had ghoulish behavior of Nazis as the central theme. This rumor was a variation on a black propaganda story concocted by the British about the Germans during World War I. During that war a story appeared in the German press that the Germans were taking dead horses and rendering the fat from them to be used in soap. Germany is a country of shortage during wartime and nothing is let go to waste. The British altered the story and fed it back into Germany that dead German soldiers were being rendered for their fat for soap production instead. After the war was over, Great Britain apologized for this and other atrocity stories it spread during the war. 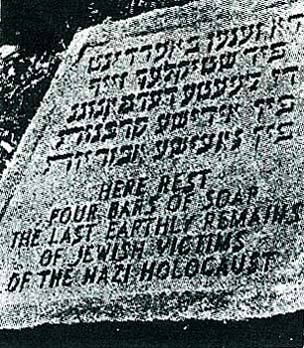 This story was resurrected during World War II in a Germany again beset by war shortages. There are at least three versions of the human soap story as it relates to Nazi Germany. The first and one most widely circulated was that soap was made using fat rendered from the bodies of murdered Jews. This soap was stamped with the initials "RJF" which allegedly meant the soap was made from pure Jewish fat. Actually, the stamp on the soap was "RIF" which stood for Reichsstelle Industrielle Fettversorgung, the organization that made the soap.

A second version resulted in several people being either imprisoned or executed. In this version, the Nazis merely experimented with making soap from dead people. It is not known who the dead people were since the corpses used in the experiments had already been decapitated before being delivered to a laboratory in Danzig where they were rendered and turned into soap. The Soviets obtained confessions that these experiments took place. They released photos of dead bodies sticking out of what looks like a deep freezer, a quantity of soap, and a recipe for soap. A trial was held in which several people were convicted and sentenced.

Finally, there is a story that an unsavory brigade of the Waffen-SS known as "Dirlewanger" made soap from the bodies of Jewish women it had executed. This tale is contained in Konrad Morgen's affidavits obtained after the war. According to Morgen, Oskar Dirlewanger, the brigade's commander, injected women with poison, cut them into pieces, mixed the pieces in with horse meat and boiled the concoction into soap. (I hope you are not eating while reading this.)

There is no evidence to indicate any of these stories are true, but many who lived during the war believe,particularly the first of the soap stories even though this version is the one which is most demonstrably false. Because people will believe the worst about their enemies, any horrible accusation having to do with them, particularly when the source is considered credible, will be enthusiastically accepted as a proven truth. Leather gloves, lamp shades, and book covers made from human skin a la Jonathan Swift's A Modest Proposal; bones ground into fertilizer; hair- stuffed mattresses and soap from human fat are all tales readily swallowed because enemies are supposed to be hated. Yes, rumor had it, the Nazis put everything to use except the squeal. Consequently, anything they got, they deserved because they were the enemy and they were evil.

The propaganda does its bit for the war effort and the incitement to hate ends with the war. It is part of the pattern of war. It works every time. People will believe anything about people they hate if it aids them in their hatred and assures them of their own moral superiority. World War II ended over fifty-six years ago. These horror stories have been debunked for decades for the blood-libel that they are.

Nevertheless, according to The Jewish Journal of Greater Los Angeles, an elderly Romanian Jew named Lupu Gutman has resurrected the horror story of Nazi ghoulishness in a documentary called "Monuments of Soap." In it, European graveyards are visited where RIF soap had been buried under the pretense that it had been made from the bodies of murdered Jews. Belief in this canard still persists in those who are still cling to their hatred. The fact that this old man, who was still in his teens when the war ended, wants to pass on his hatred to today's gullible teenagers tells us how much he values it.

The Germans didn't make soap from human corpses. The fact that, at the end of the war, a few credulous Jews buried cakes of RIF soap in cemeteries and raised monuments on the sites to their own stupidity and hatred for Germans doesn't make the human soap lie a fact.

Lies die when they outlive their usefulness. The soap story has been largely forgotten in the last half century like the embarrassing markers erected to buried soap and intense hatred. Gutman does not want his hatred to die, not even when he does. He wants "kids who go to libraries" to keep the fire of his hatred alive and to share his paranoid world view, so that it outlives him.

A woman once commented to Winston Churchill that if he were her husband she would give him poison. Churchill responded that if she were his wife he would gladly take it. One can only hope that when given a choice, teens who go to libraries will leave this stupid and false propaganda piece on the shelf to collect dust so that it too will be forgotten along with the head stones raised to Mr. Bubble, and Mr. Clean erected in neglected European graveyards by a poisoned past to poison the future. This poison--offered by a dying, hateful man--is a poison that need not be taken.