This summer, Democratic Assemblyman from Brooklyn, New York Dov Hikind launched a misguided assault against Inconvenient History and several other publishers who carry among other things Holocaust revisionist articles and commentary. Hikind is attempting to financially hamstring several organizations by arranging a vendor boycott of sorts in which major credit card companies are bullied or otherwise coerced into ceasing to do business with us.[1]

The assault apparently against our ability to publish and sell books asserts falsely that Inconvenient History is a “hate group.” Hikind opined, “Unfortunately, it is no longer shocking in this day and age to find those who deny the Holocaust—those who espouse openly racist, hateful ideologies.” Hikind, who asserts that his grandmother “went to the gas chambers” finds it “immoral” that credit card companies would do business with us.

Hikind has attempted this sort of thing before. In fact in 2009 he bulldozed American Express into canceling the merchant agreement with British historian David Irving. While it’s not worth pointing out all of the errors of that enterprise and of Hikind’s perspective on these matters, I do want to correct the record on the smearing of Inconvenient History as a “hate group.”

Wikipedia, the on-line encyclopedic source for most popular knowledge explains rather simply that hate is “a deep and emotional extreme dislike that can be directed against individuals, entities, objects, or ideas. Hatred is often associated with feelings of anger and a disposition towards hostility.”[2] While there can be little doubt that Mr. Hikind harbors a deep and emotional dislike of us and our ideas and one suspects that he is both angry and hostile, we can assure you that we at Inconvenient History are resisting the temptation to feel the same about our malefactor Mr. Hikind.

To better understand Inconvenient History, one needs to consider the broader topic of historical revisionism. Recently a great example was publicized throughout the nation’s media. It has just been reported that a new documentary that will debut on 3 November is making a blockbuster claim with regard to the assassination of President John F. Kennedy. The new documentary, JFK: The Smoking Gun offers the theory that there was indeed a second shooter on that fateful day in Dallas. It contends that the second shooter was none other than George Hickey, a member of Kennedy’s own Secret Service.[3]

While I have yet to see the documentary and am not vouching for its accuracy, it is relevant to understand the theory that is offered. Far from yet another conspiracy tale, the theory is that Hickey accidently fired the kill shot.

The documentary is based on the work of Colin McLaren, an Australian police detective who based his work on Bonar Menninger’s book, Mortal Error: The Shot That Killed JFK.[4] In short, the theory is that having heard the first shot fired from Lee Harvey Oswald’s gun, Hickey raised his AR-15 to return fire. When the car he was in suddenly stopped, Hickey accidently pulled the trigger and the shot intended for Oswald accidently struck Kennedy instead. 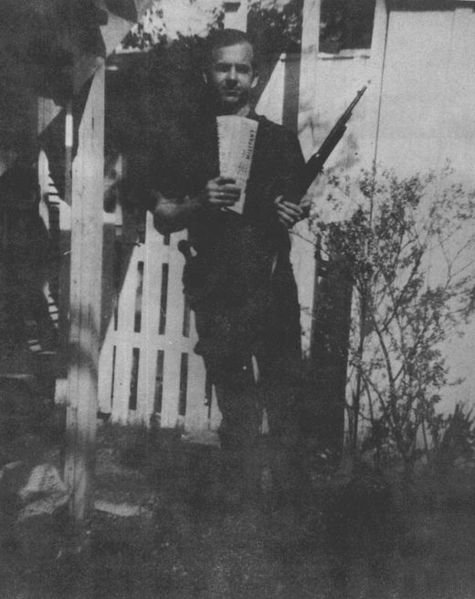 If history proves that Lee Harvey Oswald didn’t fire the shot that killed John F. Kennedy, are we all Kennedy haters or Oswald-sympathizers?
By Marina Oswald [Public domain], via Wikimedia Commons

McLaren asserts that his conclusions were based both on witness testimony and forensic evidence. McLaren says that the trajectory of the fatal shot and the size of the entrance wound are inconsistent with the ammunition that Oswald used but are in line with the type of ammunition used in Secret Service weapons.[5]

While there can be no doubt that McLaren’s documentary will be controversial (and perhaps, some might even say, inconvenient), it is scheduled to be broadcast this November. No one is asserting that McLaren is a “Kennedy-hater.” In fact, such an idea is far-fetched and preposterous to anyone considering the matter. Neither would any rational person assert that McLaren is an “Oswald-sympathizer” or that he is secretly plotting a Boys from Brazil-like resurrection of Oswald or the creation of some new band of assassins to target our nation’s leaders. McLaren may certainly be wrong, but no one is calling for banning his documentary or the book that it was based on. No one is calling for a boycott nor for credit cards to cease doing business with those selling his book.

And yet, McLaren’s work appears to be solidly within the historical revisionist milieu. McLaren has done investigation, he has interviewed witnesses, he has conducted forensic studies. If right, McLaren would be correcting an important historical controversy that has defied scholars and the general public for 50 years.

His theory will not bring Kennedy back to life. Neither will it exonerate Oswald for his crime, but it could shine a light onto a historical event that has shaped aspects of American politics for the past 50 years.

Revisionism of the Holocaust, likely the most contentious field of all aspects of historical revisionism, is quite the same. Today the majority of victims and perpetrators are dead. While it may be little consolation to learn that one’s ancestors did not die through the inhalation of poison gas, and may not even have been murdered at all, the historical record should be correct.

There is no hatred in trying to determine what actually happened in the Nazi concentration camps. There is no hatred in attempting to learn the real fate of the Germans’ slave laborers and “racial undesirables” during these tragic years. There is likewise no hoping for a return to this dark time. In fact, as revisionists, we hope that our efforts lead to a greater peace between nations and goodwill between peoples.[6]

We deeply regret what appears to be the deep-harbored hate that Dov Hikind holds for our stance and for those who question the official Holocaust story. If Mr. Hikind could learn the truth, that truth would set him free.