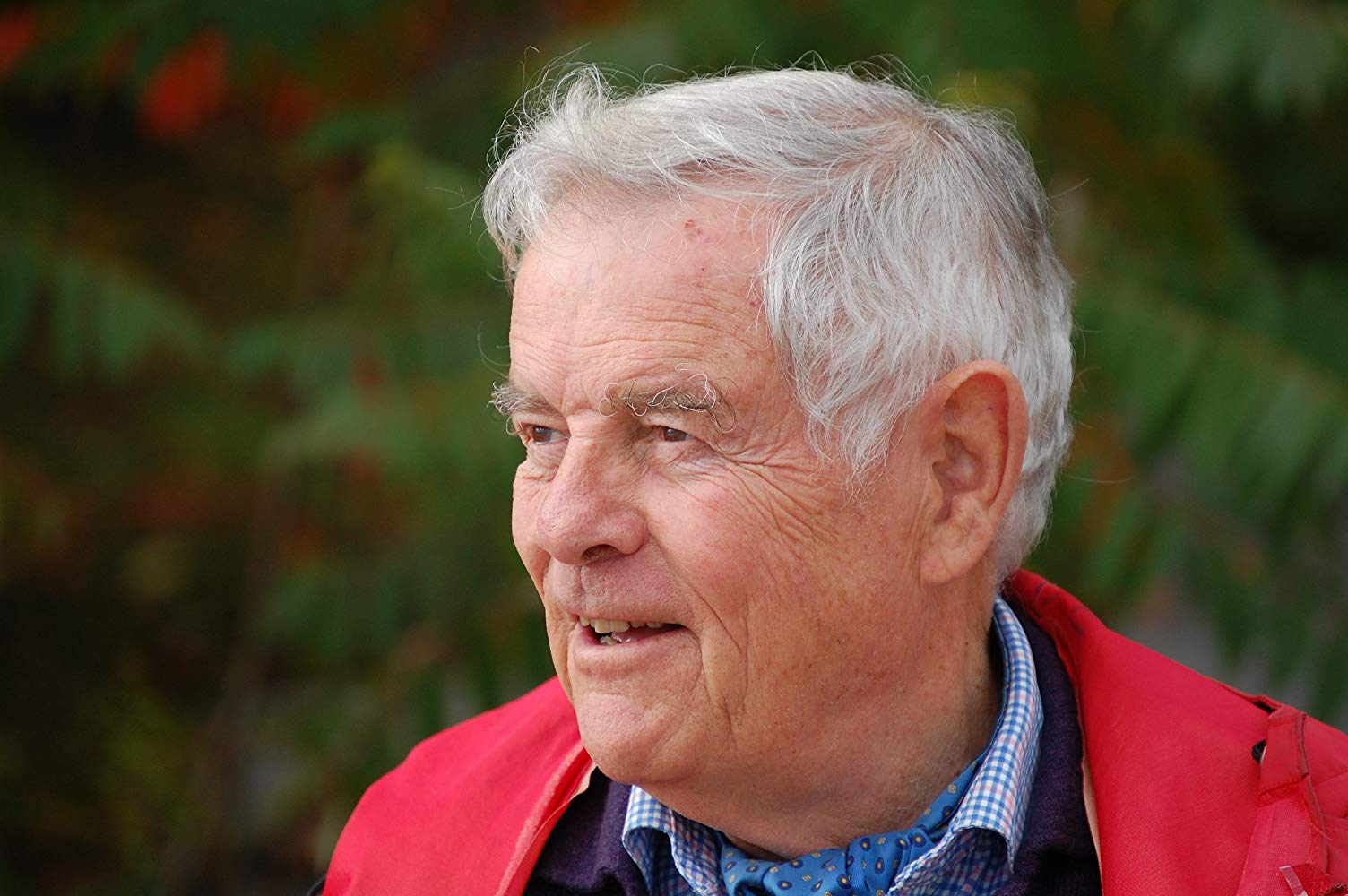 James Bacque died peacefully on September 13, 2019, surrounded by his family after suffering multiple strokes. His wife Elisabeth says James was lucid and listening to the end, and that his sense of humor never failed him.

Bacque had a long literary career as a journalist, an editor and a publisher. His first books were novels followed by short stories, history, a biography, essays and a play. His final novel Our Fathers’ War portrays World War II from both sides of the conflict.

While researching a book about Raoul Laporterie, a French Resistance hero, Bacque interviewed a former German soldier who had become a friend of Laporterie. Laporterie had taken this man, Hans Goertz, and one other, out of a French prison camp in 1946 to give them work as tailors in his chain of stores. Goertz declared that “Laporterie saved my life, because 25% of the men in that camp died in one month.” What had they died of? “Starvation, dysentery, disease.”

Checking as far as possible the records of the camps where Goertz had been confined, Bacque found that it had been one of a group of three in a system of 1,600, all equally bad, according to the International Committee of the Red Cross reports in the French army archives at Vincennes, Paris. Soon Bacque came upon the first hard evidence of mass deaths in U.S.-controlled camps. This evidence was found in army reports under the bland heading “Other Losses.”

In the spring of 1987, Bacque and Dr. Ernest F. Fischer, Jr., a retired colonel in the U.S. Army and a distinguished army historian, met in Washington, D.C. They worked together over the following months in the National Archives and in the George C. Marshall Foundation in Lexington, Virginia, piecing together the evidence they uncovered. In the United States National Archives on Pennsylvania Avenue, Bacque found the documents with the heading Weekly Prisoner of War and Disarmed Enemy Forces Report. In each report was the heading "Other Losses," which resembled the statistics he had seen in France.

Bacque reviewed these reports with Col. Philip S. Lauben, who had been chief of the German Affairs Branch of Supreme Headquarters, Allied Expeditionary Force in charge of prisoner transfers and repatriation. Bacque and Lauben went over the headings in the reports one by one until they got to the heading Other Losses. Lauben said, “It means deaths and escapes.” When Bacque asked how many escapes, Lauben answered “Very, very minor.” Bacque later learned that the escapes were less than one-tenth of 1%.[1]

Bacque wrote that because some prisoner documents were deceptive when made, and because many records were destroyed in the 1950s or hidden in euphemisms, the number of dead will always be in dispute. However, there is no question that enormous numbers of men of all ages, plus some women and children, died of starvation, exposure, unsanitary conditions and disease in American and French prisoner-of-war (POW) camps in Germany and France starting in April 1945.

Bacque estimated in his book, aptly titled Other Losses, that German POW deaths undoubtedly number over 790,000, almost certainly over 900,000, and quite likely over a million. The prisoners’ deaths were knowingly caused by army officers who had sufficient resources to keep these German POWs alive. Relief organizations such as the Red Cross that attempted to help prisoners in the American camps were refused permission by the Army.[2]

James Bacque wrote that the response he received following the original publication of Other Losses was amazing. Bacque stated: “Most gratifying has been the huge response from thousands of ex-prisoners who have written to me, or telephoned, sent faxes or e-mail, or even called at my door, to thank me for telling a story they feared would die with them. They continue to send me diaries, letters, Tagebücher, self-published books, typescripts of memoirs, in three or four languages, along with photographs, maps, drawings, paintings and even a few artifacts.”[3]

However, Bacque also sustained vociferous criticism from establishment historians and the mass media after the publication of Other Losses. Bacque was never intimidated by such criticism, and later found corroborating evidence in the Soviet archives. Bacque wrote: “Among all of the many editors, writers, TV producers and professors all over Europe and North America who have furiously denounced the author of Other Losses since 1989, not one has ever commented on his subsequent amazing discoveries in the Soviet archives.”[4]

James Bacque ended Other Losses with an appeal for open-mindedness and understanding. Bacque wrote: “Surely it is time for the guesswork and the lying to stop. Surely it is time to take seriously what the eye-witnesses on both sides are trying to tell us about our history. All over the Western world, savage atrocities against the Armenians, the Ukrainians and the Jews are known. Only the atrocities against the Germans are denied. Are Germans not people in our eyes?”[5]

Bacque later expanded on his historical work with the book Crimes and Mercies: The Fate of German Civilians under Allied Occupation 1944-1950. He wrote that the Allies were able to conceal their murderous policies toward the Germans since they controlled everything of consequence in Germany. The statistics of German deaths after the war were all under Allied control, and there was no independent German government to dispute the Allied figures. The U.S. Military Governor reports were designed to reflect favorably on the Allied postwar treatment of Germany. These U.S. reports, which have been widely used to determine Westerners’ view of Germany’s postwar history, showed figures indicating no large number of Germans died in the three Western zones from 1945 to 1950.[6]

German deaths after the war can be divided into three groups of people. The first group is the German POWs in both Europe and the Soviet Union. The second group is the Germans forcibly expelled from Eastern and Central Europe, and the third group is the Germans already residing in Germany. While no one will ever know how many Germans died from 1945 to 1950 as a result of the Allies’ policies, it is certain that the deaths far exceed most traditional estimates. The great majority of these deaths were caused by the lethal policies imposed by the four victorious Allies after the war.[7]

Bacque estimated that a minimum of 1.5 million German POWs, 2.1 million German expellees, and 5.7 million German residents died needlessly after the war. This minimum estimate of 9.3 million German deaths is far more than the number of Germans who died during World War II. Millions of these Germans slowly starved to death while the Allies withheld available food. The majority of these postwar dead Germans were women, children and very old men. Their deaths have never been honestly reported by the Allies, the German government or most historians.[8]

The world owes James Bacque a huge debt of gratitude for his outstanding and groundbreaking research into this painful, controversial and underreported period of history. Bacque’s friend, American historian Alfred-Maurice de Zayas, writes: “We owe James Bacque our recognition for his courage to raise new and uncomfortable questions. We thank him for the answers he proposes. Let the debate begin.”[9]

[1] Bacque, James, Other Losses: An Investigation into the Mass Deaths of German Prisoners at the Hands of the French and Americans after World War II, 3rd edition, Vancouver: Talonbooks, 2011, pp. lxv-lxvi.