Many of those who view “Titanic,” the new blockbuster motion picture, may leave the movie theater believing that the April 15, 1912, sinking of the great British liner, with the loss of 1,523 men, women and children, was history’s greatest maritime disaster. 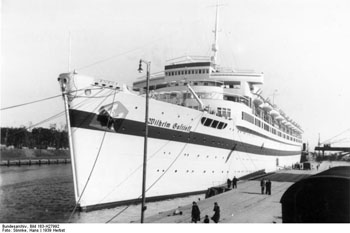 The "Wilhelm Gustloff," which served before as a luxury liner, was overloaded with desperate civilian refugees when it was struck on January 30, 1945, with the loss of at least 5,400 lives. 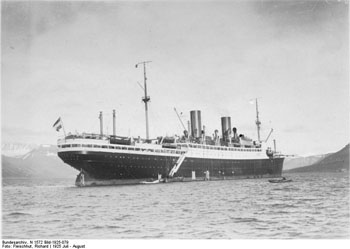 The "Goya," shown here with camouflage paint, was attacked by Soviet submarine L-3 on April 16, 1945, taking almost 7,000 lives. This little-known sinking is the greatest naval disaster in history.

Others may perhaps think of the British passenger liner Lusitania, which sank on May 7, 1915, after being hit by a German submarine torpedo, taking 1,198 lives.

But these disasters are dwarfed by the sinkings of the Wilhelm Gustloff, the General Steuben and the Goya, three German ships crowded with evacuated refugees and wounded soldiers that were struck by Soviet submarines during the final months of the Second World War.

As John Ries points out in his essay in the Fall 1992 Journal, “History’s Greatest Naval Disasters,” more lives were lost in the case of each of these vessels than in the sinkings of either the Lusitania or the Titanic.

The first of these German ships to go down was the Wilhelm Gustloff, a 25,000-ton converted luxury liner that had been serving as a hospital ship. When it left the Baltic harbor of Gydnia (Gotenhafen) on January 30, 1945, it was jammed with nearly 5,000 refugees, mostly women and children, and 1,600 military servicemen. At shortly after nine o’clock in the evening, it was struck by three torpedoes from Soviet submarine S-13. Convoy vessels were able to rescue only about 900 from the sub-freezing Baltic waters. At least 5,400 perished.

Eleven days later, shortly after midnight on February 10, the General Steuben sank with a loss of 3,500 lives, making this the third worst maritime disaster in history. The same Soviet submarine that had attacked the Gustloff, and in almost the same location, sank the Steuben with two torpedoes. Crammed with as many as 5,000 wounded soldiers and refugees, the converted passenger liner sank in just seven minutes.

The sinking of the Goya on April 16, 1945, just three weeks before the end of the war in Europe, is acknowledged as almost certainly the greatest maritime disaster, in terms of lives lost, of all time. The converted 5,230-ton transport ship had set out from Hela near Danzig (Gdansk) with its human cargo of some 7,000 refugees and wounded soldiers.

Just a few minutes before midnight, the Soviet submarine L-3 fired two torpedoes at the Goya, which found their marks amidship and stern. Almost immediately the ship broke in half, her masts crashing down upon the passengers crowding the decks. Before anyone could escape from the holds, the onrushing sea quickly drowned out the anguished screams of the refugees below. The vessel sank in just four minutes, resulting in the loss of nearly 7,000 lives. There were only 183 survivors.

Concluding his essay on this chapter of history, Ries wrote:

Although little known, the sinkings of the Wilhelm Gustloff and the Goya – with a combined loss of more than 12,000 lives – remain the greatest maritime catastrophes of all time. Moreover, the deliberate and unnecessary killing of thousands of innocent civilian refugees and helpless wounded men aboard the Gustloff, the Steuben and the Goya – as well as many other smaller and lesser known vessels – is unquestionably one of the great atrocities of the Second World War.

Lesser known but also worthy of note is the sinking of the German battleship Bismarck on May 27, 1941. Following intense attack in the Atlantic from British planes and four major British warships, it went under with the loss of some 2,200 men.

Even more tragic is the case of the Cap Arcona, a 27,650-ton converted German passenger ship packed with evacuated concentration camp inmates. On May 3, 1945, just a week before the end of the war, it was sunk by fire from a British fighter-bomber as it was moored in Lübeck harbor. Some 5,000 persons, nearly all of them inmates, lost their lives. Only about 500 could be rescued.

A similar fate befell the Thielbek, a German ship likewise packed with 2,800 inmates who were being evacuated from the Neuengamme concentration camp. Succumbing to intense fire from British war planes, it sank on May 3, 1945, with the loss of all on board.

"No sadder proof can be given by a man of his own littleness than disbelief in great men."
—Thomas Carlyle

"The farther backward you can look, the farther forward you are likely to see."
—Winston Churchill