‘Hitler in Love’ – the Poetry and Art of Der Fuehrer

Following is a Story that happened more than a year ago from the English-language edition of the Polish newspaper The Szczecinianin (SZ-N.com). I should have heard of this, but I didn’t. Hitler in Love! As a young man. Wounded in battle, he is hospitalized and falls in love with one of his nurses. Sounds like a story I’ve been familiar with for a very long time, though in those days it wasn’t about Hitler. When I was 22 years old, back from Korea, the story was called A Farewell to Arms by Ernest Hemingway. I had never before read a novel I had thought so beautiful.

Now I find that Adolf Hitler, being in hospital the same season that Hemingway was in hospital, in 1918, fell in love with one of his own nurses just as Hemingway had. There’s an unexpected story here, one that’s never been imagined. Perhaps some cosmologically ethereal association could work itself out in the brain. Hitler and Hemingway as cronies in war, suffering, love—and art. And then there is also the possibility for a comic, wise-guy literary performance that I might be able to realize. It’s all there. But not now.

Following is the full article about Hitler in Love, his art and his poetry, from The Szczecinianin http://tinyurl.com/m6kbvjn There are two paintings reproduced online, one of a monk on the beach, the other of a vulture on a spade. They are each so muted, so spacy, that I cannot reproduce them here. But the portrait he painted of his sweetheart is a classic.

The author who wrote this piece appears to be one Sigmund von Stettin.

‘HITLER IN LOVE’ – THE POETRY AND ART OF DER FUEHRER

This Sunday, April 1st 2012, the castle of the Pomeranian Dukes, Szczecin, is to open a controversial exhibition of Adolf Hitler’s art-work, correspondence, and some of his personal possessions that were left behind during his residence in Stettin in 1918 and 1919.

This is the first time most of the material has ever been exhibited to the public, as Hitler’s cache of art treasures in Szczecin was something of a closely guarded secret throughout the years of the Polish People’s Republic. Even after the fall of Communism, and the advent of democracy in Poland, city officials were for many years reluctant to admit to the existence of a large archive of art, produced during Adolf Hitler’s most creative period, shortly after the end of World War I.

So why has a considerable body of poetry, a sizeable collection of paintings, and even an opera, by one of the most significant and controversial historical figures of the twentieth century, been kept hidden by city officials in Szczecin for almost a century? Let’s examine the story of Adolf Hitler’s sojourn in Western Pomerania.

On October 15th, 1918, Adolf Hitler was blinded by gas, which led to his hospitalisation in Pasewalk, some 50km to the east of Szczecin, where he remained in hospital between October 21 and November 19 of that year. Little is known of his movements and activities between November 1918, when he left the hospital, and 12 September 1919, when he first attended a meeting of the German Workers’ Party in Munich on 12 September 1919.

Although the historical records pertaining to Hitler’s activities in the winter of 1918/19 are somewhat sparse, if not nonexistent, local histories in Pasewalk have mentioned frequent rumours, vehemently denied during the Nazi era, of a romance between the 30-year-old Adolf and one of his nurses, known only by her first name ‘Jutta’.

From recently declassified Polish archive documents, we now know the full name of this nurse to have been Jutta von Sznabel (1893-1965), a woman who appears to have been airbrushed from history, largely for political reasons.

Jutta, the widowed daughter of a Pomeranian landowner and his half-Jewish wife, appears to have been attracted by the more sensitive and artistic side of the young Adolf Hitler. So besotted did she become with him, that at the end of 1918 the two eloped together, and took the then highly unconventional step of setting up house together in Stettin, as Szczecin was then known.

For the following eight months, Adolf and Jutta set up home together, Jutta continuing to work as a nurse, and the young Adolf, then refusing to take up gainful employment, painting, writing poetry and composing a hitherto unknown opera, Andromache. Re-lations soured, however, presum-ably because of Adolf’s failure to find gainful employment, or even seriously look for work, and the opposition of Jutta’s family, who regarded Adolf as a ‘wastrel’.

In June 1919, matters came to a head when Jutta announced her intention of marrying the impoverished Adolf. This was regarded as being entirely unacceptable by the von Sznabel family, with her mother, Helga, being vehemently opposed to the marriage, referring to Adolf in a letter as that vile ill-educated Viennese cad.

Jutta and Adolf ended their relationship, with a bitterly disap-pointed Adolf returning to Munich, where he had lived prior to the First World War, sometime in the early summer of 1919. The next historical mention of Adolf Hitler was in July 1919, when he was appointed 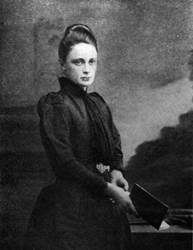 an agent in the Verbindungsmann intelligence service of the Reichswehr. On 12 September 1919, Hitler joined the German Workers’ Party, the DAP, forerunner of the NSDAP, the Nazis. The rest, as they say, is history.

Adolf Hitler had expressed strong anti-Semitic sentiments, both before and during the war, but it is believed that his rejection by the partly Jewish Jutta, and her half-Jewish mother, added fuel to the already smouldering fire.

“I should have known better, you should never trust a Kike, or even half-a-kike,” Hitler remarked in a personal letter to a friend.

But what became of Jutta after 1919, following her ill-fated romance with the future Nazi dictator? It seems she simply threw herself into her work of caring for the sick, and later later cared for her increasingly frail and elderly parents, who both died in the late 1930s. The scandal of her having eloped with the future leader of the Third Reich was a closely guarded secret, and following Hitler’s assumption of power she was forcibly advised to keep the relationship strictly to herself. It appears that between the years 1934 and 1945 she was kept under virtual house arrest, with all visitors, mail and telephone calls strictly censored by the Gestapo.

In May 1945, she was captured by Russian soldiers, and questioned for several months by the NKVD, who knew something of her former relationship. However, given her disinterest in matters political, and avowed antipathy to all things Nazi, there was little or nothing of interest she could reveal.

There then came the problem of what to do with this unfortunate woman, who had not really done any wrong. Being German, she was not allowed to remain in People’s Poland. Given her ‘unlucky’ personal history, postwar Germany was extremely reluctant to give her sanctuary. In 1949, the somewhat tragic figure of Jutta von Sznabel emigrated to Israel, where she was given Jewish citizenship through matrilineal descent, where she lived under an assumed name, Judith Rosenbaum, until her death in 1965.

Various letters, works of art and personal belongings of the young Adolf Hitler, which had been kept by Jutta (who appears to have been something of a compulsive hoarder), were then placed in the Szczecin archives, where they remained unnoticed and undisturbed for a number of years.

How exactly did this treasure trove of Hitler-related artifacts come to the attention of the public? Between the years 1949 and 1989, the Hitler artifacts and memorabilia remained the property of the Ministry of Public Security of Poland, Bezpieczeństwa Publicznego or MBP, which had no desire to publicize Hitler’s connection to a recently Polonized city. In 1993, the controversial historian David Irving, who had researched the sad tale of nurse Jutta, made his first attempt to look at this controversial material in Szczecin city archives, but was rebuffed for reasons of ‘public security’. Finally, in July 2011, the authorities finally admitted to the presence of articles related to Hitler, and allowed access to a few selected historians.

April 1st, 2012, is the first time ‘the Szczecin Hitler collection’ has been made available for public viewing.

The exhibition, ‘Hitler in love, the poetry and art of der Fuehrer’ can be viewed every day in April, May and June, 10.00 – 17.00, in the Castle of the Pomeranian Dukes, Szczecin.