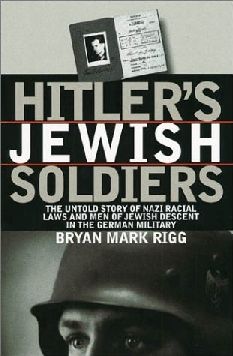 On December 2, 1996, The Daily Telegraph reported briefly about a research work by the American Bryan M. Rigg about "Jews in Wehrmacht Uniform" (similar the London Times on Dec. 6, 1996). During the following four years, Rigg deepened this topic considerably during his doctoral dissertation which was published in May 2002.

Bryan Rigg received his doctor title in history at the age of 31 from the university of Cambridge under Professor Jonathan Steinberg. Today, Rigg is history professor at the American Online Military University.

Rigg’s book is primarily based upon approximately 430 interviews with former Wehrmacht soldiers who were at least partially Jewish, i.e., of "mixed-race" according to National Socialists terminology. Rigg’s thesis belongs to the category of "history as experienced and reported," which means that it is based upon witnesses accounts that have been evaluated by the author and brought into the context of the time. Rigg therefore belongs to a type of journalistic authors like John Sack with his book An Eye for an Eye, who did not research the history of the extermination camps in postwar Poland based on documentations and secondary literature, but through "verbal stories," i.e., a series of interviews with victims and perpetrators.

Based on statistical extrapolations, Riggs estimates that during the Second World War at least 100,000 soldiers of mixed Jewish background, as defined by the Nuremberg laws, served in the Wehrmacht. Most of them were descendants of non-Jewish Germans and assimilated or baptized German Jews. Rigg concludes that some of these soldiers served in order to escape the threat of persecution, others simply because they felt like Germans and did not act any different than all the other Germans, namely to serve their fatherland faithfully.

Due to the above mentioned media articles in late 1996, Rigg’s study caused some attention already at its very beginning which enabled him to get into touch with many witnesses, but which also caused an unusual measure of criticism and acknowledgements for his dissertation. But the origin of Rigg’s studies goes back to the very beginning of his university studies, when he heard during a stay in Germany that a protestant mother had Jewish ancestors, and when he accidentally made the acquaintance of an older gentleman who talked about his experiences at the eastern front as a "quarter Jew".

As can be expected, it was especially the long line of Holocaust scholars who made comments about Rigg’s theses, as it was reported by the US-magazine The Chronicle of Higher Education of May 3, 2002. (http://chronicle.com/free/ v48/i34/34a01401.htm). Rigg did not only hear discouraging and critical words by various professors during his study, but also after his thesis was published. One of those whose voice is heard in public and who positively described Rigg’s book is Michael Berenbaum, former director of the Holocaust Memorial Museum, as well as Christopher R. Browning, professor of history of the university North Carolina in Chapel Hill. Other Holocausters judge Rigg’s work rather negatively, either because they think the subject is a waste of time (‘who would want to know that 100,000 mixed Jews were Hitler’s willing soldiers?’), or because Rigg’s thesis is allegedly presented in a sensationalistic and distorted way (‘this was already known and is totally irrelevant for the judgment of the Holocaust and the Third Reich’), as per David Cesarani, professor for Jewish history in Southampton, England, or Raul Hilberg, emeritus of the university Vermont.

Some scholars resent that Rigg already tried to gain public attention – and succeeded with it – when his work was still in the an early stage. But it was his PhD supervisor who started this early press campaign in order to enable Rigg to find further potential witnesses.

Other scholars, like Richard J. Evans, history professor in Cambridge, and Omer Bartov, history professor at the Brown university, consider the title of Rigg’s book as inappropriate, because the books is not about Jews but in most cases only about "mixed Jews" as defined by the "racist NS-ideology," but not according to the (not less racist) Jewish view. The title of the book, however, was not chosen by Rigg, but by the publisher for marketing reasons – obviously with success, as it turned out.

Rigg’s supervisor was impressed by the effort with which his student collected documents, most of them originating from Hitler’s Jewish soldiers themselves. In the meantime, Rigg’s collection is located in the German Federal military archive.