The terms “Holocaust denial” and “anti-Semitism” are hopelessly bound together in the public consciousness. In an article published this November on a blog page of the Chicago Sun-Times, it was reported that the US State Department’s Special Envoy to Monitor and Combat Anti-Semitism, Hannah Rosenthal, would pay particular attention to a growing level of Holocaust denial.[1] The article goes on to report that Rosenthal, the daughter of a survivor of the Buchenwald camp, conducted a group of seven American imams and Muslim community leaders to the sites of the former concentration camps of “Dachau and Auschwitz where millions were systematically murdered by Nazi Germany.” The article concludes with the statement that Rosenthal managed to get from the imams bearing witness to the tragedy of the Holocaust.

It all sounds neat and tidy, except of course that anyone who has bothered to look into the Holocaust story at all understands that millions were not systematically murdered at Dachau and Auschwitz. No historians of the revisionist or orthodox schools have made this claim for decades. Ultimately it is exactly such distortions and anti-German statements that motivate many who seek to revise the history of the Holocaust in light of the facts. And make no mistake about it, assertions that the Germans committed crimes in exaggerated numbers or with false macabre details amounts to anti-Germanism. Would there not be wailing and gnashing of teeth if someone asserted that even thousands of Palestinians were killed in Israeli-run refugee camps? In today’s hyper-sensitive, some might say Orwellian, society, which has exponentially multiplied the political correctness of the 1990s it is impossible to correct such outrageous claims about Dachau and Auschwitz without first being charged with Holocaust denial and then along with it anti-Semitism. It is demanded that everyone accept all claims about the Holocaust no matter how fantastic or improbable.

Plato established in his Gorgias, that when engaging in an argument it is most important to initially define your terms in a precise manner.[2] While the general public unconsciously assumes they understand the terms "Holocaust denial" and "anti-Semitism" and their relationship, the truth is likely far from those carefully planted assumptions. 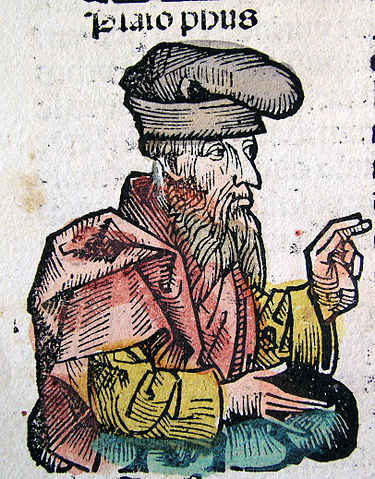 Plato established in his Gorgias, that when engaging in an argument it is most important to initially define your terms in a precise manner. Woodcut from the Nuremberg Chronicle 1493. This is a file from the Wikimedia Commons. This work is in the public domain.

The term “anti-Semitism” emerged from the racial theories and publications of the 19th century. Ernest Renan, a French philosopher and writer, had discussed the alleged limitations of the “Semitic mentality,” referring to Jews in particular. In a criticism of Renan, Jewish bibliographer Moritz Steinschneider is said to have used the phrase “anti-Semitic prejudices” as early as 1860. Generally the phrase however is credited to Wilhelm Marr a German writer. In Marr’s pamphlet Der Weg zum Siege des Germanenthums über das Judenthum (The Way to Victory of Germanicism over Judaism) (1879) he introduced the idea that the Germans and Jews were locked in a longstanding conflict, the origins of which he attributed to race. Marr would also found the League of Antisemites (Antisemiten-Liga), the first German organization that was specifically committed to combating the threat to Germany posed by Jews.

The term anti-Semitism refers specifically to prejudice against Jews alone and rarely is allowed to include other Semitic peoples. It is therefore not unusual to hear Palestinians, a Semitic people, being charged with anti-Semitism. It has even become common to hear the evangelist John (a Jewish fisherman) being charged anachronistically with anti-Semitism for his gospel account. Catholic writer Joe Sobran once quipped, “An anti-Semite used to mean a man who hated Jews. Now it means a man who is hated by Jews.”

“Holocaust denial” is defined on Wikipedia as “the act of denying the genocide of Jews in World War II, usually referred to as the Holocaust.”[3] Three key claims are typically associated with the term: 1) The German National Socialist government had no official policy for exterminating Jews 2) Gas Chambers were not used for mass murder of Jews 3) the actual number of Jews killed was significantly less than six million. Many have credited Deborah Lipstadt if not for creating the term, then for popularizing it in her Denying the Holocaust (1994). Lipstadt calls Holocaust denial “anti-Semitic ideology” in her book. She also describes it as an “irrational phenomenon.”

For Lipstadt, it becomes apparent that "deniers" are not those who express sincere doubts about some element of the Holocaust story but number among those who actually believe the orthodox story in all its gruesome details. The "deniers" purposefully distort materials and even "lie" in order to support their ideology. At various times Lipstadt defines that ideology in varying terms but the net result is always the same, "they are fascists and antisemites [sic] with a specific ideological and political agenda."[4]

It becomes clear then that "Holocaust denial" is a pejorative term intended to discredit and to impugn the character of someone suspected of having an unpopular ideological or political agenda associated with their critique of the traditional Holocaust story. Expressing doubt about the Holocaust may indeed be the first “thoughtcrime” of the post-World War Two age. In George Orwell’s classic 1984 a thoughtcrime is an illegal thought. The government attempts to control not only the actions but the thoughts of its citizens. Orwell also coined the term “Newspeak” in his novel to describe the newly simplified language and its inbuilt support of the ruling totalitarian regime. The basic idea behind Newspeak was to remove all shades of meaning from the language which would leave simple dichotomies (joy and pain). All nonconforming (nuanced) speech would be classified as “thoughtcrime.”[5]

Holocaust revisionism, as most of its supporters prefer to label their efforts includes various shades of meaning. It is a more complex term than Holocaust denial—Oldspeak, if you will. Gone is the two-legs-bad, four-legs-good equation of Holocaust denial equals Fascism and anti-Semitism. The term itself suggests that the Holocaust is a series of events that truly occurred albeit one whose regnant history—unrepaired damage from the past world war—requires correction or revision. It suggests that something is wrong with what is known – but not that all is wrong. It leaves open the possibility that what you believe may not all be correct. It suggests that the stories that we have grown up with may have developed from the emotionally charged subject itself. It opens a pathway to exploration and discovery.

I wonder if the US really needs a Special Envoy to Monitor and Combat Anti-Semitism. The title seems too narrow. It might even be criticized for pandering to one chosen group. Perhaps Hannah Rosenthal would be more accurately called the Special Envoy to Monitor and Combat Thoughtcrime. It would alleviate that impression, even while providing Rosenthal an expanded brief to rival that of Orwell’s Big Brother.