Recently, the heartrending tales of a 95-year-old Pennsylvanian named Joseph Hirt were revealed to be a hoax. Hirt claimed to have been kidnapped by the Nazis and confined in Auschwitz. He illustrated his talks to high school audiences with a photo of an emaciated concentration camp inmate he claimed to be himself. A knowledgeable teacher recognized the photo as one of an inmate of the Dachau concentration camp and exposed other holes in Hirt’s story. When confronted with his lies, Hirt said “I'm sick and I'm tired and I'm old and I don't need this crap." In a comical unintended evocation of the slanderous Holocaust-denier charge, Hirt’s nephew said of his uncle, “He's in complete denial.”1 The blurring of memory with delusion is not uncommon amongst Holocaust survivors, and not just nonagenarians.

Many of the outlandish tales embellishing the Holocaust story are roll-on-the-floor, side-splitting howlers. It may seem in extremely poor taste to poke fun at aspects of the Holocaust story, as I’m about to do, but if you find it so, don’t blame me. Blame those who have appended farcical chapters to what is, at heart, a truly tragic story.

We begin with the Holocaust-denial laws so popular in Europe, which make it illegal to question the orthodox storyline. Leading the inquisition is, not surprisingly, Germany, which has fined and/or imprisoned dozens, if not hundreds, of heretics. As one wag put it, “Today’s leaders of Germany want to prove they’re not the sort of Germans who lock people up for writing books by locking people up for writing books.” And what do the German authorities do with the books written by convicted Holocaust deniers? They burn them (Welcome to the Dark Ages!).2

But the Oscar for Best Comedy in Heresy Suppression goes to France, whose Holocaust denial law makes it a crime to contradict the findings of the Nuremberg tribunal. At Nuremberg it was claimed that soap was made from the fat of Jewish corpses, but Peter Black, senior historian at the United States Holocaust Memorial and Museum, says “It didn’t happen…. even experimentally.”3 He’d better not say that in Gay Paree or he could be accused of contradicting what Supreme Court Chief Justice Harlan Fiske Stone called a “high-grade lynching party”4 and end up in jail.

Many people find the jailhouse confessions of German prisoners proof of the veracity of the Holocaust story. But consider the confession of a German soldier, Arno Düre, who told Soviet prosecutors he had helped bury thousands of Poles executed in the Katyn Forest Massacre. After the fall of the Soviet Union, the Russians, who blamed the massacre on the Germans at Nuremberg, admitted they were the guilty party. No German, including Herr Düre, was anywhere near.5 Many similar confessions by higher-ranking Nazis have proven equally counterfactual.6

Not content with only coerced confessions to justify hanging Nazis, the liberators of the Dachau concentration camp decided to create some physical evidence: they built a gas chamber of their own. Presented as a real gas chamber to tourists for years (and introduced into evidence as such at Nuremberg), the Dachau Museum later informed visitors no one was ever gassed there.7 Less truthfully, they didn’t go on to explain why it’s impossible for anyone to have been gassed in the showcase gas chamber.

The Dachau “gas chamber” is a room with a seven-foot-high ceiling in which are embedded fake, sheet metal showerheads. Here’s a photo of it:8 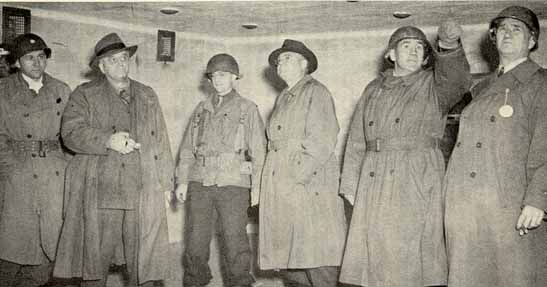 Unfortunately for the fabricators, a congressional delegation visited Dachau just two days after its liberation and they reported the room as having a ceiling ten-feet high protruding from which were real brass showerheads.9 In other words, a room like this one (which is, in fact, the shower room at Dachau at liberation):10 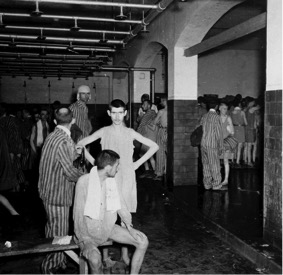 Looks like somebody built themselves a gas chamber, doesn’t it, only it wasn’t the Germans!

But what about the testimony of those who claim to have witnessed gassings, you ask? Well, consider that for years a man named Martin Zaidenstadt, who claimed to be a survivor of Dachau, regaled gullible tourists with tales of his having witnessed gassings at the camp.11 Keep Mr. Zaidenstadt in mind whenever you hear eyewitness accounts, such as the one about children being thrown on top once all the floor space in the gas chamber had been filled by adults (featured on the website of the U.S. Holocaust Memorial Museum),12 or the one about the condemned being given a “nice haircut” just prior to being led into the gas chamber (featured in the acclaimed 1985 movie Shoah),13 or the one about a young girl repeatedly swallowing the family jewels hidden in the hem of her skirt whenever she feared she was about to be searched, then digging them out of her poop and sewing them back in (in the video archives of Steven Spielberg’s Shoah Foundation [“Shoah” is another term for the Holocaust]).14

Then there’s Misha Defonseca, who claimed to have run into the woods to escape the Nazis and been raised by wolves. Who would believe such nonsense? Answer: lots of people. The Romulus and Remus-inspired tale, recounted in her book Misha, received wide acclaim (including an encomium from Elie Wiesel), was translated into 18 languages, and earned her millions (“There’s no business like Shoah business”) before it was exposed as a fraud.15 The capper: Ms. Defonseca isn’t even Jewish!

Other frauds perpetrated on an unsuspecting public include Jerzy Kosinski’s The Painted Bird, a bestseller of the 1960s also lauded by Wiesel;16 Fragments, by Binjamin Wilkomirski, which won the Jewish National Book Award (not bad for a Gentile!);17 and Angel at the Fence by Herman Rosenblat, which was hailed by Oprah Winfrey as “the single greatest love story in 22 years of doing this show.”18 It all goes to show how uncritically Holocaust stories are accepted out of respect for the real victims, except by callous souls who find humor in human credulity (moi?).

Then there’s the testimony which is inexplicably absent. When Winston Churchill heard during the war that the Germans had killed 1.7 million people in gas chambers, he labelled it “the greatest and most horrible crime ever committed in the whole history of the world.”19 But in his voluminous memoir of the war years he fails to mention any gas chambers. Did “the greatest and most horrible crime” in human history slip his mind, even when the final tally was said to be four times greater than what he had heard? Or, with the liberation of the camps, did he realize the story was a myth, which he assumed would someday be exposed (silly boy!), and he didn’t want to be seen by history as having been duped. Nor does Eisenhower or De Gaulle mention gas chambers in their memoirs of the war. Even Elie Wiesel, the P.T. Barnum of Holocaust huckstering, makes no mention of gas chambers in his tone-setting Night, which chronicles his time spent in Auschwitz.

Not far from Steven Spielberg’s video trove of black comedy in Los Angeles is the Museum of Tolerance, founded by Simon Wiesenthal. Several years back a well-versed revisionist, David Cole, heard that amongst the museum’s displays was a film purportedly showing Jewish kids being herded into a gassing van by grim-faced, rifle-toting Nazis. Cole contends that no such homicidal vans existed (and, in fact, none has ever been found), so he was curious where Wiesenthal had found the contradicting footage. Through some diligent research, he found the obscure, fictional movie made in Poland from which the scene was purloined. Further research led to the Polish producer, who was incensed to learn the museum was showing his work without paying him a cent in royalties.20 I suspect the museum is no longer showing that bit of “documentary” evidence.

Some attempts at finding physical evidence to back up the Holocaust story have proven equally farcical. For instance, there’s the case of the Operation Reinhardt camps – Treblinka, Sobibor, and Belzec. Supposedly, hundreds of thousands of Jews were gassed and buried in mass graves, later disinterred and cremated in these camps (of which nothing remained but empty fields at war’s end). Revisionists say “no way.” They contend these “death” camps were actually transit camps, in which Jews being deported to areas occupied by the Germans in eastern Europe were processed. Who’s right could be proven quite simply by taking core samples to determine if the subsoil has been disturbed, i.e., pits were dug for burying the bodies. If pits, then death camps; no pits, then transit camps. But the Jewish authorities won’t allow this simple test to resolve one of history’s great mysteries to be performed.21 They did, however, allow an archeologist to do some digging at Treblinka. She dug a pit about four feet by six feet using the best archeological methods, expecting to find bones, teeth, ashes, and the like. She got down a couple of feet without finding anything; then “Eureka!”, she struck pay dirt: a tooth!... a SHARK’S tooth.22 So much for the archeological evidence!

One consequence of the history of the Second World War being reduced to little more than a carnival House of Horrors is that even true believers get duped. An Israeli group called “March of the Living,” which takes young Jews on tours of Auschwitz - traumatizing them for life with the grimmest of fairy tales - includes in their promotional material this photo of a pile of smoldering corpses:23 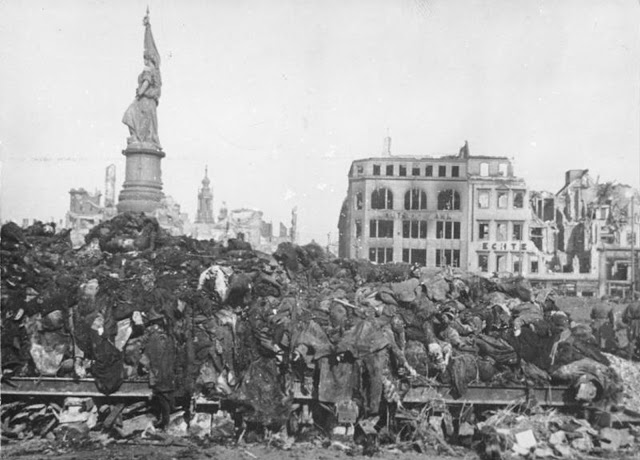 The tour organizers must have assumed any pile of dead bodies from the war era must be Jews. In fact, the photo is of Germans killed in the Allied firebombing of Dresden in April 1945.24

Similarly, when Phil Donahue had two prominent revisionists on his popular talk show in 1994 (if only such could happen today on network television!), he used photos of the fake gas chamber at Dachau to counter the revisionists’ claim that there were no gas chambers. Donahue became so flustered when this was pointed out to him by one of the revisionists, he revealed he didn’t even know if the photos were of Dachau.25

I’m sick of laughing at the farcical version of the Holocaust story. It’s time that tragic event was given the honest, factual remembrance it deserves and to stop imprisoning those who seek to tell the true story. It’s time to turn this tragicomedy into a bona fide history lesson.