Bradley R Smith, the Holocaust revisionist famous for spouting his views through advertisements in college newspapers, is making waves at Hofstra University.

The full-time gadfly has submitted a 24-page booklet portraying death camps as far-fetched sob stories to college newspapers across the country.

While Liz Johnson, editor in chief of The Review, refused to publish the insert, the editor of The Chronicle at Hofstra decided to take Smith’s money and run “The Revisionist.”

Johnson’s decision is an about-face compared to 1997, when The Review ran a column and an ad by Smith.

His presence permeated the Dec. 5, 1997 issue of The Review as a plethora of his theories, combined with several shaky editorial decisions, made up the infamous edition.

Ultimately, the combination of the two coalesced into a strong campus and community backlash similar to what is currently occurring at Hofstra.

Smith, famous for slipping his radical revisions into the hands of college journalists, submitted a column to The Review that semester describing the Holocaust as a collection of false “gas chamber tales.” The fall 1997 editors placed it cm the editorial pages.

Smith also submitted an ad offering $50,000 to anyone helping to air his Holocaust denial cm national television. The ad department ran it for $200, the usual rate.

A staff-produced cartoon joined Smith’s column on the editorial pages. The tongue-in-cheek cartoon depicted university rugby players as Hasidic Jews refusing to testify against each other. (Amy Grossberg’s Jewish mother was then making headlines for refusing to testify at her daughter’s trial at the same time as the rape trial of a university rugby player.)

And a glaringly false Dec. 25 folio line on the top of the editorial page, viewed by many as yet another dig at the Jewish community, not only topped off the slanted editorial pages, but The Review’s suddenly questionable reputation as well.

The former Review staff, headed by then Editor in Chief Leo Shane III, found itself roasting in a fiery debate that winter, fueled by an angry crowd of students, religious leaders and community members.

The staff members dismissed the anti-Semitic charges directed at them, but eventually claimed fault in creating the controversy.

It was a case, they insisted, of irresponsibility and bad judgments on the part of several student journalists who has been duped by one crafty revisionist writer.

“We printed something very hurtful to the community without knowing it and not thinking of the consequences,” Shane said. “We became Bradley Smith’s disciples because we let our guard down.”

An autopsy of the issue revealed the events"that helped Smith find a temporary home in the pages of The Review.

Preoccupied with impending finals, The Review’s reporters failed to supply enough copy for the issue, so desperate editors said they filled the blank pages with what was handy—Smith’s column. While some editors said they used it because they saw no factual errors, Shane said he was not aware of the column.

Amid this miscommunication and shaky staff decisions came the cartoon. It was unrelated to Smith, and, out of context, not nearly as explosive.

English professor and Review advisor Ben Yagoda, who is Jewish, said he even thought it as “kind of funny, clever.”

But when viewed with the other Jewish-related commentary of the issue, the sketch was viewed as more cause for concern.

The final blow, the Christmas deadline looming over the image of the religiously converted rugby team, was said to be one more mistake committed by harried Reviewers. Though the staff cried coincidence rather than ill will, some found the coincidence hard to accept.

Hillel Executive Director Renee Shatz recently said the explanations were not enough to calm her churning stomach, but admits these blunders could and probably did occur—with the exception of the folio line.

“Its a very sore point,” she said. “The whole thing is just a little too ironic—there is a shadow hanging ova- The Review.”

In any case, Shatz said, all the excuses in the world could not have saved the newspaper once this particular issue crept through the campus and community.

Rabbi Elizer Sneiderman, director of the university’s Jewish social service organization Chabad, recently said he was furious at that issue of the newspaper.

"At the time I thought there was conspiracy and malice associated with the events,” he said. “It seemed like someone was using the paper as an attack on the Jewish community.”

“They wanted to storm The Review’s offices and gather up all the papers and bum them,” he said.

“Flyers were circulated with the cartoon from The Review and a cartoon from Nazi Germany saying What difference does 50 years make?”

These dark clouds did not hang solely over the student journalists. A later Hillel meeting re-directed energy to the administration, Sneiderman said, where students decided President David P. Roselles tone was distant. They responded with a massive e-mail campaign in the hopes of shutting down Roselle’s server.

Roselle had questioned the newspaper about the ad, column and cartoon, but not to the satisfaction of those angered by the issue.

Review advisor and English professor Harris Ross said Roselle was right to reject any responsibility, though. Ross said he was much more concerned with the staff’s acknowledgement of blame.

Ross said the staff originally defended the inclusion of the ad and the column under First Amendment rights—the very reason, Smith says, that newspapers should print his Holocaust denial.

“But we couldn’t grab onto First Amendment issues retroactively when in reality we didn’t even know what we were printing,” Ross said. “We had to apologize or be willing to accept material from every hate group that came along.”

Advisors continued to push for an apology, and the next issue of The Review included one. However, the apology spawned more anger than satisfaction.

“The Review apologizes for any confusion,” it read. “This paper serves as a public forum for debate and columns and paid advertisements do not necessarily reflect the attitudes of the viewing our procedure for accepting advertisements and columns.”

The Review was deemed remorseless by many, but the friction began to ease at a meeting at the Wesley Foundation shortly after the apologies publication.

Laura Lee Wilson, executive director of the Wesley Foundation Campus Ministry, said the meeting was the beginning of a resolution.

“There was a real cooperative spirit of healing and a far better understanding of the pain created,” she said. “I think the first apology was still out of intense ignorance as well as some arrogance. It was not sincere because they were told to do it. But the meeting brought about a different level of feeling.”

Shane dropped his First Amendment shield and agreed to work with university religious leaders. Together they constructed a longer and more apologetic letter to Review readers.

“Smith had a lot of ridiculous views, but a bright enough mind to dupe people into printing this,” Shane said. “I just didn’t read everything and this guy is smart.”

As time passed, some campus leaders softened their harsh judgments on the student journalists. 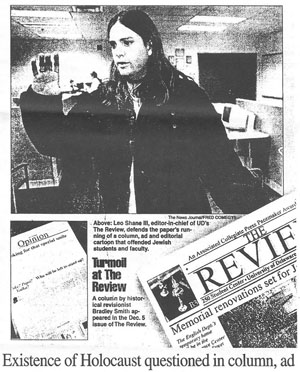 Sneiderman said, “Some of my anger faded. From the outside, we think [The Review] is an organization that really knows what’s going on, but then we realized its just a bunch of students who may make mistakes and editors not necessarily going over everything with a fine-toothed comb. “These people are inexperienced.” While inexperience could be used as an excuse, general circulation newspapers across the country staffed with professional journalists and advertising personnel make similar mistakes.

Sam Martin, the News Journals ad director, said he has been amazed at some of the items his staff has missed.

“Quite frankly, some things slip in,” he said. “A couple of times I’ve looked at the paper and gone, Whoa, how did you let that get in there?”

“One thing that struck me is how ignorant they were about historical facts,” Sneiderman said. “I brought in a picture book of the Holocaust and one editor said, ‘Well, can’t I question the Holocaust’s existence?’ and he wouldn’t look at the pictures.

“When he finally did, he started crying.”

Another unfortunate aspect of Smith’s ads is the way he uses students, said Sara Horowitz, former director of Jewish studies at the university.

“Smith doesn’t try to put his ads in the New York Times,” she said. “He is trying to trick students. They have a measure of rebelliousness and skepticism and Smith is trying to tap into this. If I were a student, I’d be offended. He’s looking for an easy mark.”

Manipulating the young and impressionable is widely recognized as Smith’s specialty. Once he convinces fledgling journalists that he has every right to their paper, Shatz said, he then sits back and maximizes on the media attention.

“The News Journal reported this whole mess on the front page,” she said. “Reporters were swarming the campus looking for interviews. It was really blown up. This exposure fed into what Smith really wanted the attention. CBS News Magazine, 60 Minutes, they all had whole segments on Smith.”

While many complain journalists reporting on Smith only give him the attention he craves, others, like former Hillel president Janice Selekman, said they realize Smith will continue sending out his controversial ads and columns regardless.

“If we don’t keep the conversation alive, it will happen again,” said Selekman, current chair of the university’s nursing department.

With about 25 percent of students being new to the country’s college campuses every year, institutional memory is not exactly a strong point. Keeping Smith and his campus project a hot topic may be a college newspapers only defense.

And, according to Shane, this is one university that better keep up its arms. “The Review is now on Smiths A-list,” he said. “The Review is going to get that ad until he kicks the bucket.”