A Record of Repression in Helvetia
by Mark Weber
Published: 1998-10-01

Jürgen Graf and Gerhard Förster are by no means the first persons in Switzerland to be attacked or punished for their revisionist views. They certainly won't be the last. Indeed, it appears that during the past year Swiss authorities have been cracking down on dissidents with noticeably greater severity.

In 1986 a teacher in Lausanne, Mariette Paschoud, was dismissed from her teaching position following a media smear campaign because she had expressed skeptical views on the Holocaust issue. More recently, because she had asked for a single piece of proof for the existence of gas chambers, Switzerland's highest court solemnly declared in May 1995 that Paschoud disputes "the most serious crime of the National Socialist regime, namely the systematic gassing of Jews in gas chambers." 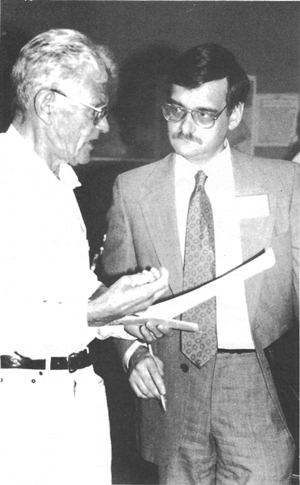 Arthur Vogt, a retired educator, is the first person to be punished by a Swiss court for expressing dissident views on the Holocaust issue. Here at the 1994 IHR Conference he speaks with Mark Weber about revisionist work in Europe.

In November 1986 the Geneva police chief forbid two French revisionists – writer and publisher Pierre Guillaume and author Henri Roques – to hold a news conference in the Swiss city. The two were also banned from speaking publicly in Switzerland for three years.

During the 1970s and 1980s, Dr. Max Wahl, a retired Swiss jurist, came under repeated attack from pressure groups and some of the media for his punchy nationalist and pro-revisionist newsletter, Eidgenoss. In October 1991, a Munich court fined him 25,200 marks (about $17,890) for the newsletter. (After 18 years of publication, he closed it down in early 1995.)

In January 1993, Bernhard Schaub (a father of two) was fired without notice from his position as a teacher of history and German at a private school in Zurich because he had expressed doubts about wartime "gassings" of Jews in a book he had written. His 1992 history of German-speaking central Europe, Adler und Rose, had also prompted the usual media smears. (See Schaub's essay, "Switzerland in the Grip of the 'Traditional Enemy'," in the July-August 1997 Journal, pp. 32-35.)

The first Swiss citizen to be brought before a court for expressing revisionist views was Arthur Vogt, an 80-year-old retired secondary school teacher. The country's first Holocaust revisionism trial was held on May 31, 1997, in the district court of Meilen. A few days later, on June 3, 1997, the court declared Vogt guilty of "racially discriminatory propaganda and repeated racial discrimination," and fined him 20,000 francs (about $15,000). Specifically, he had broken the law by mailing copies of Graf's "Cause of Death" book to seven acquaintances in Germany, and had mailed out copies of a newsletter that included Holocaust revisionist essays he had written.

In December 1997 publisher Aldo Ferraglia, an Italian citizen, was tried by a court in Vevey for having distributed several revisionist titles, including the anti-Zionist book of French scholar Roger Garaudy, Les mythes foundateurs de la politique israelienne. Ferraglia was sentenced to four months imprisonment, and ordered to pay 28,000 francs "atonement" to three Jewish organizations, as well as to pay court costs of 15,075 francs. The court took care to note that the country's new Anti-Racism Law "does not prohibit opinions, but rather only their public expression." The country's leading daily newspaper, the Neue Zürcher Zeitung, devoted not a single word to the Ferraglia trial.

Gaston-Armand Amaudruz, a retired foreign language teacher who lives in western Switzerland, has recently been indicted for having circulated revisionist books, and for essays in two issues of his mimeographed newsletter. Born in 1920, Amaudruz has published Courrier du Continent (BP 2428, 1002 Lausanne) since 1946. It has about 500 subscribers, many of them outside the country.

In recent weeks the Swiss Federal Police has been struggling to combat "racism" on the Internet. The Neue Zürcher Zeitung reports (July 31) that the effort has been hampered by the technical difficulties inherent in the freewheeling Internet system as well as by legal uncertainties. For one thing, nearly all of the alleged 700 "racist and right wing" Internet web sites are outside of Switzerland, many of them in the United States.

On August 19, 1998, Swiss police arrested and jailed Ernst Indelkofer, publisher of Recht + Freiheit ("Justice and Freedom"), a magazine with nearly 4,000 subscribers that has supported freedom of speech for revisionists. On September 18, 1997, the Basel city criminal court handed down a fine of 3,000 francs (as well as a three month prison sentence, which was suspended) against Indelkofer because he had included revisionist passages in three issues of Recht + Freiheit. After two weeks in jail, he was released on September 2, 1998.

Among the "offending" passages cited by the court were such banal sentences as the following: "A photograph of corpses [as taken in the just-liberated German camps] actually proves nothing about the time it was taken, nor how it came to be taken, or about the ethnicity [of the victims shown]." Similarly objectionable, the court found, was a reference by Indelkofer to an "alleged systematic mass extermination of the Jews." Also offensive, the court declared, was a mention of a North American television broadcast that provided "revisionist (corrective) information about the Auschwitz Holocaust, and which was therefore countered by Jewish circles."