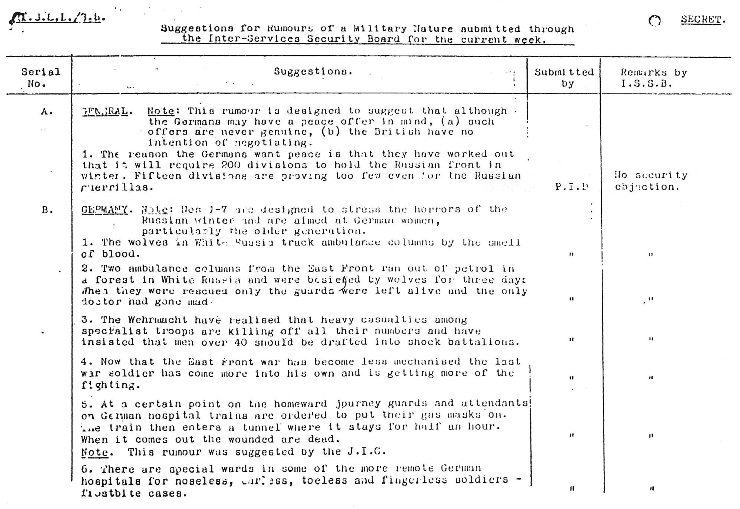 Manufactured "rumors," designed to mislead and demoralize the German public during the Second World War, were proposed to the British War Cabinet's Joint Intelligence Sub-Committee in October 1941. "Rumor" number five, which was suggested by the Joint Intelligence Committee, is a story that the Germans were using poison gas to secretly kill off their own wounded soldiers. This document, and other records of this Committee, were kept secret until earlier this year, when they were released to the Public Record Office in London. This document is reproduced in facsimile from The Independent Magazine (London), March 27, 1993, p. 59.

"'It's a sad fact,' said the principal philanthropist of the grotesque Simon Wiesenthal Center in Los Angeles, 'that Israel and Jewish education and all the other familiar buzzwords no longer seem to rally Jews behind the community. The Holocaust, though, works every time.' His candor was refreshing, even if it was obscene. On the subject of the extermination of the Jews of Europe, the Jews of America are altogether too noisy."
—Leon Wieseltier, literary editor of The New Republic, writing in the issue of May 3, 1993, p. 20.