How German and American Money is Spent in Israel

It ought to be general knowledge that Israel can survive only because it receives massive funding mainly from two nations: Germany—by manipulating public opinion with an imposed German guilt complex—and the United States as a result of the enormous political influence of American Jewish lobby groups. The reasoning behind unconditional support for Israel is that after the ‘Holocaust,’ the Jews deserve their own country so that they have a safe haven in the future. How concentrating millions of Jews on a small strip of land surrounded by hundreds of millions of extremely hostile people can possibly be called a safe haven, is a riddle in and of itself. Such a setup almost asks any would-be exterminator for a sweep ‘final solution’ of the Jewish question in the Middle East.

As a result of this situation, the Jewish attempts to turn ‘their’ homeland into a fortress become more and more grotesque. While the U.S. was preparing to go to war against Iraq, arguably the potentially most dangerous opponent of Israel, Israel re-invented ‘The Wall:’ it started erecting a huge concrete wall around the occupied Gaza area to contain the local Palestinian population. It certainly is not intended to keep the Jews within, as the Berlin Wall was built by the communist east German regime to keep its citizens from fleeing, even though this wall is looking shockingly similar to the former Berlin Wall. This wall, however, is supposed to protect the Jewish occupational power from the risk of any hostile intrusion, similar perhaps to the ancient Roman Hadrian Wall in Scotland or the Limes in Germany. Each mile of this wall costs roughly one million dollars, made possible because of American and German funds. It is a perfect expression of the Zionist paranoia of permanent siege. Not only every Israeli Embassy looks like a small KZ (concentration camp)—with the decisive difference that the watch towers are directed outwardly—now all of Israel seems to be slowly transferred into a huge fortress secured by massive walls and guarded by terrifyingly looking watch-towers. 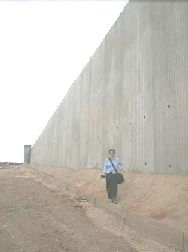 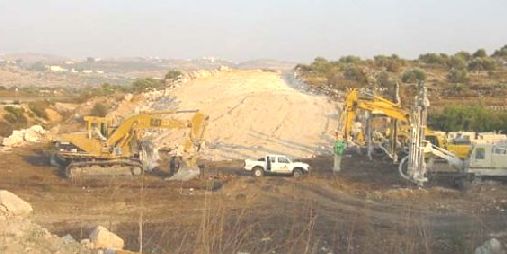