How Many Times (and Places) Have You Been Banned?

While studying tax accounting, I became familiar with the adage, “If you aren’t being audited (by the IRS), you’re paying too much tax.”

Something similar with respect to representing the revisionist point of view in the Comment threads that are still quite numerous across the Internet comes to my mind. If, commenting in support of the revisionist point of view in accordance with the CODOH article “You, Too, Can Be a Comment Commando,” you haven’t gotten your online self (selves) banned at a Web site or two, maybe you’re not doing it hard enough. Or, maybe I’m doing it too hard—fortunately, I have far more “selves” than the cat’s legendary nine lives, and so do you.

I, of course, am a Comment Commando, and have been for many years, in accordance with Jett Rucker’s fine article linked above. And I’ve been shot down a few times, too. Fortunately, both of the places where I’ve been banned use the commonly seen comment engine Disqus on their posts, so I can reproduce verbatim exactly those comments that got me banned. Perhaps other aspiring comment commandos (you?) might find the particulars of some interest. 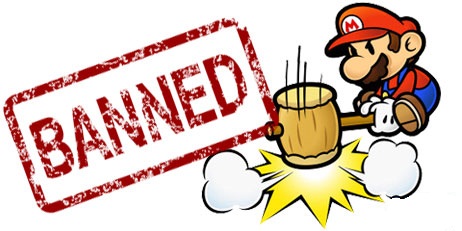 The two sites where I’ve been banned under my present byline (here) are the History News Network and the blog of the Independent Institute of Oakland, California (many Web sites use the word Independent in their names). I have a long history with both sites, actually in more than just my present persona (Momma and Poppa MacVie’s little boy Ezra). While sometimes a series of serially escalatingly provocative comments might spur a banning perhaps after a warning, these two instances seem more-sudden; I can’t rule out the possibility that Disqus itself might post or disseminate to sites using its product lists of “troublemakers,” among whom I might now proudly number. And yes, you can get kicked off Disqus itself entirely. One of “you,” anyway. What you’d have to do for that remains undiscovered, to me, for now.

Regardless, here’s the comment, complete with the name of the site and the name of the article (which you thus can look up) I was commenting on, that snapped a streak of over a month’s length of gradually bolder comments on the many articles on that site that invited such commentary:

Deborah Lipstadt took one Holocaust denier to trial, but the death of another – Ernst Zündel – prompted her to say trials might make these fi…

Deborah Lipstadt took NO ONE to trial. David Irving took HER and her publisher to trial in England for libeling him. The judge ruled against Irving, as he had to under overwhelming pressure and Lipstadt's publisher's $13 million defense campaign. Maybe you could say she WENT to trial to defend against Irving's charges. She (her publisher) COULD have just paid him his very modest claims (FAR less than $13 million) and kept it out of court.

The reason "Holocaust deniers" can gain so much "sympathy" is because their attacks on the Holocaust legend itself are so sound. But Lipstadt couldn't put it THAT way, could she?

Here is that article, without my offending comment. It’s fascinating to note that they changed the headline (compare with the one above from Disqus) in accordance with my complaint—but deleted my comment and banned me. And here’s the comment that, within seconds after I posted it, got me banned from the Independent Institute:

Atomic Bombs: What My Momma (Never) Told Me

WHY is it acceptable, even fashionable, to debunk Allied propaganda regarding the holocaust visited on Japan, but NOT acceptable (illegal many places) to do the same regarding the Holocaust (capital H) in Europe visited upon Jews and others around the same time?

Correction of the accounts of the Holocaust visited upon the Germans by the Allies lies somewhere between the two mentioned above, it seems.

Here’s that article in full. It’s interesting to note that, before I was banned, I happened to make two more comments on the same article, and they’re still there. This is in stark contrast to History News Network’s scorched-earth approach, in which they went back and deleted every one of my comments on any and all articles on their site, ever.

As you can see, neither of these sites is any sort of overtly Jewish site, like the sites of the World Jewish Congress, or even that of Ha’aretz, Israel’s most-prominent international (English-language) newspaper. One might hope at least that one might voice sincerely held viewpoints on historical matters politely and where possible with reference to evidence. But, no. Atomic bombs? Yes. The Holocaust (the one with the capital H)? No. Maybe it’s those gas chambers. Or the victims …

When I’m making these comments, which I do virtually every day of the week, of course I peruse the other comments, which can number in the hundreds. For the most part, I’m looking for those still, small voices that might happen, however timorously, to venture viewpoints even remotely similar to mine (those opposing it are, of course, numerous ad nauseam). I find vanishingly few of them, which has over time left me feeling pretty lonely, as though I were the only one doing this.

But then it occurred to me: my compatriots are all like me! Banned, and forever silenced. That’s why I see no potential allies in the serried ranks of commenters inflamed by the insufferable horrors of the Holocaust. We’re all martyrs to the Comments thread (a lot better than being a real martyr, 77 virgins or no).

But that’s no explanation. On the Internet, we’re immortal. Myself, though I haven’t “lived” them all as yet, I have a thousand lives. I’m already back in the lists on these sites in yet another disguise (you didn’t think MacVie was my real name, did you?). What do you think my “name” is now? What name should I choose when my new, present persona dies a hero’s death on the spears of the Comments Moderator?