The opponents of revisionism—not counting the billion-dollar reparations programs—collect and spend as much money in a week as all the world’s revisionists in a year. If in 2014, revisionism commanded as much as a whole million dollars , the Holocaust memorials and theme parks, genocide-studies departments of a hundred universities, and anti-Semitism monitors of a dozen governments easily spent more than $52 million, or maybe ten times that much.

So when, in 1995, $7.5 million dollars became available to the Institute of Historical Review, then of Torrance, California, there should have been an upwelling of revisionist research, publications, events, and activity of every description. Right? You’d be wrong, of course, to expect any such thing. The massive windfall of money inherited from the death of a wealthy friend of IHR founder Willis Carto had the ironic ultimate effect of putting the IHR into what might as well be called suspended animation so far as revisionism is concerned, as well as locking up the many irreplaceable classic revisionist studies to which the IHR had acquired either the publication rights, the only usable manuscripts, or both, of authors both living and dead. The story of how this paradoxical effect emerged from what should have been the long-awaited ignition spark for revisionism is a long story covering many years, and many colorful personalities together with the destructive conflicts they entered into over this very same money.

By definition, or perhaps by a process that might be called “social selection,” revisionists are (remember—I AM one) … quirky. From the get-go, we don’t overly trouble ourselves to fit in with the larger numbers of those around us, though some of us can be quite personable in the odd moment. We’re inveterately independent-minded, of course, and as one might expect the followers of such counter-cultural notions as we do, we’re likely somewhat more convinced of the correctness of our conclusions, or at least of our doubts, than most of the rest of the herd. Willis Carto and his benefactress, Jean Farrel, granddaughter and heiress of Thomas Edison, certainly filled that bill, and other actors in the international, decades-long drama also did so, if less flamboyantly.

An exhaustive chronicle of the affair (see tinyurl.com/pz6psrw) was recently posted on CODOH’s web site by a peripheral participant—peripheral here meaning that Germar Rudolf never got any of the money, nor did he in fact try to get any of it, other than to finance his extensive revisionist activities, which he conducted entirely without any IHR money, and to boot without more than cursory cooperation from them. Rudolf’s accomplishments during the period in question are, in fact, at least partially listed in his post, along with those of the IHR during the same period for purposes of comparison. What (more) he might have done with at least cooperation, if not outright assistance from Jean Farrel’s beneficiaries is a fascinating conjecture.

In his exhaustive account, Rudolf documents the IHR’s decline since the ouster of its founder Carto, but he mercifully skips the multifarious details[*] of the legal and illegal infighting that occurred between Carto and those who ultimately succeeded him at the helm of IHR, led by present director Mark Weber. He also omits to mention that Carto today apparently still presides over a publishing and media empire considerably larger and more-active than today’s IHR: the Barnes Review, between 2010 and 2014 host to the Holocaust Handbook series of Holocaust history, and much, much more having to do primarily with “conspiracy theories.” The (mainstream) Holocaust narrative is the only conspiracy theory it debunks; the others, it seems to take much more-seriously.

Despite our quirks, revisionists are also, contrary to the imputations of our opponents, human in all the best and worst ways. Carto was, perhaps, rather more-human than most of us; the word “colorful” doesn’t quite capture the man’s verve, daring, and sheer brass. But he ended up literally facing the gun of one of his opponents, and his nerve fortunately ran out somewhere short of getting himself killed. Carto today is 87 years old. Weber and company, with his control unshakable and his pension plan not only fully vested but fully funded, seems intent on riding the non-profit at least to the end of his days (he’s now 63). 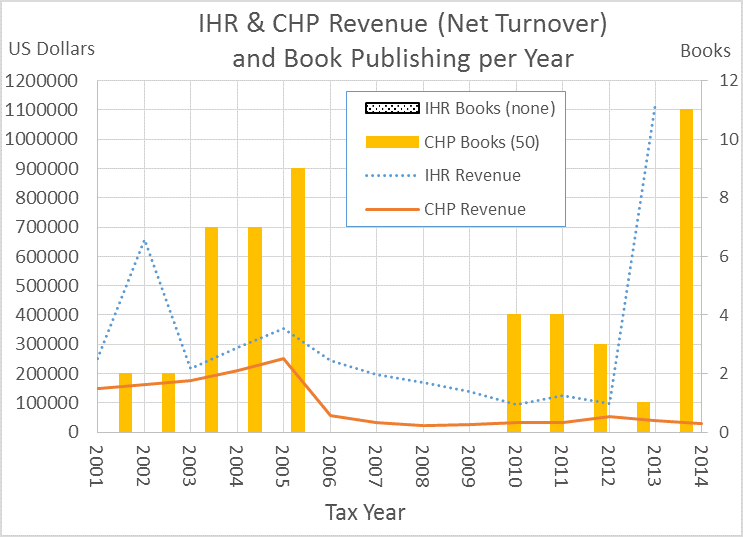 In this chart, taken from Rudolf’s internet article mentioned in this paper, Rudolf has tracked two properties:

2. The bars show the number of new revisionist books (excluding mere new editions or reprints) which Rudolf published either as a publisher (until 2005) or then as the responsible editor (starting in 2010). The IHR has not published any new books since 2001.

The IHR, despite publishing no periodical and virtually no new book titles (see Rudolf’s account), continues to seek and gratefully accept contributions, and donors subject to US income taxes receive the benefit of being able to deduct their donations from their taxable income. That’s right—possibly alone among overtly revisionist organizations, the IHR is a tax-exempt organization recognized by the IRS. That precious—and prestigious—license is perhaps the crown jewel in the legacy that Weber and crew defend to the death (the IHR’s death, not theirs).

But, again as detailed in Rudolf’s indictment, the IHR apparently once guarded the intellectual property it had acquired to the extent, in the case of Arthur Butz’s magisterial The Hoax of the Twentieth Century, of encrypting the print-ready file it had of the work. Rudolf “liberated” this revisionist classic, which was out of print until he did so. He recounts many other instances of being stymied in one way or another in his efforts to revive other out-of-print titles by the IHR’s apparent intention or hope to return at least some of them to print and add them to its publications list, which it continues to circulate by both postal and electronic mail at regular intervals. This recalcitrance on the IHR’s part makes the organization in effect an agent of the forces opposing revisionism in that it keeps many important, persuasive and informative literary works “on ice,” preventing their publication. Copyright law often seems to serve the purposes of those who wish to suppress the dissemination of opinions and research findings, and this would seem to be a particularly vicious instance of the phenomenon, quite aside from whether the upshot is actually anyone’s actual intention.

Revisionism’s opponents, of course, receive bequests such as the one acquired by the IHR from Edison’s granddaughter on a regular basis, at least if one regards the opponents in aggregate. Does this massive inflow of lucre disrupt the mission of this Empire of Evil? No, not really, if only because it is so constant, and so huge. Norman Finkelstein’s 2000 best-seller The Holocaust Industry, details how staggering the scale of the money is on the other side. We’re talking BILLIONS, here, with senators’ (Al d’Amato) and Nobel laureates’ (Elie Wiesel) snouts in the trough. Sure, kerfuffles occur, though not always directly about money. Tova Reich, wife of Walter Reich, briefly head of the US Holocaust Museum and Memorial, had recourse to fiction (My Holocaust, 2007) in her book (see amzn.com/0061173479) about the infighting and callous greed so widely on display in the precincts of that august institution. There, however, most of the many millions came annually from US taxpayers, so there was nothing of the one-shot phenomenon that dominated the scene over at the piddling little IHR.

For revisionists and revisionism, the IHR is long over and done; if you want tax deductions, consider the Humane Society, or perhaps cancer research. The Anti-Defamation League and the Southern Poverty Law Center, of course, offer very much the same tax benefits, but their agendas are in fact hostile to those of many of the readers of this journal, as most of us already know quite well.

If, on the other hand, you’d like to contribute to Holocaust revisionism and tax deductions be damned, then your prospective beneficiaries are very much out here, willing and able to accept donations and put them to good use. Think of our names and addresses (or URLs) as a bit like the truth about history itself: hard to find, but very rewarding once you’ve done the legwork.

[*] A good overview of the war was posted in 2012 by Carolyn Yeager on her web site at http://carolynyeager.net/battle-ihr.