A doctored wartime photograph of the Auschwitz-Birkenau camp displayed by the Simon Wiesenthal Center on its “educational” web site is a good example of how the influential Holocaust organization falsifies history.

The Center posts the photograph on its “Multimedia Learning Center Online” web site under the heading “Photo Gallery: Hungarian arrivals after the ‘Selektion’ at Auschwitz” (http://motlc.wiesenthal.com/gallery/pg22/pg0/pg22035.html [the photo was removed from that website in 2000; ed]). Dated “June 0, 1944,” the photo is captioned: “As these prisoners were being processed for slave labor, many of their friends were being gassed and burned in the ovens in the crematoria. The smoke can be seen in the background.” 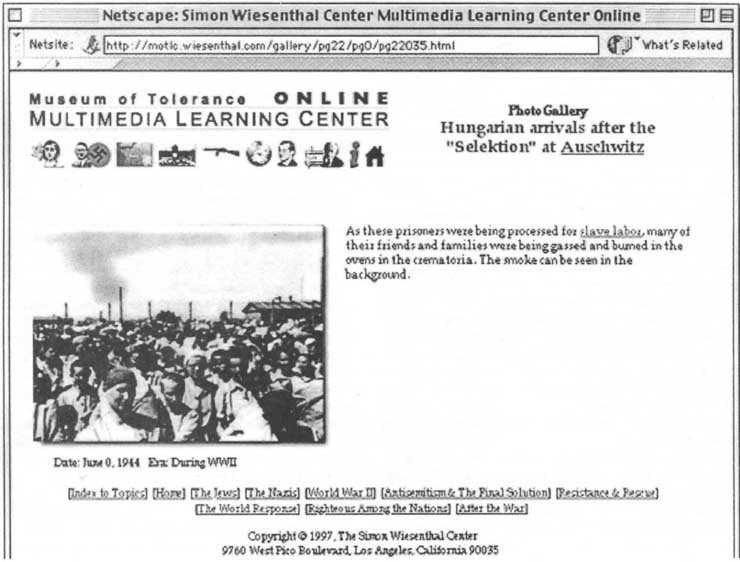 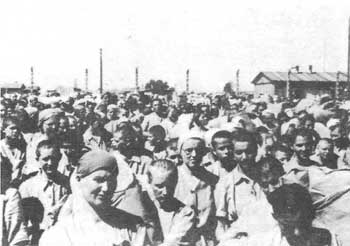 The original photo, from "The Auschwitz Album" (1981), shows no trace of smoke.

The photograph has been altered by adding phony “smoke” to the background, apparently to support survivor testimony about smoke billowing from Birkenau crematory chimneys. The fraud is obvious with a glance at the original photo, which is published in The Auschwitz Album (New York: Random House, 1981), page 126 (photo No. 143).

The 185 photos of Auschwitz-Birkenau camp in this album appear to have been taken by German SS camp officials in 1944 – that is, during the supposed high point of the alleged extermination program there. The original album was confiscated by a Jewish inmate, Lili Jacob Meier, who brought it to the United States after the war.

In none of the album’s many photos – several of which show Birkenau crematory facilities – can one see any trace of smoke. Similarly, there is no trace of crematory smoke in any of the Allied aerial reconnaissance photos taken of Auschwitz and Birkenau on random days in 1944. Cremation specialists affirm that crematories do not produce visible smoke. In short, the available evidence does not support the “billowing smoke” claims of many former inmates.

The Simon Wiesenthal Center, based in Los Angeles, is one of the world’s foremost Holocaust organizations, as well as a major Jewish-Zionist pressure group. Reflecting its considerable media influence and political clout, accommodating lawmakers have diverted at least $10 million in taxpayer funds to the Center. The Center claims more than 350,000 dues-paying members, each of whom receives its glossy magazine, Response. Over the years the Center has repeatedly attacked the Institute for Historical Review.

In 1991 its Response magazine broadcast the outrageous lie that Iraq was killing Iranian prisoners of war “in gas chambers specially designed for the Iraqis” by a German firm, using German-manufactured Zyklon B gas.

(This doctored “smoking chimney” photograph was brought to our attention by Canadian geologist and aerial photo specialist John Ball, who reported on this on his web site: http://www.air-photo.com/english/1999_mark.html. Author of The Ball Report, he also addressed the 1994 IHR Conference.