How to Become a "Saint" and Get Canonized through Yad Vashem!

The Italian daily Corriere della sera had called upon relatives or friends of “Holocaust” victims to submit their names to the Yad Vashem Memorial in Jerusalem «con la promessa che verranno verificati e inseriti nel database» (certifying that these names will be checked then inserted in the database). The person in charge of the Olodogma site played a little prank (which incidentally was not his first) in order to demonstrate that the database of Yad Vashem Memorial is far from reliable.

“Yet again we are in a position to prove that the estimate of holocaust dead as put forward by Yad Vashem Memorial of Jerusalem is not credible, because anyone, with a few clicks, may feed a false identity into its database. From just one name to an infinity of names. It is merely a question of the time you have on hand and of the will to do so…. Or a question of need …” 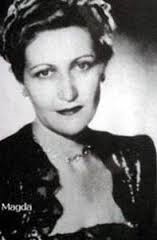 Edith Frolla
(Only at Yad Vashem)

Olodogma displays a screen capture from the site of Yad Vashem (one might guess that it won’t be there for long) proving the recording of a totally fictitious gassed victim invented for the sake of demonstration by revisionists—in this particular case one Edith Frolla!

“No one checked the slightest element! No control! Not even the picture! And then one tells us that Yad Vashem Memorial, which is to Holocaustianity what the Vatican is to Catholicism, abounds with irrefutable ‘proofs’ testifying to the millions of victims of said Holocaust. One is almost bound to laugh heartily!”

As for the antirevisionist law which was on the verge of being passed in Italy, it seems that it is presently taking a nap at the bottom of some drawer in some Roman ministry.