In 1993, the Israeli Supreme Court ruled that John Demjanjuk was not guilty in regard to the allegations that he was the notorious guard of Treblinka known as "Ivan the Terrible." His United States citizenship was restored shortly thereafter.

The Justice Department's Office of Special Investigations (OSI) has recently revived the 24-year old case by bringing a new legal complaint against the Ukrainian born retiree. They claim Demjanjuk was a guard in other Nazi concentration camps and that he lied about his wartime activities in his application to enter the United States in 1951. Commenting on the matter, an official of the Anti-Defamation League (ADL) called the renewed OSI campaign "a matter of justice and the integrity of American citizenship."[1] Justice Department attorneys say war criminals must be prosecuted, regardless of their age.[2] 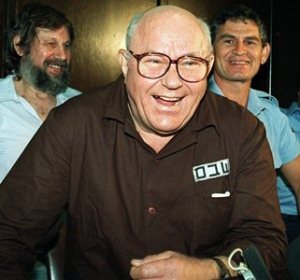 John Demjanjuk in Israel in 1992

Holocaust revisionism, the theory that the traditional view of the Jewish Holocaust contains lies, exaggerations and other falsehoods, is a serious threat to Zionist power and influence. Various governments have resorted to "war crimes trials" to combat its phenomenal growth. Indeed, Israel's former Attorney General, Yitzhak Zamir, publicly admitted that this was one of the major purposes of the Israeli Demjanjuk trial: "At a time when there are those who even deny that the Holocaust ever took place, it is important to remind the world of what a fascist regime is capable of… and in this respect the Demjanjuk trial will fulfill an important function."[4]

In 1993, as the case against Demjanjuk was falling apart, an Israeli prosecutor close to the case acknowledged a political motive for continuing the campaign. "So the important thing now is at least to prove that Demjanjuk was part of the Nazi extermination machine… otherwise… we will be making a great contribution to the new world-wide movement of those who deny the Holocaust took place."[5]

California psychology professor Kevin MacDonald has shown how Jewish groups, in attempting to gain approval from non-Jews, have often framed their purely parochial interests in terms of universal principles that supposedly benefit everyone.[6] With this in mind, I believe, the ADL and OSI made the renewed campaign against Demjanjuk appear to be in the interest of all Americans. At the risk of being redundant I will again quote the ADL official. The current campaign against Demjanjuk, he alleged, is "a matter of justice and the integrity of American citizenship." In short, parochial Zionist interests are cloaked in the lofty-sounding rhetoric of morality and patriotism.

The further prosecution of John Demjanjuk will only prolong the undeserved suffering of an elderly man and the entire Demjanjuk family, and possibly exacerbate the already existing tensions between Jews and Eastern European émigré groups. Another such trial does not serve the American ideal of justice. It is an example of selective justice or rather injustice;. the U.S. government makes no attempt to root out alleged Jewish war criminals, just alleged non-Jewish war criminals like Demjanjuk. Another trial serves the ulterior goals of the ADL and OSI in combating Holocaust revisionism, a dire threat to the entire Zionist juggernaut.

The hunt for and prosecution of John Demjanjuk is but one example of discrimination that Euro-Americans face. On the subject of war crimes trials, bias directed against non-Jewish, European émigrés is alive and well in the United States.