A major advance for historical revisionism in Europe is the appearance of a new German-language scholarly journal, Vierteljahreshefte für freie Geschichtsforschung. Now in its second year of publication, this "Quarterly Journal for Free Historical Research" offers first-rate writing and editing, and a high level of scholarship, presented in an attractively laid out and well-illustrated large-size magazine format. This periodical is a defiant response to Germany's increasingly tighter legal and administrative curbs on free historical research and writing. As a consequence of these restrictions, VffG must be published in exile.

The first, 58-page issue of VffG, dated March 1997, includes several essays by Germar Rudolf, thoughtful writing by Robert Faurisson on the Garaudy-Abbe Pierre affair in France, as well as several pages of short news items and a four-page listing (with descriptions) of German-language books available for sale.

The 82-page issue of March 1998 begins with a well-done editorial essay on the increasing repression of free speech and dissident historical scholarship in western Europe, along with several substantive articles or essays, four book reviews, five pages of readers' letters, and eight pages of short news items.

This issue contains a valuable eleven-page article by two German engineers, Michael Gärtner and Werner Rademacher, on the significance of the high ground water level at Birkenau (Auschwitz). Citing an impressive array of evidence, including confidential wartime German documents that only recently have become accessible to independent researchers, this article conclusively discredits often-repeated allegations that in 1941-1944 Auschwitz authorities disposed of hundreds of thousands of corpses of Jewish victims in "burning pits."

Also in this issue is a valuable nine-and-a-half-page essay by Italian scholar Carlo Mattogno, "The 'Gasprüfer' of Auschwitz," which cites revealing Auschwitz documents he discovered in Moscow archives. Quoted here for the first time, these documents further confirm the extraordinary measures taken by the German authorities to combat the terrible epidemics that ravaged the camp population and took so many lives. 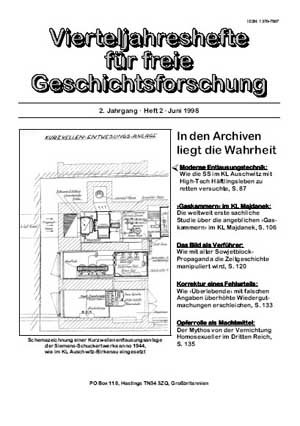 VffG editor Germar Rudolf (Scheerer), born in October 1964, is a certified chemist who was forced to flee his native Germany in 1996 for expressing dissident historical views. He is perhaps best known as the author of a detailed 1993 study that is widely known simply as The Rudolf Report. Written on the basis of an on-site investigation, chemical analysis of samples, and meticulous research, it concludes that the "gas chambers" at Auschwitz were never used to kill prisoners as alleged. [An English-language summary edition is available through the IHR for $5.99, plus shipping. (Check www.ihr.org for current availability and price; ed.)]

This "Technical Report on the Formation and Detection of Cyanide Compounds in the 'Gas Chambers' of Auschwitz" corroborates and strengthens the findings of earlier forensic investigations of purported Auschwitz "gas chambers," particularly that of American gas chamber expert Fred Leuchter. (For more on The Rudolf Report, see the Nov.-Dec. 1993 Journal, pp. 25-26, and the Nov.-Dec. 1994 Journal, pp.14-15.)

Following the publication of his Report, and protests from Jewish community leaders, Rudolf was fired from his position with the prestigious Max Planck Institute in Stuttgart. While he was still living in Germany, police carried out raids on his residence in 1993, 1994 and 1995, and he and his family were twice evicted from their apartment, once when his wife was eight months pregnant. 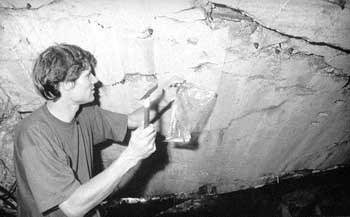 Germar Rudolf at Auschwitz-Birkenau, taking samples from the ruins of the mortuary cellar room – the supposed "gas chamber" – of crematory structure II.

A Stuttgart court declared that the Rudolf Report constitutes "denial of the systematic mass murder of the Jewish population in gas chambers," and therefore violates German laws against "popular incitement," "incitement to racial hatred," and "defamation." The judge in the case called Rudolf an anti-Semite who is "fanatically committed" to "denying the Holocaust." The court rejected Rudolf's request for evidence and expert testimony on the gas chamber issue because, it declared, "the mass murder of the Jews" is "obvious" (offenkundig).

After a German court in 1995 sentenced him to 14 months imprisonment, Rudolf fled the country to avoid serving the politically motived sentence.

German authorities went after Rudolf for his role in writing and editing the Grundlagen zur Zeitgeschichte. (On this work, see the report in the May-June 1995 Journal, p. 43.) In 1996 a German court ordered all remaining Grundlagen copies to be seized and burned, and it fined the publisher DM 30,000 (about $18,000).

Rudolf has also defended his findings, and the principle of free historical inquiry, in articles published in the German journals Deutschland in Geschichte und Gegenwart (Tübingen), Sleipnir (Berlin), and Staatsbriefe (Munich). On January 1, 1996, authorities in Munich raided the office of the publisher of the monthly Staatsbriefe to seize copies of issue 6/1995, in part because of an article by Rudolf. The police also searched for manuscripts of additional writings by him. Similar police measures have been taken against Sleipnir publisher Andreas Röhler, in part because of articles by Rudolf.

Rudolf's VffG journal is published in cooperation with the Foundation for Free Historical Research, or Vrij Historish Onderzoek (VHO), based in Flanders, Belgium. For some years now, the VHO Foundation has been one of Europe's most important revisionist publishing centers. From its headquarters near Antwerp, the VHO publishes and distributes a range of revisionist materials in Dutch, French, German and English, as well as an informative multi-lingual newsletter. (See "A Belgian Foundation Battles for Free Speech" in the Jan.-Feb. 1996 Journal, p. 46.)

Belgian authorities have not been pleased with the VHO's work. In response to the distribution at a meeting in November 6, 1997, of VHO booklets about the Goldhagen controversy, police recently carried out raids on four homes or offices of VHO associates. During these three raids – on November 21 and 29, 1997, and January 7, 1998 – Belgian police seized a large number of books and other items. However, they were unable to seize mailing lists, records of customers or similar information, because such records are not kept in Belgium.